Our charcoal grill has been in the garage for several weeks so we were very pleased to discover this method for cooking a perfect steak right on top of the stove. Along with the instructions on how to pull off this feat, we also found the recipe for a Soy Citrus marinade that is later cooked and incorporated into mayonnaise to make a very satisfying aioli to serve with the steak. We paired this with a simple Celery Root and Potatoes Anna that we cooked in the oven and our stand-by haricots verts.

We found the original recipes for the steak and aioli in Ruth Reichl’s new “Gourmet Today” cookbook. We’re still distraught over the loss of the magazine and the new cookbook did nothing to ease our pain. It’s just full of all the things we’ll miss about Gourmet. It opened your mind to trying new flavor combinations, going out on a limb but always with the understanding that Ruth herself was standing under the tree and wouldn’t let you fall. Of course, because I tend to ‘montefy’ a lot of what I cook, this recipe is a riff on Ruth, starting with the steak itself and then the aioli which we even changed the name of. 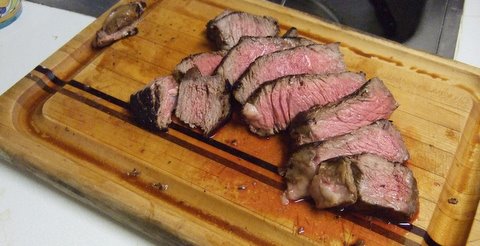 The original recipe called for London broil. We are all about thrift and London broil on the grill is a summer fixture. But when we got to the butcher’s counter, the price difference between sirloin and London broil was just $1.00 a lb. There was just no contest. We went with the sirloin. 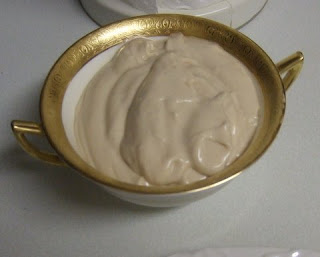 The aioli was originally called Soy Citrus mayonnaise. Now I don’t know about you but putting mayonnaise on a steak is somehow off-putting to me. An aioli simply sounds better. And on the subject of thrift, the Soy Citrus mixture is first used as a marinade for the meat. In the original, once you’d finished marinating, you used two tablespoons of the liquid, then threw the rest away.
To me, this was almost unconscionable. Especially since the greatest marinade on earth doesn’t penetrate but rather flavors the exterior of the meat. So all this liquid, and there’s quite a bit of it, gets tossed. Instead, I decided to boil the entire marinade with its garlic and scallions and distill it down to an essence before nabbing two tablespoons-full. 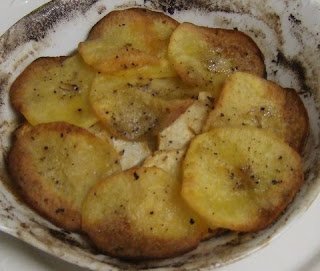 Potatoes Anna are a wonderful crunchy, buttery way to serve potatoes. I’d been to the Famer’s Market that’s held in a tiny park about two blocks from our apartment and there found some wonderful fresh celery root, its leaves still attached so it smelled as fresh as it looked.


Pairing slices of celery root with the Yukon gold potatoes yields an additional flavor and crispness to the dish. I make it in individual gratin dishes but you can also used a cast iron skillet and create a “Potato pie” version that is equally appealing. Here are the recipes:

1. Combine soy sauce, red wine, juices, 2 tablespoons oil, scallions, garlic, white pepper, and cayenne in a 1-quart heavy-duty sealable plastic bag. Add steak and seal bag, pressing out air. Turn bag to coat steak, then marinate, chilled, turning bag occasionally, at least 4 hours.
2. Transfer steak to a plate. Bring steak to room temperature, about 30 minutes. 3. Pour the marinade into 1-quart heavy saucepan. Heat it to a rolling boil and let it diminish by about ½ (10 minutes).
4. To make the aioli, pour two tablespoons of marinade into a small bowl and put into the freezer about 5 minutes until it is completely cooled. In another small bowl, add the marinade the mayonnaise and whisk until it is incorporated.
5. Heat remaining tablespoon oil in a 12-inch heavy skillet over moderately high heat until hot but not smoking, then cook steak, uncovered, until underside is browned, about 5 minutes. Turn steak over, then reduce heat to moderately low and cover skillet.
6. Continue for 10-12 minutes or until thermometer inserted horizontally 2 inches into center of steak registers 120°F. for medium rare.
7. Transfer to a cutting board and let stand at least 15 minutes. Serve at once with aioli on the side. 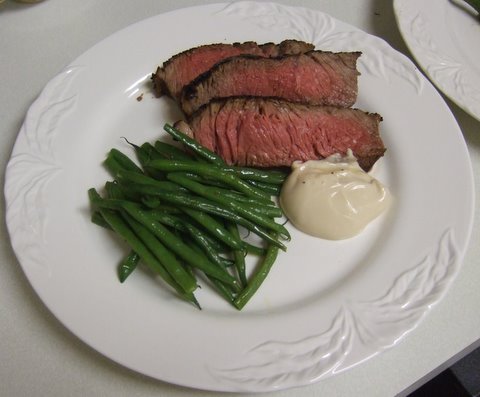 The steak can be marinated up to 24 hours. The aioli is wonderful as a sandwich spread.

This recipe is written for the individual gratin dishes I used to make it. I had can get four alternating layers into each one. If you use a cast iron skillet, you should increase the quantities by at least double. The principle remains the same.

1. Preheat oven to 400 degrees
2. Spray the gratin dishes or cast iron skillet with non-stick spray.
3. Overlap slices of celery root in a circular pattern to form one complete layer. Pour 2 tbsp. melted butter over that layer and salt and pepper to taste. Follow the same procedure, alternating the celery root with the potato and finishing with a layer of potatoes.
4. Cover the entire gratin dish with aluminimum foil. Press down on the aluminum foil to compress the celery root and potato mixture.
5. Cook in the oven for 25 minutes. Remove the aluminum foil and continue cooking 20 minutes or until potatoes are crisp and golden.

Author: Monte Mathews
Filed Under: Uncategorized
A Letter from Hong Kong from Chewing the Fat subscriber, Richard Kligler, and a recipe for Claypot Cooking without the Claypot
Here’s an offer that’s too good to refuse! From Swire Hotels and Cathay Pacific