A visit to The Harrison and a recipe from Executive Chef and Next Iron Chef contestant, Amanda Freitag, for a Fall Squash Salad. And yes we got to meet her. 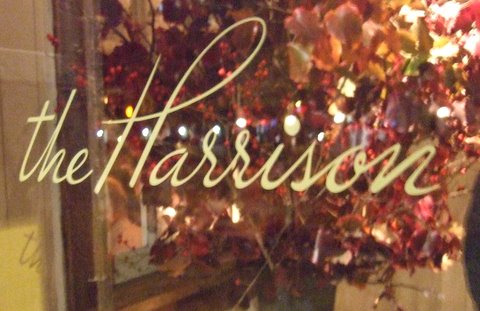 We’ve always had a soft spot for The Harrison, (355 Greenwich St. at Harrison (212) 274-9310 https://www.theharrison.com/ ). The restaurant was set to open the week of 9/11 2001. The World Trade Center stood at the end of Greenwich St. just 6 blocks south. Needless to say, the area was cordoned off and pretty much inaccessible for weeks and weeks afterwards. Fire trucks lined Greenwich St. You needed ID to go anywhere. But The Harrison’s two partners, Jimmy Bradley and Danny Abrams, hung in there and much to the amazement of pretty much everyone opened for business on October 26th, just 6 weeks after the cataclysm.

No question the Harrison benefited from our collective need as New Yorkers to support businesses in the disaster zone and the massive amounts of publicity suggesting we do just that. And then there was the restaurant’s pedigree. Jimmy Bradley, an Englishman, had pulled off a similar coup when he opened Red Cat on the Far West side before the High Line, the Art Galleries, and, to some extent, Chelsea itself were on anyone’s radar. It became a destination restaurant because its food was as friendly as its prices.
From our first visit, very soon after it opened, The Harrison became one of our favorites and we’ve gone there at least twice a year ever since. 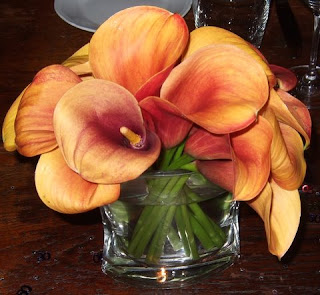 The kitchen has had three executive chefs. The latest is Amanda Freitag who arrived there in January of 2008. The menu has true to its roots. Called an American bistro, it both looks and cooks the part.
Amanda Freitag is one of our favorites to watch on television. We first met her as a judge on “Chopped”, the show where 4 chefs compete in making three dishes, everyone of them an elimination round. In the history of television, I don’t think anyone has ever rendered disdain as well as Ms. Freitag. She shot looks at contestants that I thought would have curdled their blood. When I met her this weekend, she acknowledged the looks but reminded me that one of her most famous came when the chef she was judging had mistaken salt for sugar. This kind of lapse, she assured me, was what was truly responsible for her ‘if looks could kill’. 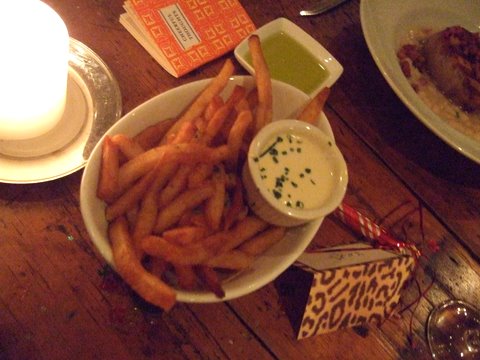 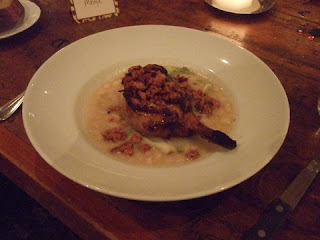 The Harrison is one of those places where I don’t stray far on the menu. I’m not quite sure what would justify not ordering the Duck Fat Fries and the wonderful citrus-y sauce that comes with them. Then there is the matter of the Pork Chop. I confess an abnormal fondness for Pork in general and pork chops in particular. Yet, it’s amazing how many people get them wrong, dry, and tough, de-fatted into oblivion. Not at The Harrison.
Here is a pork chop whose juices flow into the Tuscan beans it lies upon. Topped with minute pieces of guanciale, it is truly a work of art.
I did step outside the box with my appetizer and chose the Fall Squash salad, in part because I’d read the recipe and in part because a Chewing the Fat reader had asked if I’d have any Thanksgiving recipes up. This would certainly qualify as a very grand opener indeed. The recipe follows. First, a few other delights from the menu. 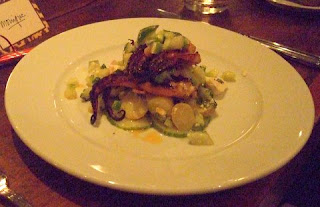 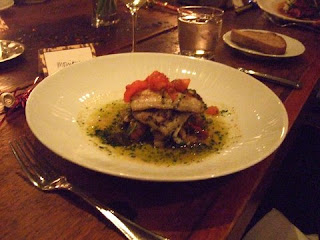 My dinner partner raved about the Charred Grilled Octopus Salad pictured here. It is a wonderful use of octopus, fingerling potatoes, feta and mint. She also loved her Grilled Spanish Mackerel with its ratatouille and chermoula sauce. Chermoula is Moroccan in origin and sometimes referred as a ‘magic’ wand when you cook fish. Classically, it’s a mix of fresh cilantro, garlic, and spices, fresh parsley, fresh mint or chopped onions, bound together with lemon juice and olive oil and made into a thick paste. It looked wonderful and the taste I had was terrific, but when Chef Freitag checked in on us, she indicated that the dish may be off the menu soon because of its seasonality. 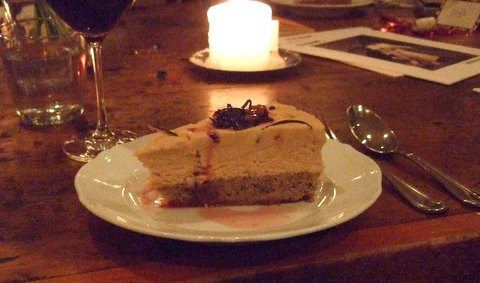 Finally it was time for dessert. The Harrison’s pastry chef is the wonderfully named, Colleen Grapes formerly of Red Cat. She is most well-known for her Milk-Chocolate with Pretzel Crust but that is not currently on The Harrison’s dessert menu.
Instead, we had something even more remarkable. Peanut Butter Mousse atop a banana cake and topped with Concord Grape Jelly. The light as air mousse packs a peanut buttery taste, the coolness of the grape jelly is icing on the cake. The banana cake is not overwhelmingly banana but since peanut butter and bananas are an old favorite, this cake was home run.
We had a wonderful evening at The Harrison. The Pinot Gris flowed and meeting Chef Freitag was a treat. We’d missed “Next Iron Chef” this week where we’d been cheering her on religiously week after week. She was very gracious when we met and didn’t tell us what we found out when we watched the DVR of the episode that she’d flown to Japan to shoot. She didn’t make it into the top three. This is surely because the judges have no idea what she extraordinary performance she gives nightly at The Harrison. 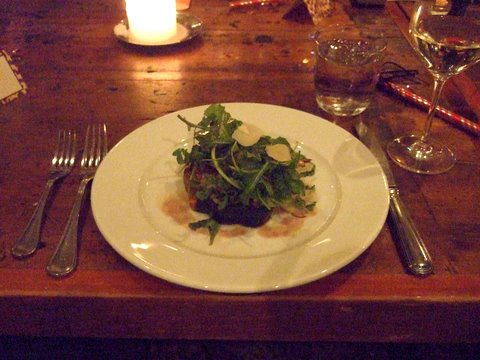 1 thought on “A visit to The Harrison and a recipe from Executive Chef and Next Iron Chef contestant, Amanda Freitag, for a Fall Squash Salad. And yes we got to meet her.”