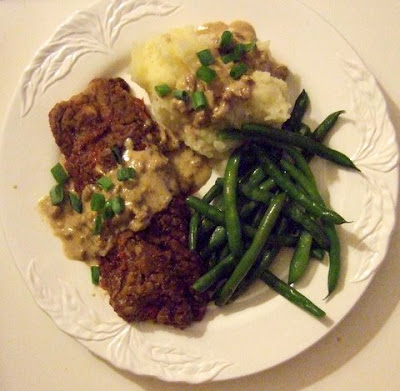 Occasionally, I feel like being bad to the bone and cooking something I really should not eat.  This particular urge came after weeks of eating completely wisely and well but I succumbed to this Bon Appetit recipe because it looked  so darned good.  But before I get to the sinful recipe, I wanted to share some thoughts about healthy eating.  Things that I think allow you an occasional indulgence…like, for instance, chicken fried steak.
To eat healthy, we basically gave up processed foods entirely.  There are extraordinary quantities of sugar hidden in everything from ketchup to crackers. But sugar-free and sugarless aren’t necessarily as good for you as you might like to think.  I have discovered two things I’d like to share with you.  One is that Splenda isn’t really a good alternative to sugar.  In fact, according to Jorge Cruise’s book “The Belly Fat Cure”, Splenda kills half the healthy bacteria in your gut. And I can tell you I’d been having some issues and the day after I quit my Splenda habit, they literally went away.
Jorge makes no case for the other sugar substitutes – Equal and SweetNLow have been shown to poison rats. As Jorge puts it: Do you really want to consume poison everyday—even in low amounts?  But Jorge did introduce me to my Splenda replacement: something I now enjoy and recommend.  It’s Truvia, made from the Stevia plant, a natural sweetener that looks for all the world like granulated sugar and may even be sweeter.  Try it.
So now that I’ve gotten all that goodness off my chest, here’s the recipe for Chicken Fried Flank Steak with Country Gravy.  It is an indulgence but I did try to keep things under control by using Chicken Stock in the mashed potatoes to keep the fat content down and I did serve it with Green Beans. However, not to go all holier-than-thou on you,  I used a slab of Jone’s Pork Sausage roll which no one is ever going to call a health food.  But we honestly enjoyed this dinner.  And this morning, the scale hadn’t budged, I’m happy to say.
Recipe for Chicken-fried Steak with Country Gravy 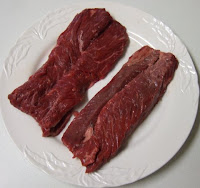 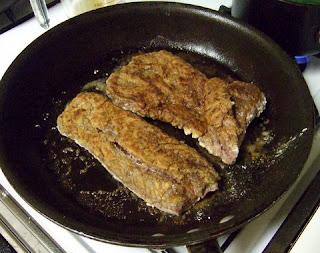