A long ago visit to Shun Lee, and my take on their recipe for Sichuan Shrimp 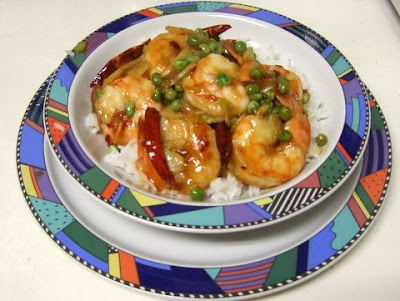 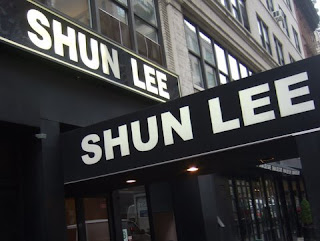 Ten years ago, I got a call from a friend named Ethel, who, at the last minute, couldn’t use her tickets to a big bash given by The Film Society of Lincoln Center.  My work partner, Cathy, and I promptly called our respective spouses to ask them to join us at Shun Lee West (43 West 65th St., Tel: 212-595-8895), then and now one of the city’s top Chinese restaurants.  “What’s the deal?” Andrew wanted to know.  “Well they’re going to show a martial arts film after the dinner” I answered.  I could have gone on to tell him we were going to see “Wo Hu Cang Long” but I am sure I would have gotten the same answer; “Are you kidding? A martial arts movie?” (Our interest in sports of any kind is next to nothing and our interest in martial arts is even lower than that.)  So in answer to Andrew I said  “No and yes…but let’s go to the dinner, get seats right on the aisle at Lincoln Center so we can leave whenever we want.”  Dinner at Shun Lee was worth a few minutes of Kung Foo fighting.  So we went. 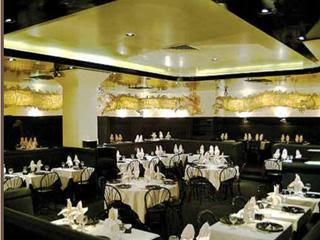 Shun Lee’s interior design is completely over the top.  With its black lacquer and gold dragon décor, it looks like it was flown in from Las Vegas for the night.  It’s quite possibly the darkest restaurant I’ve ever eaten in. One visit I remember literally bumping into Woody Allen in the dark. Stumbling back to the table, I had to be told by my dinner companions who he was.  But the food at Shun Lee is simply excellent.  Along with Mr. Chow in Los Angeles and in New York, it elevates Chinese cuisine and pretty well ruins Chinese food forever from anywhere else outside of Hong Kong.  Since we lived in the delivery area, it became our take-out place despite prices that made it quite an extravagance.
The Film Society Event was quite something.  The director of the movie was, not surprisingly, Chinese.  I didn’t recognize his name or anyone in his retinue of beautiful Asian film stars.  They all paraded through Shun Lee to applause while we ate a delicious menu of wonderful food.  Then, we all got up, walked across the street and took our seats in the theater. The lights went down, the curtain came up, the movie began.  We were riveted to our seats for the next two plus hours, astonished at what we saw. We were mesmerized by the scenery, the special effects, the astonishing performances—everything.   At the end, the entire audience rose to its feet in one colossal standing O.  We had just seen the world premiere of “Wo Hu Cang Long”.  But you may know it by another name: “Crouching Tiger, Hidden Dragon”.  Oh, and the director was a man named Ang Lee. He went on to direct a couple of other movies we liked, most particularly, “Brokeback Mountain”.
The owner of Shun Lee West, Michael Tong, opened the original Shun Lee Palace on the East Side in 1971.  He is a great exponent of Chinese cuisine.  So of course when he published his Shun Lee cookbook, I was quick to buy it.  We have a wok out at the beach, and the utensils for it.  But in our city apartment, we don’t.  But I’ve found that a large skillet, in either non-stick or conventional finishes, works just fine for stir-frying which is basically what this recipe calls for.    I am also not true to Mr. Tong’s original because for the life of me I could not find anything remotely resembling a  “Tree Ear”.  Mr. Tong describes Tree Ears as ‘a fungus grown in China’.  Now I don’t know about you, but I didn’t necessarily think the idea of adding a fungus to something you were going to eat, was particularly appealing. So I skipped those.  What we ended up with was a wonderfully spicy, rich sauce, with some easy-to-find bamboo shoots and, for crunch, lots of scallions. I topped the dish off with a cup of frozen peas that I ran under hot water before tossing them in the pot at the last minute.   I used the 11-15 count Costco Shrimp.  I think I could have gotten away with 4 per person but I made six.  And as Andrew pointed out, we finished them all off.  Here’s the recipe:
Recipe for Sichuan Shrimp
12 Jumbo Shrimp peeled and deveined
¾ cup plus 1 tsp. Cornstarch
Salt
1 Cup Frozen Baby Peas
For the Sauce: 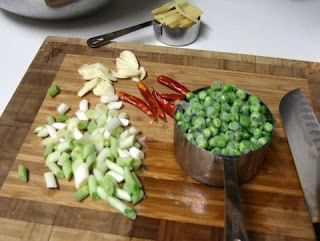 2 ½ tbsp.sugar
2 tbsp. distilled white vinegar
2 tbsp rice wine or  dry sherry
2 tbsp. Soy sauce
2 tsp. chili garlic sauce
1 tsp. cornstarch
Vegetable oil
1/3 cup sliced canned bamboo shoots
8 scallions, white part only, trimmed and sliced diagonally into ¼ inch pieces
10 dried red peppers
5 cloves of garlic, peeled and sliced 1/8 inch thick.
1 tsp. dark sesame oil
1.  1.  Combine the shrimp, the 1 tsp. cornstarch, and a pinch of salt in a medium bowl.  Mix well, then rinse the shrimp under cold running water.  Drain and pat them dry with paper towels.  Mix the remaining ¾ cup cornstarch with a pinch of salt in a medium bowl. Dip the shrimp, one at a time, into the cornstarch, coating them thoroughly. Place the shrimp on a platter, cover with plastic wrap, and refrigerate for 30 minutes.
2.  2. Meanwhile, to begin the sauce, mix the sugar, vinegar, rice wine, soy sauce and chili garlic sauce in a small bowl.  Dissolve the cornstarch in 2 tbsp. cold water in another small bowl.  Set both bowls aside. 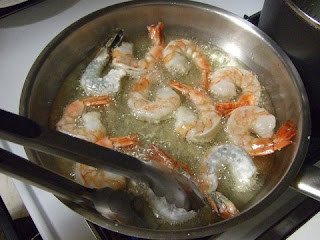 3.  3. Heat a large non-stick skillet or wok over high heat.  Add enough oil to come about 1 inch up the sides of the pan and heat it to 325 degrees.  Add the shrimp on at a time, taking care that they do not stick together, and stir gently until they turn pink, about 4 seconds.  Add the bamboo shoots the last 10 seconds.  Using a wide wire-mesh strainer or slotted spoon, transfer the shrimp and bamboo shoots to a colander to drain.  Discard all but 2 tbsp. of the oil from the pan. 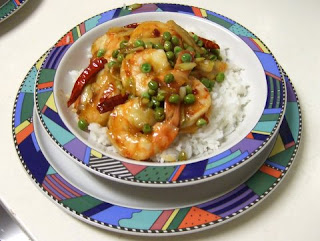 4.  4. Return the pan to high heat.  Add the scallions, dried red peppers and garlic and stir fry for 15 seconds.  Return the shrimp and bamboo shoots to the pan, add the peas and then add the soy sauce mixture.  Add the cornstarch mixture and stir fry until the sauce thickens, about 20 seconds.  Add the sesame oil at the last second.  Serve immediately over Basmati or Jasmine rice.

2 thoughts on “A long ago visit to Shun Lee, and my take on their recipe for Sichuan Shrimp”