Sweet Corn Gelato and a simply delicious way to serve it. The two most anticipated vegetables of the summer on the East End have arrived:  Our sweet corn and the ripest, reddest tomatoes of the year!  It’s hard to know which is the most welcome but I found a very different way to enjoy them both in a wonderful appetizer.  I realize I am asking you to think outside the box but once you’ve tasted this incredibly delicious combination, it will not seem all that strange to you.  I pared a rich, creamy and supremely corn-tasting gelato with the peak of the summer’s tomatoes and the result doubles the pleasure of these two seasonal favorites.
I first read the recipe for Sweet Corn Gelato in a recent Bon Appetit.  It was one of those ‘request’ recipes where someone falls in love with a restaurant offering and BA manages to coax the recipe out of the chef.  In this case, the gelato had been a dessert course at Otto (1 Fifth Avenue, entrance on 8th St. New York NY Tel: 212-995-9559), Mario Batali’s  downtown Pizza emporium.  This Greenwich Village location has long been a favorite of mine.  I go back—way back—to when it was One Fifth Avenue, a restaurant that had a decidedly Deco feel to it—down to the chairs which the owners had purchased, from the former Cunard liner “Caronia”.  I felt right at home in them as I too had bought them right off the ship when it was laid up in Chelsea.  It was the only ship in history to get a New York City parking ticket for non-payment of its port fees.  But I digress.
Otto is supposedly modeled after an Italian railroad station.  I don’t get the connection at all but it hardly matters because it’s a great place for a pizza, a glass or two of wine, a really nice cheese platter and some extraordinary gelato flavors, like Sweet Corn.
Of course it was served as a dessert course.  And initially I thought that would be how I would use it.  But when it came time and I tasted this delicious ice cream, I realized it was a great starter.  It tastes like the essence of corn and the wonderful sweetness is a perfect counterpoint to the acidity of a great ripe tomato.
Before getting to the recipe, I wanted to share a piece of information about corn that came as quite a surprise to me.  I knew that the best corn was fresh-picked and cooked on the same day.  What I didn’t know was that you should keep corn, unhusked, in the coldest part of your refrigerator and then husk it just before you cook it.  Corn starts turning sugar into starch the moment it is picked.  The sweetest corn is corn that has the least starch. We are incredibly fortunate in that Country Garden, the farm stand we shop at most often, harvests their corn every morning and, if there’s any unsold at the end of the day, it goes into the feed bin.  It is never sold on its second day.  How’s that for fresh? Now back to our gelato.
Making Ice Cream is really quite simple. And if you have children in the house, it’s a great activity to share with them.  It does require a great deal of patience on their part as there are a number of hours of cooling and freezing.  But the results thrill them and guarantee a memory no store-bought ice cream can buy. The flavors you can achieve are astonishing.  A great book on the subject is David Lebovitz’  “The Perfect Scoop” (10 Speed Press, 2007).  But you hardly need to buy it to make Sweet Corn Gelato
However, you do need to have an ice cream maker. If you don’t have one, please get yourself a Cuisinart Ice Cream maker.  They are an integral part of our summer.  There’s a ‘bowl’ which you keep in the freezer and haul out at the last minute. Turn the machine on and then in a final act of patience, you have to put the finished stuff in the freezer for an hour until it hardens up a bit. Here’s the recipe:
Recipe for Sweet Corn Gelato adapted from Mario Batali’s Otto Restaurant in NYC 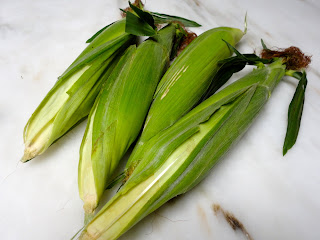 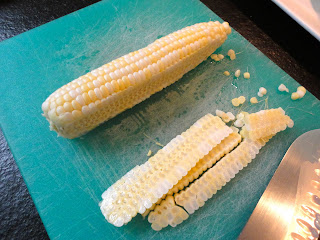 1.   Cut kernels from corn cobs. This is easily accomplished by putting the ear of corn flat on a cutting board and cutting the corn off in one straight line.  The cut side then become the “bottom” as you remove the rest of the kernels.   Reserve the cobs and break each one into 2-3 pieces. 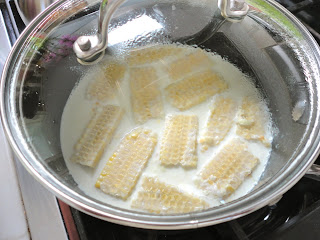 2.   Bring milk to a simmer in a large saucepan. Add corn kernels and cobs. Remove mixture from heat, cover, and let steep for 45 minutes. 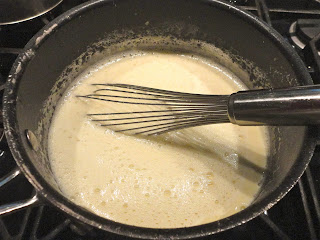 3.   Remove cobs from milk; discard. Purée mixture in batches in a blender. Set a coarse strainer over a large bowl. Strain mixture, pressing on solids; discard solids. Add more milk if needed to measure 3 1/2 cups.
4.   Bring corn mixture, 1 1/4 cups sugar, and cream to a simmer in a large saucepan over medium heat, stirring to dissolve sugar.
5.   Set a strainer over a medium bowl; set aside. Whisk remaining 1/4 cup sugar, egg yolks, and salt in a medium heat proof bowl. Gradually whisk in hot milk mixture; return to saucepan. Stir constantly over medium heat until custard registers 175° on an instant-read thermometer, about 2 minutes.
6.   Immediately pour custard through strainer. Place bowl with custard over a large bowl of ice water. Let stand until cold, stirring occasionally, about 5 minutes. Cover and refrigerate custard for at least 6 hours or, preferably, overnight. 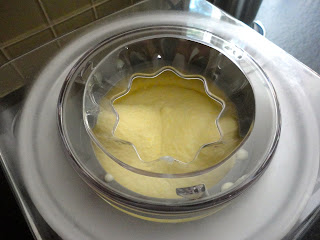 7.   Process custard in an ice cream maker according to manufacturer’s instructions. Transfer to a container; freeze for at least 1 hour and up to 1 day. 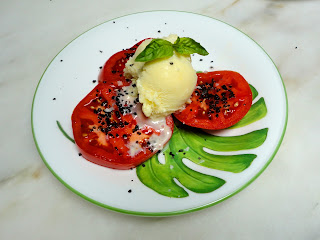 8.   Make the Appetizer.  Slice the tomatoes and fan the piece out on the plate.  Take one medium scoop of Sweet Corn Gelato and center it on the sliced tomatoes.  Sprinkle sea salt over both tomatoes and gelato.  I use white sea salt on the gelato and black salt on the tomatoes.  Garnish with a sprig of basil and serve at once.
Author: Monte Mathews
Filed Under: Appetizers, David Lebovitz, Mario Batali, Perfect Scoop, Sweet Corn, Sweet Corn Gelato, Tomatoes
Roasted Asparagus with Lardons and Fried Egg Adapted from Almond Restaurant in Bridgehampton NY
Orange and Olive Oil Cake

3 thoughts on “Sweet Corn Gelato and a simply delicious way to serve it.”