The Hampton Classic 2011. What we loved, what they wore and what we ate.

The Grand Prix marks the end of The Hampton Classic Horse Show, one of the pre-eminent equestrian events in the country.  It also means the end of our summer season.  Thanks to our very great friends, Jim Osburn and Michael Grim, we’ve gone to the show year after year.  It’s a wonderful afternoon of star gazing, Rose drinking, beautiful table settings and incomparable horsemanship–although the horses always seem to take a back seat to the extra-ordinary people watching.  This year was no exception.  And this year, Andrew and I were charged with providing the lunch.  It was a big success!  Michael provided Devilled Eggs which, as only he could, matched the table décor flawlessly.  We did a wonderful Summer Corn and Scallop Salad and Andrew went all out with two cookies and an incredibly delicious Peanut Butter and Jelly bar.  While the 8 guests at our table enjoyed the salad, the cookies reached a wider audience:  The VIP tents are a virtual catwalk of people who walk through greeting their friends and, in our case, snagging one of Andrew’s cookies. 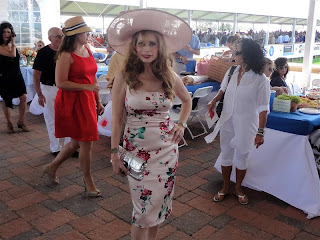 The highlight of all our star-gazing was not Mayor Michael Bloomberg or any one of the Pretty Young Things but none other than Ignacio Figueras, ranked as one of the top 100 Polo Players in the world.  In fact, he’s sometimes called the David Beckham of Polo.  But you may know him as “Nacho” Figueras, the Face (and body) of Ralph Lauren’s Black Label.  “Nacho” stopped by for a photo op with one of our tablemates, Paige Nagle.  As you can see, Paige was all smiles and shot the pictures off on her I-Phone.  It was all in fun  which is what the whole thing is all about.  And hometown pride won out: The winner of the Grand Prix was Ward McLain, a Southampton native who won for the third year in a row!
Now about the food.  Andrew’s cookie recipes will appear later this week.  For right now, I want to share our Summer Corn and Scallop Salad with you.  I turned to Sylvia Lehrer’s  “Savoring the Hamptons: Discovering the Food and Wine of Long Island’s East End” (Running Press: 2011).  I just featured this wonderful cookbook last week but this recipe is well-worth savoring and even if Labor Day has come and gone, this would make a wonderful September luncheon dish over the next couple of weeks.  It uses our great sweet summer corn, pairs it with arugula, tiny grape tomatoes and some beautiful sea or divers scallops that are quickly cooked in brown butter.  We were able to assemble it all at our table which was quite a feat!  We dressed the arugula, mounded the corn in the center of the plate, surrounded it with tomatoes, topped it with our scallops and garnished it with our own chives.  It was absolutely delicious.  The scallops were tender, the corn sweet and the dressing just saucy enough to give the arugula and corn a little kick.  Here is the recipe:
Recipe for Summer Corn and Scallop Salad adapted from Sylvia Lehrer:
For the vinaigrette: 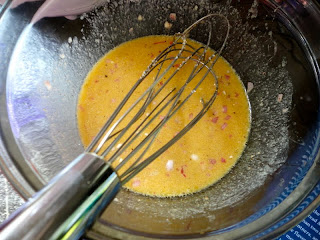 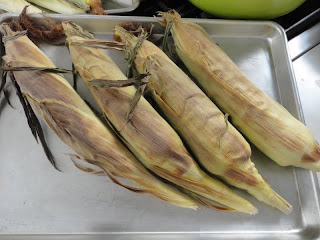 Cook the corn in its husks in a 350 degree oven for 30 minutes. When it is cool enough to touch, husk the corn. Cut the kernels from the cobs into a mixing bowl. Add the scallions and about 3 tablespoons of the vinaigrette; toss to mix. The salad up to this point can be prepared up to a couple of hours ahead. 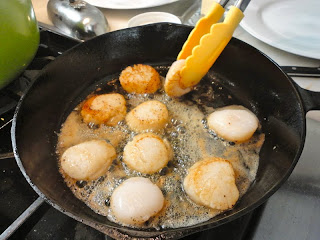 Rinse the scallops. Pat them dry with a paper towel and season with salt and pepper to taste. Melt the butter with the oil in a skillet, preferably cast iron, over medium-high heat until hot and the butter is a light golden brown. Working in batches, put the scallops into the hot pan and cook, basting with the foaming butter, for about 1 ½ minutes on each side, until a golden crust is formed. Transfer to a warm platter. 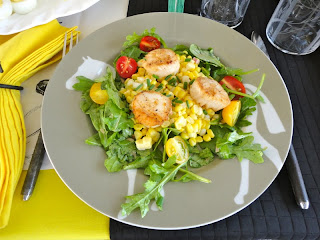 To serve, toss the arugula with about 1 ½ tablespoons dressing and place on a serving platter or divide equally among six individual salad plates. Spoon the corn and scallion mixture over the arugula and artfully arrange the scallops and tomato halves around the platter or plates. Drizzle the remaining dressing over the scallops and tomatoes. Garnish the platter or plates with chives and serve at room temp.
Serves 8.  You can vary the amounts easily making this for 4 by halving the recipe or for 6 by cutting everything down by a third.
Author: Monte Mathews
Filed Under: Hampton Classic, Hamptons Food, Jim Osburn, Joy Marks, Michael Grim, Seafood, Summer Corn and Scallop Salad, Sylvia Lehrer
Kat McCleland’s Unbelievably Delicious Almond Cake With Marscapone Whipped Cream
The Ultimate Hampton Classic Cookies

3 thoughts on “The Hampton Classic 2011. What we loved, what they wore and what we ate.”