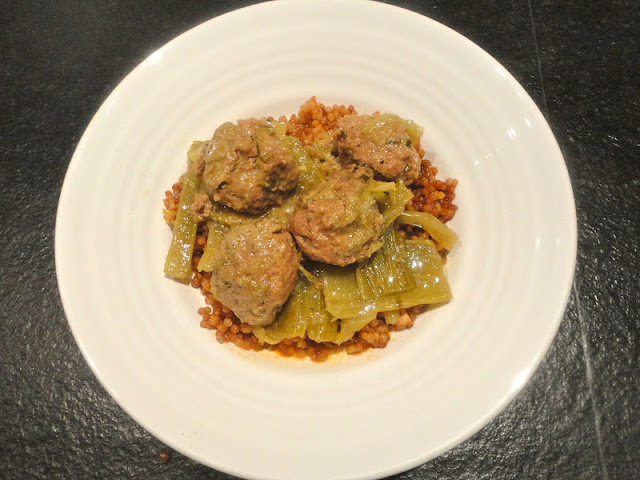 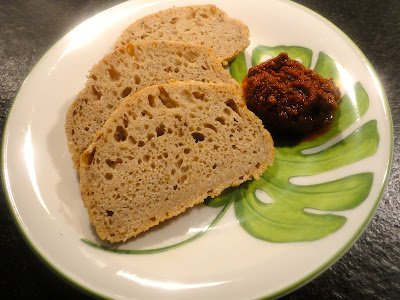 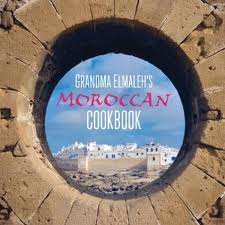 If you love food stories, this is a wonderful one.  It starts with Lisa Elmaleh Craig’s new book “Grandma Elmaleh’s Moroccan Cookbook” (Hesperus Press Ltd., London 2012).   The book takes us on one family’s journey through the ages until they came at last to the United States in 1939.  Like so many other Jewish families, the Elmaleh clan sought refuge here just before the outbreak of World War II.  Unlike many refugees, the Elmalehs were prosperous merchants who were soon living in a large house in Cedarhurst, Long Island.  There, Sarah Levy Elmaleh became renowned for her cuisine to the point where Craig Claiborne, the esteemed editor of the New York Times food section, hailed her with a headline any cook would envy: “Moroccan cooking that a sultan would envy”.

The Elmaleh’s hailed from the southern Moroccan coastal town of Mogador, now called Essaouira.  This ancient Portuguese fortress had been a melting pot of civilizations living side by side in a peace we could only hope for today.  Englishmen and Europeans, native Berbers and Arabs of many tribes lived in harmony with Sephardic Jews like the Elmaleh’s.  The Elmaleh’s themselves were partially Sephardic and partially Eastern European.  When the Inquistion forced the Jews out of the Spanish peninsula, they dispersed all over Europe.  The family name was translated into whatever language their adopted country spoke.  And so “El Maleh” became “Goodman” in English, “BonneHomme” in French, and “Tovim” in Israel.  And those of the family who travelled via Gibraltar into North Africa took the Arab name “Elmaleh” which literally means “The Good”.

Since Sarah Levy grew up in affluence, her family kitchen was presided over by Arab servants.  They’d shoo her out of the kitchen often.  However, Sarah had a terrific curiosity about all things culinary plus a remarkable memory.  In her own kitchen she remembered their techniques and could recreate their recipes, many of which she improved upon mightily.  She never used a cookbook in her entire life. Lisa Elmaleh Craig notes that irony in her new cookbook.  The oral tradition of passing down one’s recipes was very much alive in the Elmaleh household.  Lisa sat at her grandmother’s kitchen table while the two women cooked, tasted, measured and transcribed the older woman’s prized recipes.

It is interesting to note that every single recipe in Grandma Elmaleh’s repertoire is, by default, completely kosher; Whatever was European was prepared according to Jewish dietary laws.  But it’s well to remember that Arab or Muslim dietary laws are very similar.  Both eschew the use of alcohol either as a beverage or in cooking.  Both forbid the eating of pork, ham, bacon or any by-products.  The key difference is that Arabs may cook their meats in butter instead of oil whereas kosher cooking must separate meat and dairy.  Instead, Grandma’s recipes use vegetable oil, which makes them healthier for everyone.
Now if you are wondering how I came to know this fascinating family history and the delicious content’s of Ms. Craig’s cookbook, it’s wise to point out what a small world New York represents.  Six degrees of separation was invented here.  In this case there are only two.  And that’s where Uncle Earl comes in. 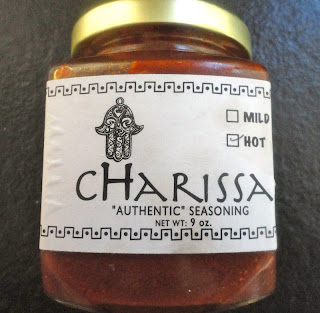 Monte’s Ham Original Glaze is made at a place called “North Fork Kitchens”.  Under the amazing direction of Jeri Woodhouse, this kitchen is a hub of local food activity.  And it was there that I was introduced to Earl Fultz, who is Lisa Craig’s uncle by marriage.  It seems Earl had decided to go into business making two of his late mother-in-law’s recipes.  He now makes Charissa, a condiment that combines Harissa, the traditional Moroccan hot pepper sauce, with the spicy cumin-and-garlic Chermoula sauce his mother-n-law used extensively when cooking fish.  Together this remarkable sauce has an amazing versatility.  You can use it on meat, poultry, fish, eggs, vegetables.  You can spread in chips or pita bread.  Or you can make your own Moroccan “Quick Bread” which is Earl’s second gift to the kitchen. 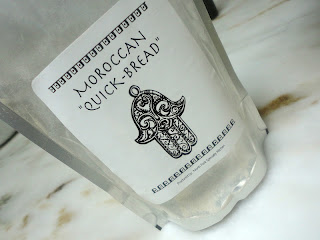 Now Earl lives in Peconic Landing, a retirement community on the North Fork where our dear friend Huey moved not too long ago.  And it seems that not only did Huey know Earl, but Huey’s mother was dear friends with Sarah Elmaleh!  Huey’s memories of her included the fact that the woman never had fewer than 25 places at her dinner table.  Huey has a remarkable food memory and, when he presented an autographed copy of Lisa’s book to me, he waxed poetic over the recipe for “Melt in Your Mouth Meatballs with Celery”.  So that, of course that was the first thing I made. 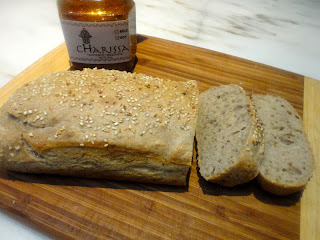 I must confess that I was surprised at how very delicate the taste of the dish was.  I fully expected some full-on Moroccan flavors such as you’ll find in the other Moroccan meatball dishes I’ve made and reported about here.  Instead, these super-tender meatballs, while light as air, were also strangely bland.  And let’s face it, celery is not exactly a flavor powerhouse.   But I made the dish for Huey and when I gave it to him, I suggested using Earl’s Charissa in some fashion to boost the flavor.  Well, that was the ticket.  I went home and made an extraordinary dish of Israeli couscous flavored with finely chopped scallions and a hefty tablespoon of Charissa per serving.  Bingo!  The dish now had wings and I couldn’t have been happier with it.   I also baked half of the Quick Bread, leaving the rest in the refrigerator for later use.  It was a revelation as well.  It’s simple yeast dough has cumin seeds, whole wheat and white flour and it’s topped with sesame seeds that come with the kit containing the yeast.  It was wonderful dipped into the Charissa but I’ve begun to believe anything you dip into Charissa will knock your socks off. For ordering information, go to the bottom of this post.  Here are the recipes: 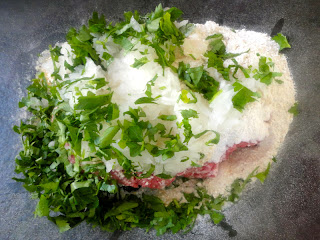 Put the meat in a large bowl with the grated onion, parsley, egg and matzo meal.  Blend well with your hands and then add the tomato juice, cinnamon, nutmeg and coarse salt to taste. Knead well. Add 1 tbsp. oil and knead again, until the mixture becomes a smooth paste. 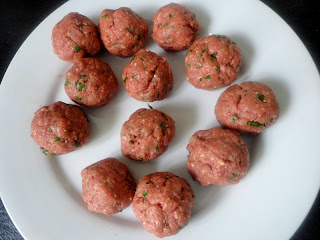 Shape into meatballs 1 ½ inches in diameter and set aside for about 15 minutes. 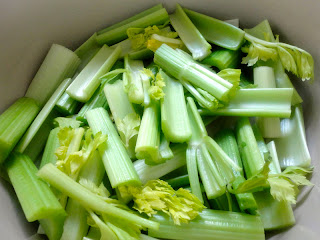 Cut the celery into 3 inch long pieces. Place in a dutch oven with water to cover.  Add 2 tbsps. Oil, coarse salt to taste, the turmeric and the garlic.  Bring all the a boil, uncovered, until the celery is tender.

Gently add the meatballs to the pot one by one, integrating them into the celery.  Partially cover the pot and simmer the meatballs for 2 to 3 hours, or until they are tender and the sauce has reduced to  about 1 cup.  Serve over couscous recipe that follows.
Recipe for Israeli Couscous with Scallions and Charissa:.
1 package of Israeli (Pearl) Couscous
1 bunch of scallions, white and green parts cut into ¼ inch pieces
6 tbsp. Charissa
Olive Oil 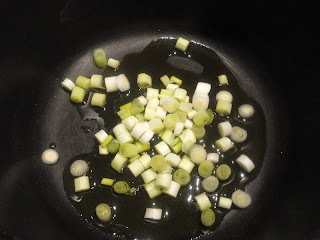 Saute the scallions in olive oil until lightly browne
Add one box (8.8 oz) to the scallions.  Add enough boiling hot water to cover by ¼ inch.  Cover pot and simmer 8-10 minutes. 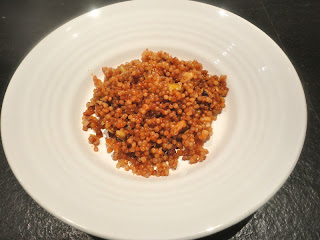 Stir in Charissa and add salt to taste.  Put couscous in bowls and top with Meatballs.