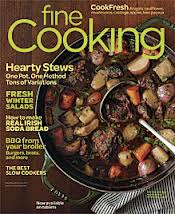 Beef prices have escalated this year to the point where a perfectly ordinary New York Strip is 15.99 a lb.  Filet Mignon? 29.99. Last week, I even noted that our favorite neighborhood bistro’s Steak Frites has diminished in size and risen $4.00 in price.  So when Fine Cooking’s February/ March issue arrived, I was excited to see a recipe for Steak Diane that used the humble flank steak. It just so happens that flank steak is on special this week at Fresh Direct for 5.99 a lb.  Now I have a special connection to Steak Diane.  It goes way back to my first visit to New York.  Bear with me and I’ll get to that story in its entirety. First, Fine Cooking’s budget friendly recipe.
When you think about it, filet mignon is a very subtle piece of beef.  Tender to the point where a baby could probably chew it, in order to become Steak Diane, it has to stand up to a lot.  The sauce is made with Worcestershire, Brandy, lemon juice and heavy cream along with mustard and thyme, shallots and parsley and chives.  The beefier flank steak meets its match with these ingredients.  And the Fine Cooking recipe actually goes further than the original with its addition of Sherry as well as the Cognac or Brandy.  But unlike the original, there’s no flambeeing here so some of the theater is lost.  But you won’t miss it.  This is a wonderful way to have beef in the middle of the week as the whole recipe comes together in under a half hour!  The sauce makes the meal.  We served this with a simple baked potato and some green beans with slivered almonds.  I am afraid my photos of the finished plate have nothing on the single-minded shot from Fine Cooking, which is what you see at the head of this post.  Thank you Fine Cooking for another “Make It Tonight” article that’s exactly as advertised.  Here’s the recipe and at its end the story of my introduction to the original Steak Diane and the city I’ve now called home my entire adult life.
Recipe for Flank Steak Diane courtesy of Fine Cooking Magazine 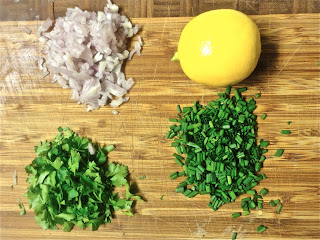 1 1-1/2-lb. flank steak
Kosher salt and freshly ground black pepper
2 tsp. peanut or vegetable oil
3 Tbs. finely chopped shallot
3 Tbs. medium sherry, such as amontillado
2 Tbs. Cognac
2 tsp. Worcestershire sauce
2 Tbs. lower-salt chicken broth
2 oz. (4 Tbs.) cold unsalted butter, cut into 4 pieces
3 Tbs. thinly sliced fresh chives
2 Tbs. finely chopped flat-leaf parsley
1/2 tsp. fresh lemon juice, more to taste
Position a rack in the center of the oven and heat the oven to 400°F.
Pat the steak dry and season generously with salt and pepper. In an ovenproof heavy-duty 12-inch skillet (preferably cast iron), heat the oil over high heat until shimmering hot, about 2 minutes. Brown the steak on both sides, about 4 minutes total. Transfer the skillet to the oven and continue to cook until an instant-read thermometer inserted in the thickest part of the meat reads 135°F, about 5 minutes. Transfer the steak to a platter, cover loosely with foil, and let rest for 5 to 10 minutes. 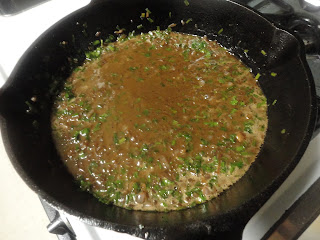 Meanwhile, pour off the fat in the skillet (be careful of the hot handle). Set the skillet over medium heat, add the shallot, sherry, Cognac, and Worcestershire sauce. Simmer, stirring and scraping the bottom of the pan with a wooden spatula to release any browned bits, until the sauce is reduced by half, 2 to 3 minutes. Lower the heat to low, add the chicken broth, butter, chives, and parsley and whisk, swirling the pan occasionally, to emulsify the butter; the sauce should look creamy. Remove from the heat, whisk in the lemon juice and season to taste with salt, pepper, and more lemon juice. 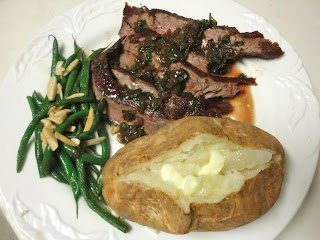 Cut the steak in half with the grain, then slice the meat on the diagonal across the grain into 1/8-inch slices. Serve with the sauce.
Now for my Steak Diane story: 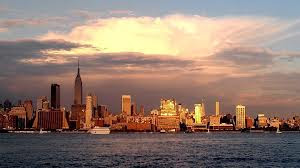 The first time I ever laid eyes on Manhattan, I was smitten. We’d driven down from Canada.  There, on the other side of the George Washington Bridge, I first saw it.  Manhattan. All the way down the West Side Highway, I gawked. And in row after row of tall buildings lining Riverside Drive, every window was 24 carat gold.  I mean it!  The sun wasn’t even that low in the sky but every reflective surface was solid gold. I leaned way back in the back seat of the car and looked up.  I knew I was in heaven.
Thus prepared for the celestial, it came as no surprise that my first meal in New York lived up to my every expectation.   My mother and father never traveled without first mapping out every meal, every restaurant.  From the earliest cup of coffee, through long lunches, to afternoon tea, to cocktails (several), to dinner and beyond, everything was laid out and planned.  It was not unheard of to eat in or visit the bars of seven or eight establishments a day.  Not on this trip, anyway. 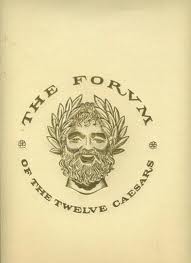 That very first night, we went to The Forum of the Twelve Caesars.  Now I cannot pretend to remember the restaurant in any great detail.  I’ve since read that in restaurant history, the Forum occupies the dubious distinction of being the first ‘theme restaurant’, the precursor of every Hard Rock Café.  Portraits of all of the Caesars presided over a room staffed by waiters dressed in toga-like outfits. They, in turn, presided over wine coolers shaped like centurion’s helmets.  Apparently, in the category of restaurant decor excesses, the Forum exceeded all expectations.   I remember none of this.   What I remember is my Steak Diane.
Now Steak Diane was  restaurant  theater of  long-standing.  While not quite as common as tableside Caesar Salad, it was right up there with Crepes Suzettes in terms of sheer drama.
A table was rolled to our table.  All the ingredients were lined up on top.  The butter and the chives sat measured in little dishes, while the cognac and the sherry sloshed about in decanters.  While the butter sizzled over the gas burner, the steak was proudly displayed.  With great panache, the meat was flung into the copper skillet, crackling and hissing as it cooked.  It couldn’t have been two minutes before the cognac was doused over the meat.  And then it happened.  Gold flames leapt to the ceiling, startling diners on all sides.  A quick learner, I knew that this was another New York moment and like the gold windows I’d seen coming into town, one that required my looking up.  I would swear that the fire had singed the acoustic-tiled ceiling.  Is it possible the Forum had acoustic tile?  Nevertheless, you get the picture.  I was thrilled.
My father was an incredibly contained person.  Elegant, impeccably groomed, there was a calm about him equivalent to that in the eye of a hurricane.  Nothing rattled him.  My mother was far more enthusiastic in general.  My father sat serenely through this performance.  My mother shared my excitement.  My Steak Diane was delicious.
The rest of that trip to New York was amazing.  The Four Seasons, Peacock Alley, Joe Allen’s.  Barbetta, “21” and Sardi’s.  Schraft’s for ice cream.  The Charleston Garden for tea.  I never saw the Statue of Liberty or the Empire State Building.  Well, that’s not entirely true.  I did see them both in the distance from a table at the Tower Suite at 666 Fifth Avenue.  But nothing I saw or ate or experienced came close to my Steak Diane.
You can imagine my extreme delight when, on our last full day in town, my father asked me where I’d really like to go for our final dinner.  It was Saturday.  I know that all kinds of favors had to be hauled in by the hotel concierge.  And I know that we were stuck with a very early reservation that severely cut into the cocktail hour and didn’t please my parents at all.  But back we went to the Forum.  Ensconced on a familiar banquette, I did the inevitable.
The rolling table arrived on cue, the butter and chives lined up, the cognac and sherry at the ready.  The sizzle, the crackling, the hissing were all there. But, at the exact moment when the time I had waited for came…nothing.  Oh yes the cognac flamed blue. But the flame itself was so puny, I could not hide my disappointment.   And I couldn’t let the moment pass without comment.  “Last time, it went to the ceiling,” I said with undisguised disdain for this captain.   To which he boomed, “It did! Total incompetence!  Point out the fool who did that. He should be fired!”  I kept my mouth shut. The man was my hero after all.
The next day we left for home.  I knew I was coming back.  I had a weakness for gold windows and incompetence.   They could be so spectacular.
Author: Monte Mathews
Filed Under: Beef Dishes, Classic Recipes, Fine Cooking, Flank Steak, Flank Steak Diane, How I feel in love with New York, New York City, New York City Restaurant History, Steak, Steak Diane, The Forum of the 12 Caesars NYC
Burgundy Beef Stew adapted from Saveur’s "New Comfort Food"
Brussels Sprouts and Steak Stir Fry from Bon Appetit