Shrimp Scampi, an amazingly fast Italian American Classic and the story of the Feast of the 7 Fishes. I first wrote this post a year ago. But I thought I would repeat it again this year because it’s a wonderful explanation of an Italian tradition that many Italian Americans will uphold again this Christmas Season. And the recipe follows my mantra for the season: Get
something on the dinner table in no time and impress one all with a wonderful dish for all to savor. I had some 20-25 count Shrimp and started poking around for a recipe that had not appeared on Chewing the Fat.  Since there have been no less that 41 shrimp recipes published here, it amazed me to discover that the Italian American restaurant classic, Shrimp Scampi, had never made an appearance here.  How clearly I remember Scampi from my first forays into an Italian restaurant in Montreal.  The overtly garlic-y, buttery sauce was a sensation—especially if you teamed it up with crusty bread to soak up the sauce.  Later, when I went to school in Italy and learned the language, I was surprised to hear that ‘Shrimp Scampi’ is rather like calling something Chicken Poulet.  Scampiis the ingredient “langoustines” — an Italian version of shrimp.  But this dish itself is pure Italian American cooking, plain and simple and incredibly easy to make.  I was astonished that the whole thing took under ten minutes to make. In fact, it’s so speedy, you feel like a one-armed paper hanger juggling the cooking of the shrimp, with the 3 minutes it takes the angel hair pasta to cook.  But this is a winner from start to finish and before the feasting begins tomorrow, it’s a perfect thing to serve the night before the night before Christmas.  Except, perhaps, if you’re Italian, because your Christmas Eve Feast will satisfy your hunger for seafood for quite a while.   I’ll take you through the Scampi recipe after introducing you to The Feast of the 7 Fishes.

On Christmas Eve, Italian American families will celebrate the arrival of Christmas with seafood.  Its components allow for a huge choice depending on taste and budget.  Here’s a list of what can be included: Baccala (salt cod) with pasta, as a salad or fried, Baked Cod, Cod fish balls in tomato sauce, Deep Fried Cod, Deep Fried Fish or Shrimp, Deep Fried Scallops, Mahi Mahi (baked or fried), Fried Smelts, Seafood Salad, Linguine with anchovy, clam, lobster, tuna or crab sauce, Marinated or fried eel, Octopus Salad, Oyster Shooters, Scungilli salad, stuffed calamari in tomato sauce, Stuffed Baked Lobsters, Stuffed Baked Quahogs, and Whiting.  Small wonder 7 is often the minimum number of dishes on the groaning board.   There’s a long tradition of eating seafood on Christmas Eve.  It’s part of the Roman Catholic tradition of abstinence – refraining from eating meat or milk products on Fridays and on the eve of specific holy days, like Christmas itself.

Why the number seven?  7 is the most repeated number in the Bible. It appears over 700 times.  Then there’s the 7th Day on which God completed making the world and rested.  There are 7 Sacraments in the Roman Catholic Church.   There are 7 hills in Rome.  And 7 represents perfection: The traditional number for divinity is 3 and for the Earth, it’s 4.  Added up to seven, the number represents God on Earth or Jesus Christ.  (Fans of The Sopranos TV show may remember Carmela Soprano (Edie Falco) discussing Janice Soprano’s (Aida Turturo) insistence on cooking Christmas dinner and telling everyone within earshot that she, Carmela, would cook Christmas Eve dinner because “we can’t turn Janice loose on shellfish”. ) Too bad Janice didn’t just make Shrimp Scampi.  I promise you, there’s not much easier to cook than this.  Here’s the recipe:
Recipe for Shrimp Scampi
Serves 4. Can easily be halved.  Active time 10 minutes. Total Time 20 minutes. 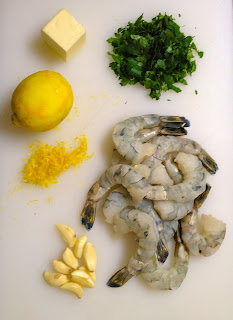 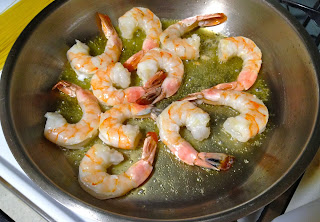 2.
Meanwhile, heat oil in a 12-inch heavy skillet over moderately high heat until hot but not smoking, then sauté shrimp, turning over once, until just cooked through, about 2 minutes, and transfer with a slotted spoon to a large bowl. Add garlic to oil remaining in skillet along with red pepper flakes, wine, lemon juice, salt, and pepper and cook over high heat, stirring occasionally, 1 minute. Add butter to skillet, stirring until melted, and stir in shrimp. Remove skillet from heat. Cook pasta in boiling water until just tender, about 3 minutes. Reserve 1 cup pasta-cooking water, then drain pasta in a colander. 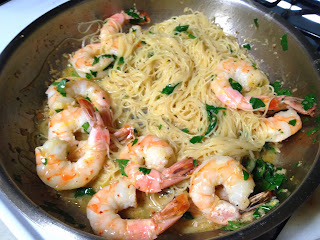 4.
Toss pasta well with shrimp mixture, lemon zest and parsley in the skillet, adding some of reserved cooking water if necessary to keep moist. 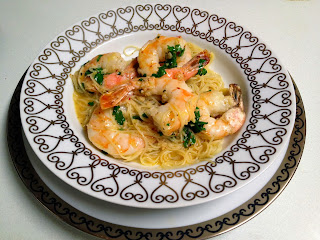 2 thoughts on “Shrimp Scampi, an amazingly fast Italian American Classic and the story of the Feast of the 7 Fishes.”