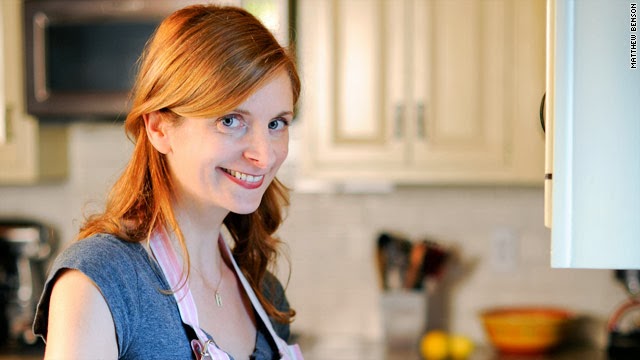 At the risk of people believing I must be going steady with Melissa Clark, I am rushing this out in advance of the latest winter storm.  Even though I just shared Melissa’s superb Pork Chop recipe the middle of last month, I could not resist posting this latest triumph from last Wednesday’s “A Good Appetite” column.  This is stuck-in-the house, freezing-cold-outside food at its finest.  It’s Melissa’s inspired combination of elements you find in a crisp potato gratin and in a cottage or shepherd’s pie.  It’s cheesy, rich and come to think of it, gluten-free!  It’s not the fastest dish in the world to cook which makes me think that if you’re going to be housebound for any length of time, it will be the perfect thing to prepare.  It also has the great advantage of being a one-pot dinner.  Well, that is unless like me and Melissa you feel it would look a whole lot better on a plate with a nice big green salad tossed in a lemon vinaigrette.  So what changes did I make to Melissa’s original recipe?  Don’t think I didn’t try to make the original….

Melissa mixed her potatoes with rutabaga, using a 50-50 ratio. Now rutabaga is what I grew up calling Turnips.  And I love the stuff. But amazingly there were no rutabagas in two markets I went to. So I went for a version completely topped with Russett or Idaho Potatoes. Melissa also added 3 cups of spinach to her creation.  She explained that a cottage or shepherd’s pie would traditionally contain peas but that spinach would more readily absorb the herb-infused cream that is poured over and baked into the dish.  I was all set to do so myself. But first I’d found a cache of

cremini mushrooms. I’ve been on a mission to shop my refrigerator first and stop having to toss perfectly good ingredients that somehow get lost under more recent purchases.  I knew the mushrooms would make a nice contrast to the ground beef.  But once they’d been added to the browned ground beef, there simply was no room in the cast iron skillet for the spinach.  So into the green salad it went.  Finally, again in my quest to shop the fridge, I found some sliced provolone, which melts beautifully even if it lacks the nutty goodness of the Gruyere in Melissa’s original recipe.  But the result was simply superb: Comfort food for a three-dog night. So if we’re having another one, might as well hunker down with this delicious meal.  Here is the recipe: 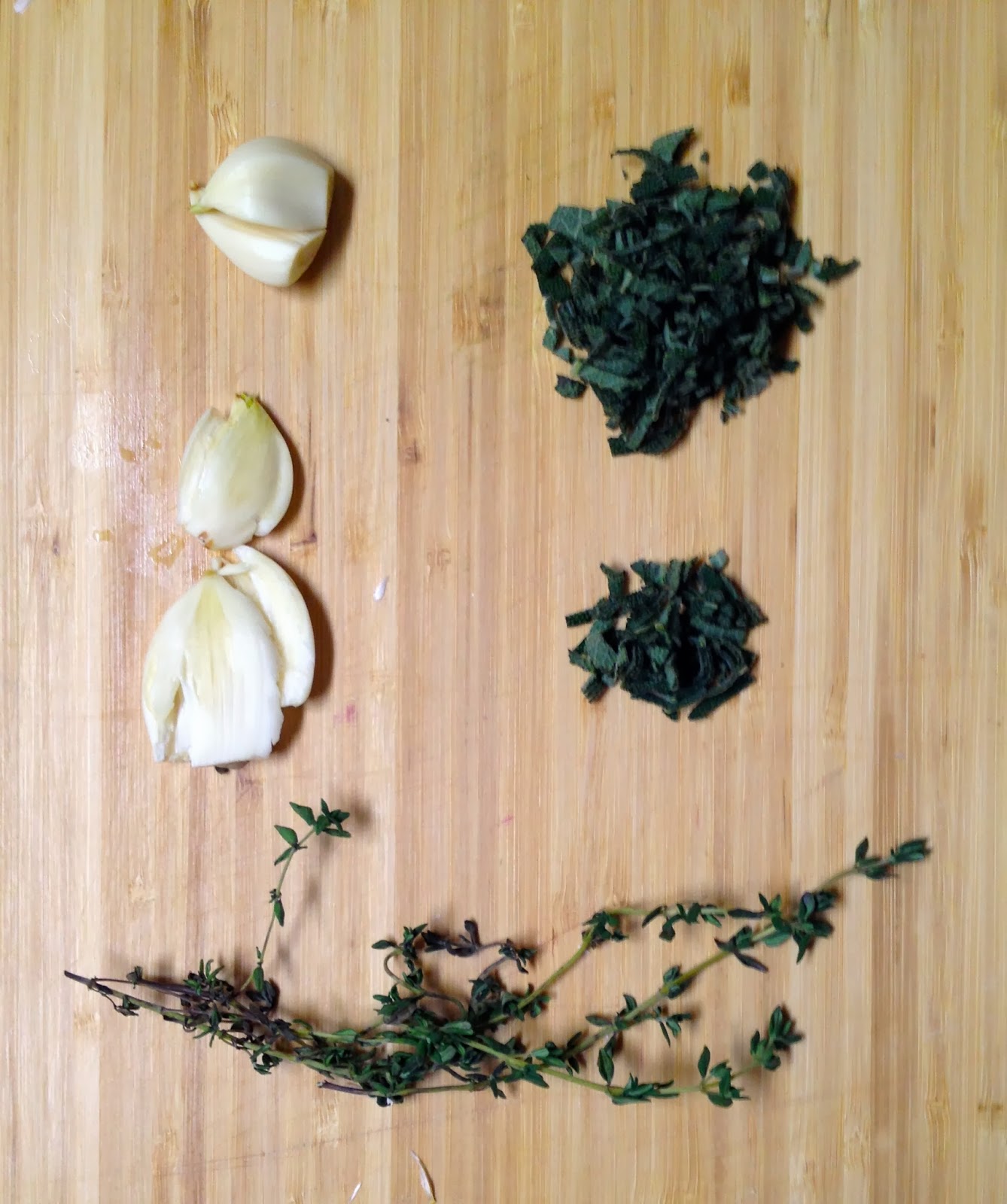 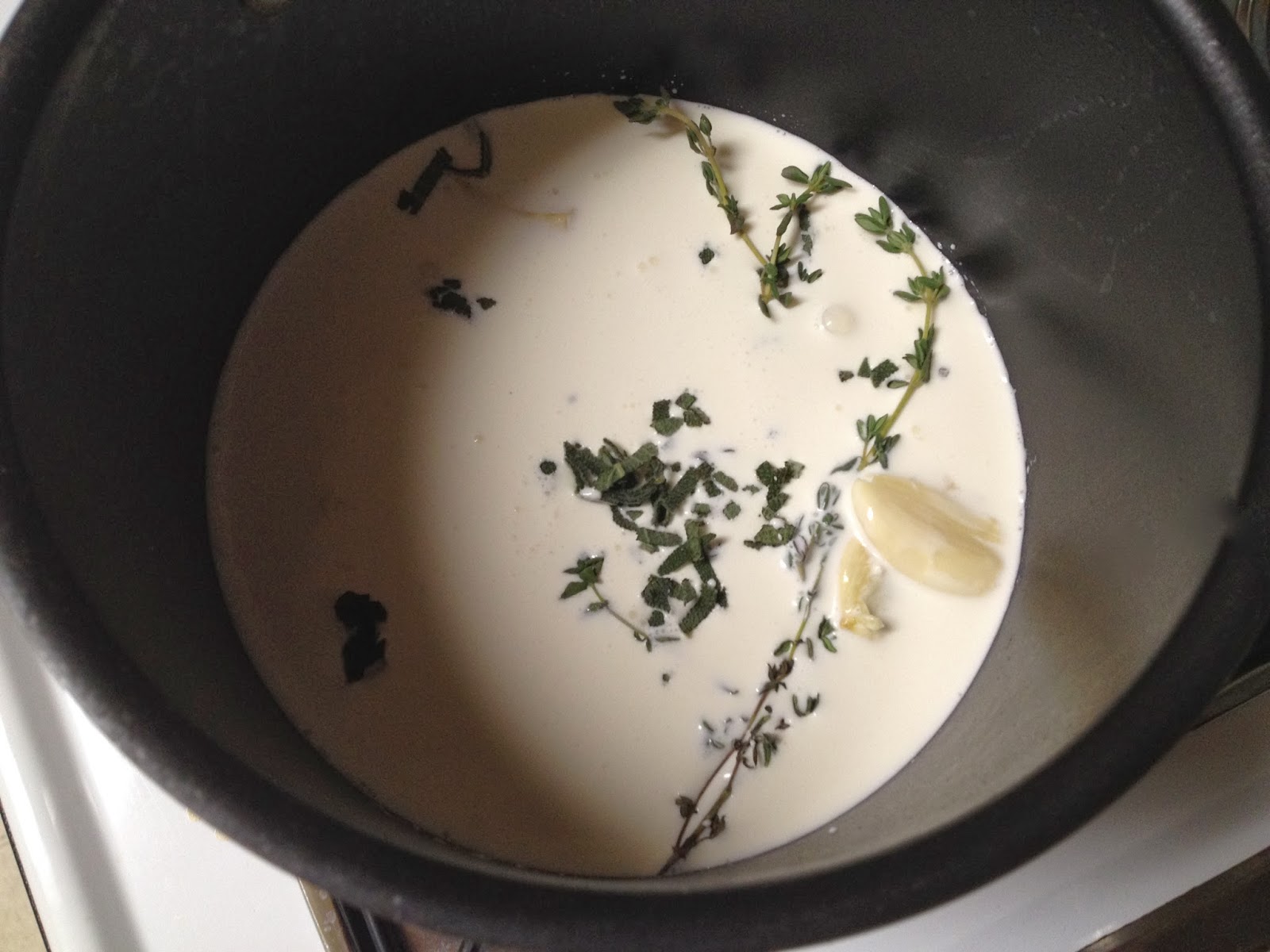 1.
Crush and peel 2 garlic cloves. In a small pot over medium heat, combine cream, the crushed garlic, the thyme and 1/2 tablespoon sage. Bring to a simmer; cook until reduced to 1 cup, about 30 minutes. Strain and cool. 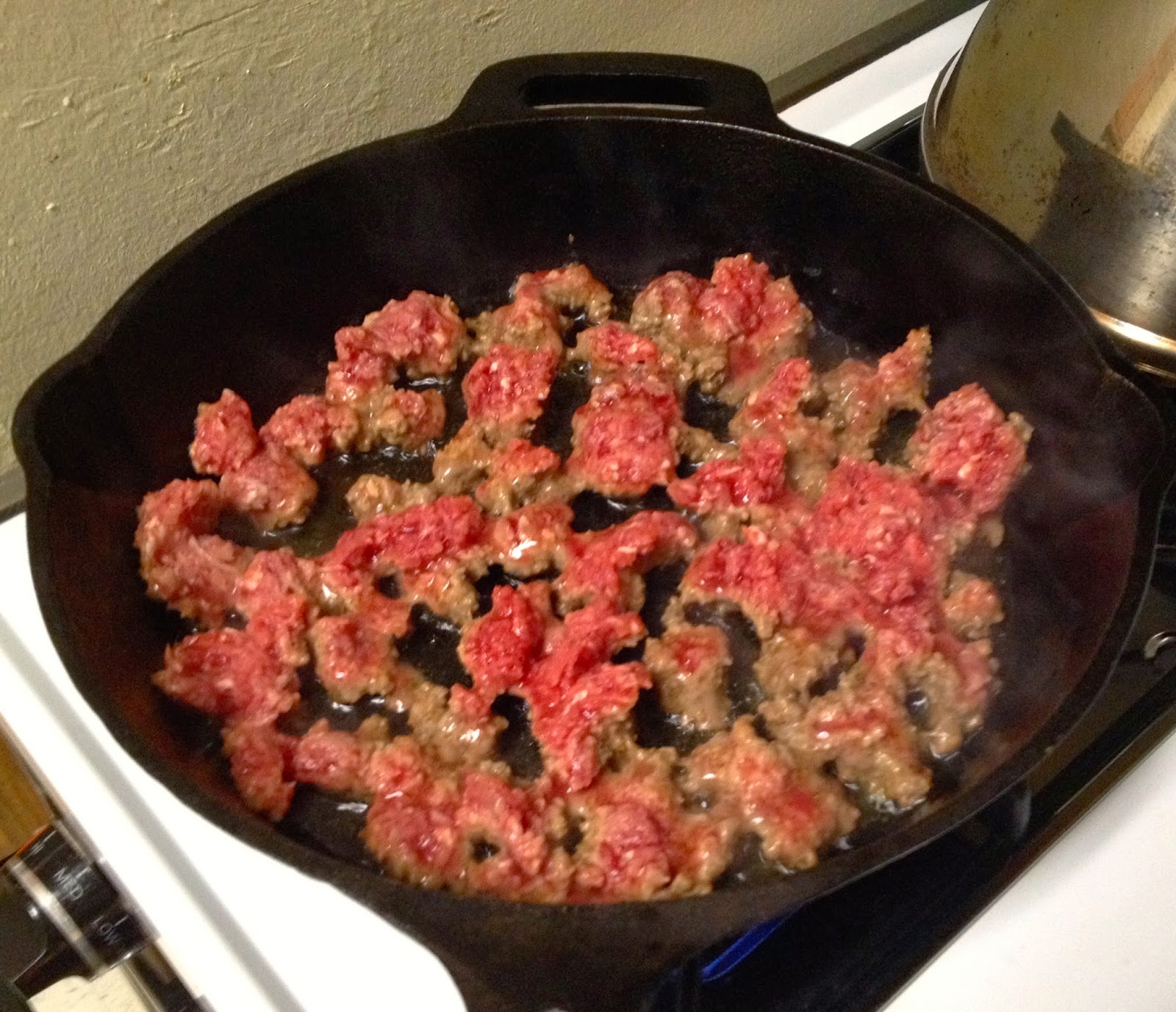 2.
While cream cools, heat oil in an ovenproof 10-inch skillet (preferably cast iron) over medium-high heat. Add half the beef and brown well, crumbling with a fork as it cooks. Season with 1/4 teaspoon salt and a few grinds of pepper; transfer meat to a paper-towel-lined plate. Repeat with remaining meat, 1/4 teaspoon salt and the pepper. 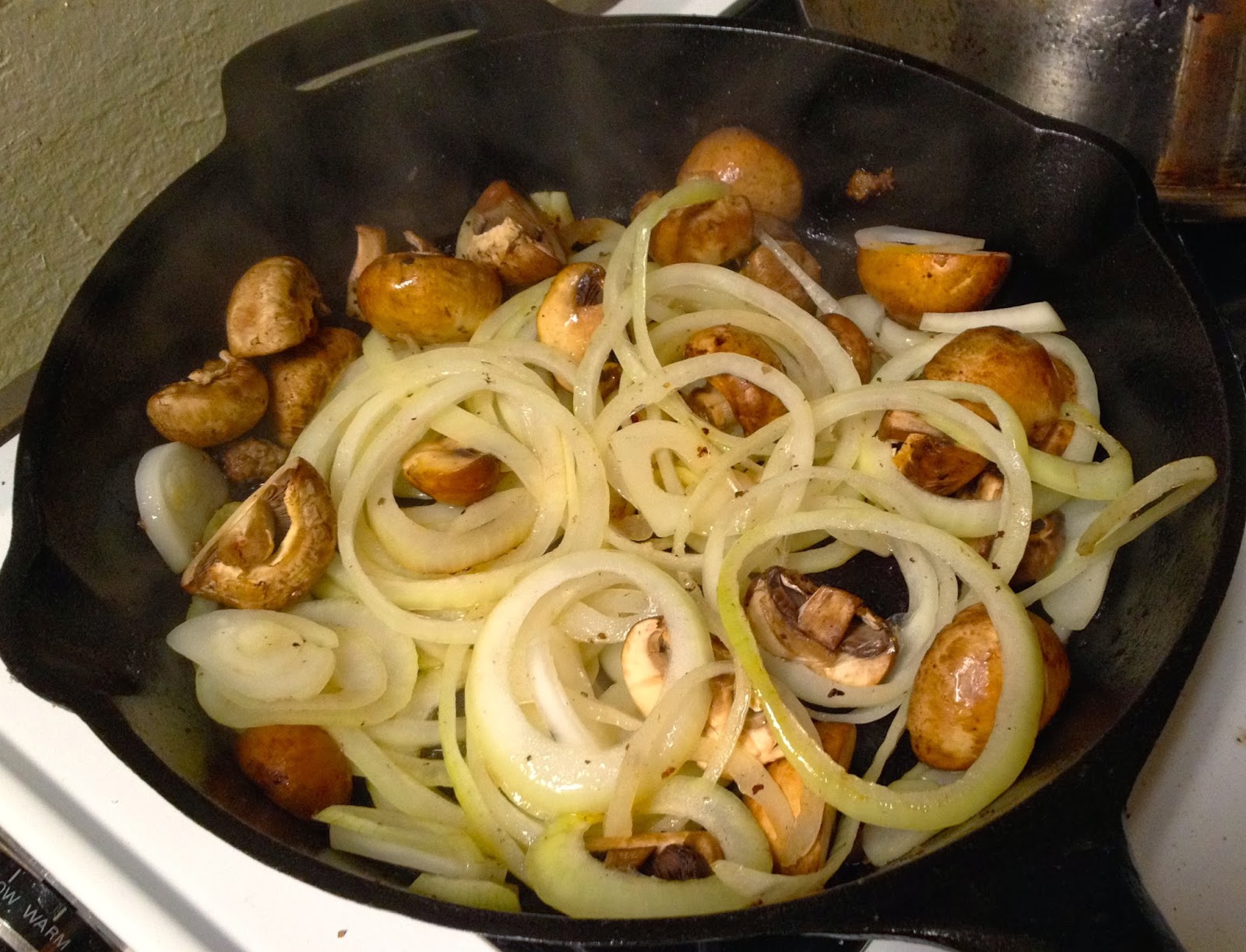 3.
Add onion and mushrooms to pan drippings (drizzle with oil if pan seems dry). Cook, stirring occasionally, until onions are tender and golden, and the mushrooms have released some of their liquid… about 10 minutes. Peel and chop remaining 2 garlic cloves; add to pan with remaining sage. Return meat to skillet. Season with 1/4 teaspoon salt, the Worcestershire and pepper to taste. 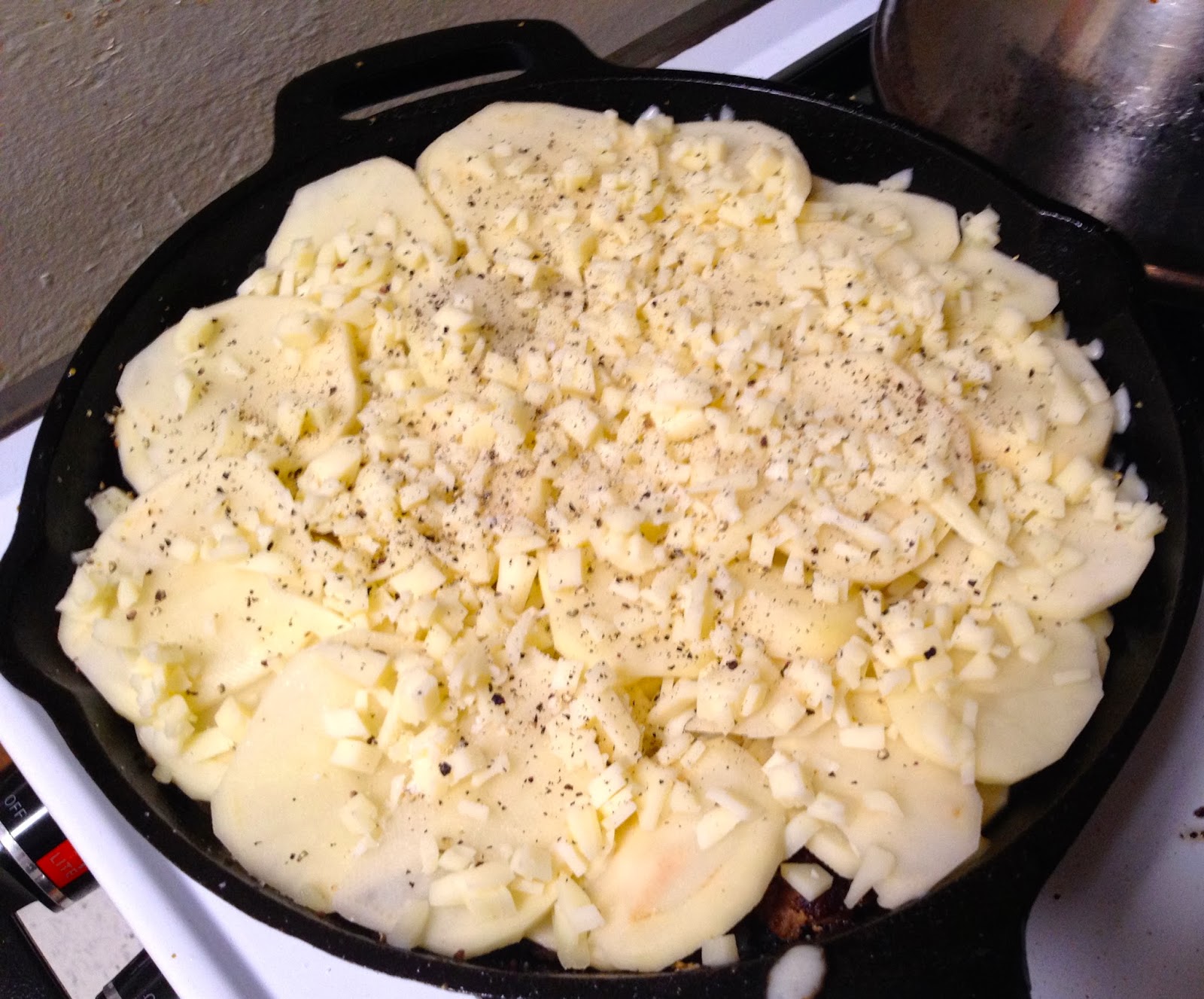 4.
Heat oven to 350 degrees. Peel potatoes and cut into 1/4-inch-thick rounds. Layer half the potato slices to completely cover the meat. Season lightly with salt and pepper; top with half the cheese. Repeat with remaining potatoes and cheese. Spoon reduced cream evenly over top. 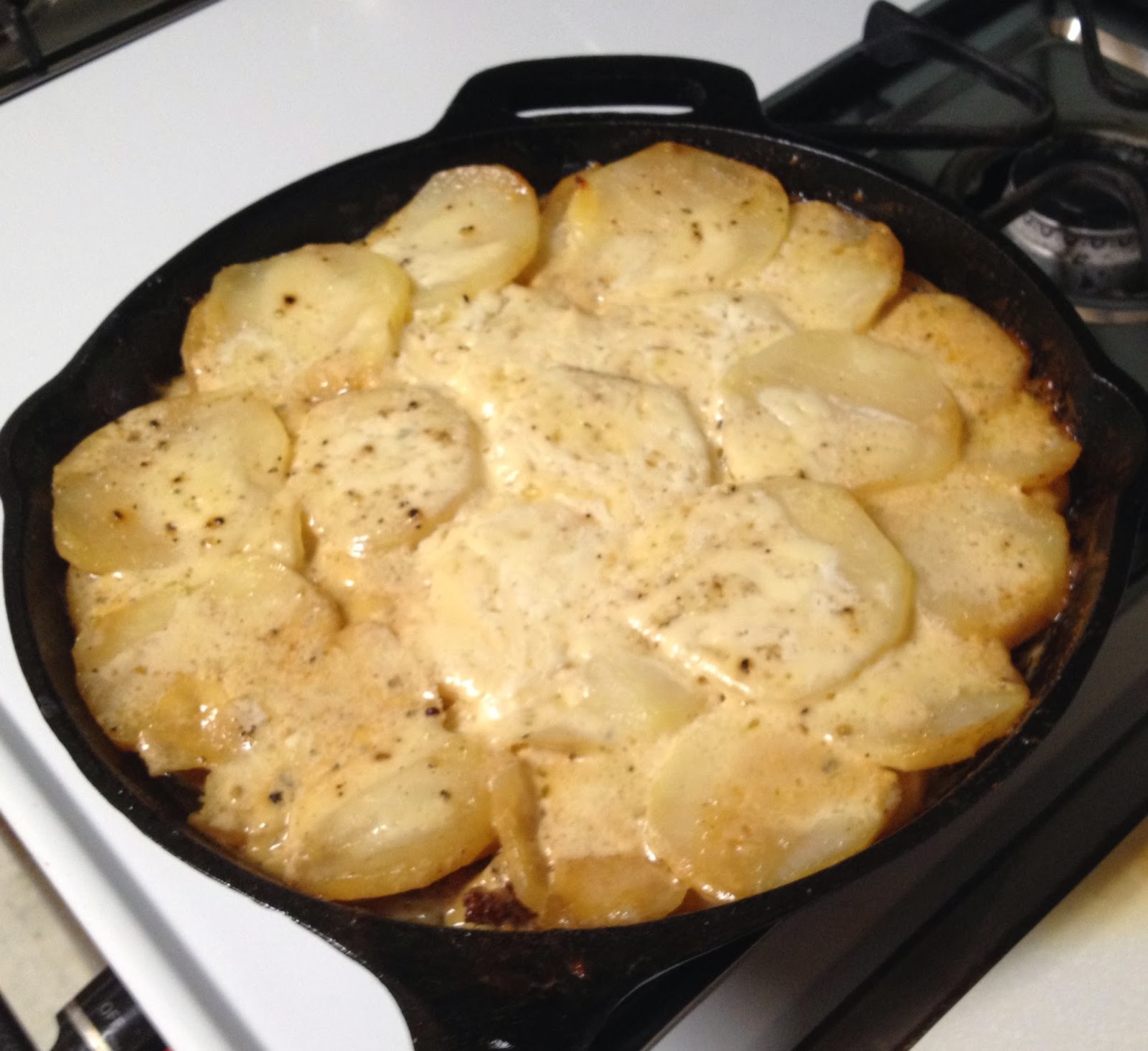