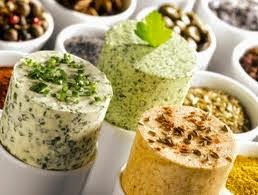 With Memorial Day upon us, the grill has been rescued from the garage and now sits waiting for its annual work-outs.  From now until Labor Day chances are it will see plenty of steaks and chops.  There’s nothing like the flavor of meat seared over hot coals.  But if you want to add a new element to your summer grilling, consider these terrific additions, all of which can come together in no time. And they can even sit a while in the fridge, freezer or pantry and be used again and again. 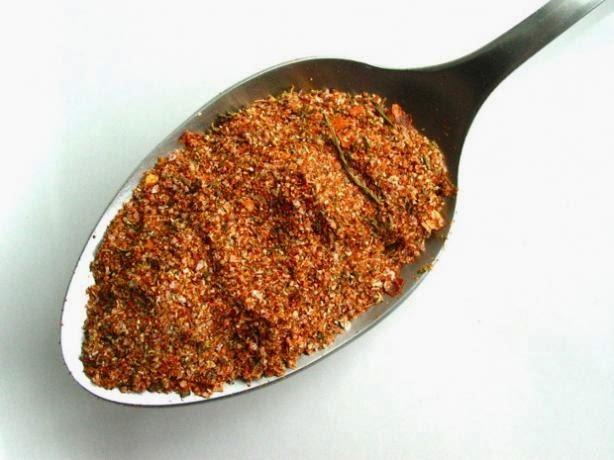 The first of these flavor additions shouldn’t be as foreign to me as it was:  You’d think something called Montreal Steak Seasoning would be old hat to this ex-Montrealer.   Strangely, I’d seen all over our Long Island supermarket but I’ve only just tried it.  It’s made up of seasonings I didn’t have to go out of my way to find: they are pretty standard stuff.  But their combination is an eye-opener and it will bring a very unique flavor to whatever beef it’s introduced to. 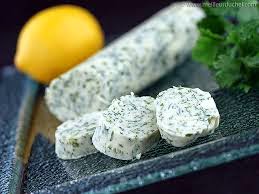 The second and third of today’s offerings are both compound butters.  Compound butters sounds a lot better in French where they are called “Beurres Composés” .  You can think of them as sauce that comes in a solid form because that’s how they act.   They are a snap to make requiring butter to be softened and then whipped with any number of herbs and spices. The butter is then remolded into  a log using either parchment or waxed paper or plastic wrap.  Into the fridge or even freezer they go and when they emerge, you slice them about ¼ inch thick and place a pat atop meat or vegetables where they melt into pools of delicious butter-y sauce.   When you use them on grilled meats, they change the mundane into something truly exotic and delicious.  I am offering up two of these.  They can be used completely interchangeably.  The Herbed Anchovy Butter is every bit as good on the lamb chops as the Marjoram Butter is on steaks. 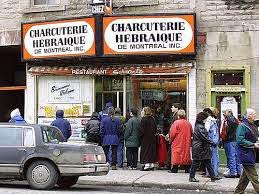 Let’s start with the Montreal Steak Seasoning.  There’s a delicatessen in Montreal which is pretty well a mandatory stop on any food tour of the city. Despite its humble appearance, Schwartz’s on Boulevard St. Laurent is a noisy, perpetually packed purveyor of Montreal’s signature smoked meat.  To make the smoked meat, pickling spice is rubbed all over beef brisket. The pickling spice has its origins in Eastern European Jewish cooking. A cook at Schwartz’s, Morris “The Shadow” Sherman, began adding the spice rub to his own rib and liver steaks.  Customers tasting these cuts soon started asking for the stuff themselves.  It became so popular, it’s the norm at Montreal’s steakhouses and delis.  Here’s the recipe which could not take longer than 10 minutes to put together: 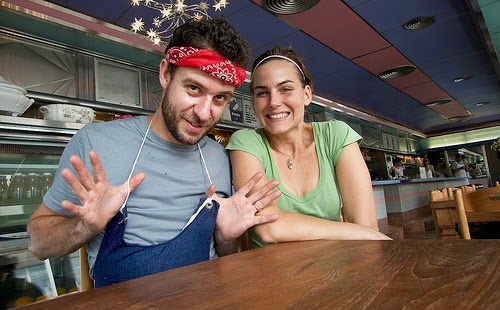 As mentioned, if I had this in Montreal, I wasn’t aware of it.  I was introduced to it in a recipe by another Montrealer, one who has taken New York by storm with his takes on the cooking of our native province.  Hugue Dufour is his name and everything about him is, how you say, unconventional.  Chef Dufour is an alumnus of Montreal’s quirky and absolutely fantastic “Au Pied du Cochon” a palace of over-the-top cooking covered in this Chewing the Fat post: https://www.chewingthefat.us.com/2011/10/our-trip-to-beautiful-montreal-and.html.  Chef Dufour and his wife, Sarah Obraitis arrived in New York and immediately crossed the river into Queens opening a diner in a location so off the beaten track, no one could believe it.  But their Quebecois cuisine soon attracted people to the neighborhood who previously had only passed through on their way to the airports.   They followed this by opening a steakhouse called M. Wells in a converted auto body shop.  There they’ve attracted a following for Dufour’s adaptation of classic dishes.  In the one that follows, Chef Dufour creates an homage to the minute steak.  Not just one minute steak but a whole stack of them.   Quick cooked, they are piled on top of each other with pats of a rich anchovy herb butter in between each layer.  Please set aside any aversion to anchovies and think of them as the salt in the butter.  As previously mentioned, you need not create the stack to enjoy this.  Any cut of steak or lamb chop will be blessed by its topping of Herbed Anchovy Butter. Here is the recipe: 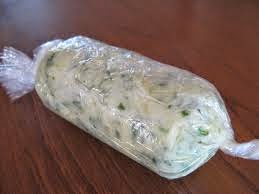 In a skillet, combine the anchovies, shallot and vinegar. Cook over moderate heat, stirring, until the anchovies break down and the vinegar has evaporated, about 5 minutes. Mash the anchovies with a wooden spoon. Transfer the mixture to a small bowl and let cool to room temperature. Add the butter, herbs and pepper and mix well. Scrape the butter onto a sheet of parchment paper and roll into a log or pack into an airtight container.
2.
In a large cast-iron skillet, heat the canola oil until smoking. Season the steaks on both sides with the Montreal steak spice. Working in 2 batches, sear the steaks over high heat for 30 to 40 seconds per side until well browned outside but rare. Transfer the steaks to a rack set over a baking sheet. 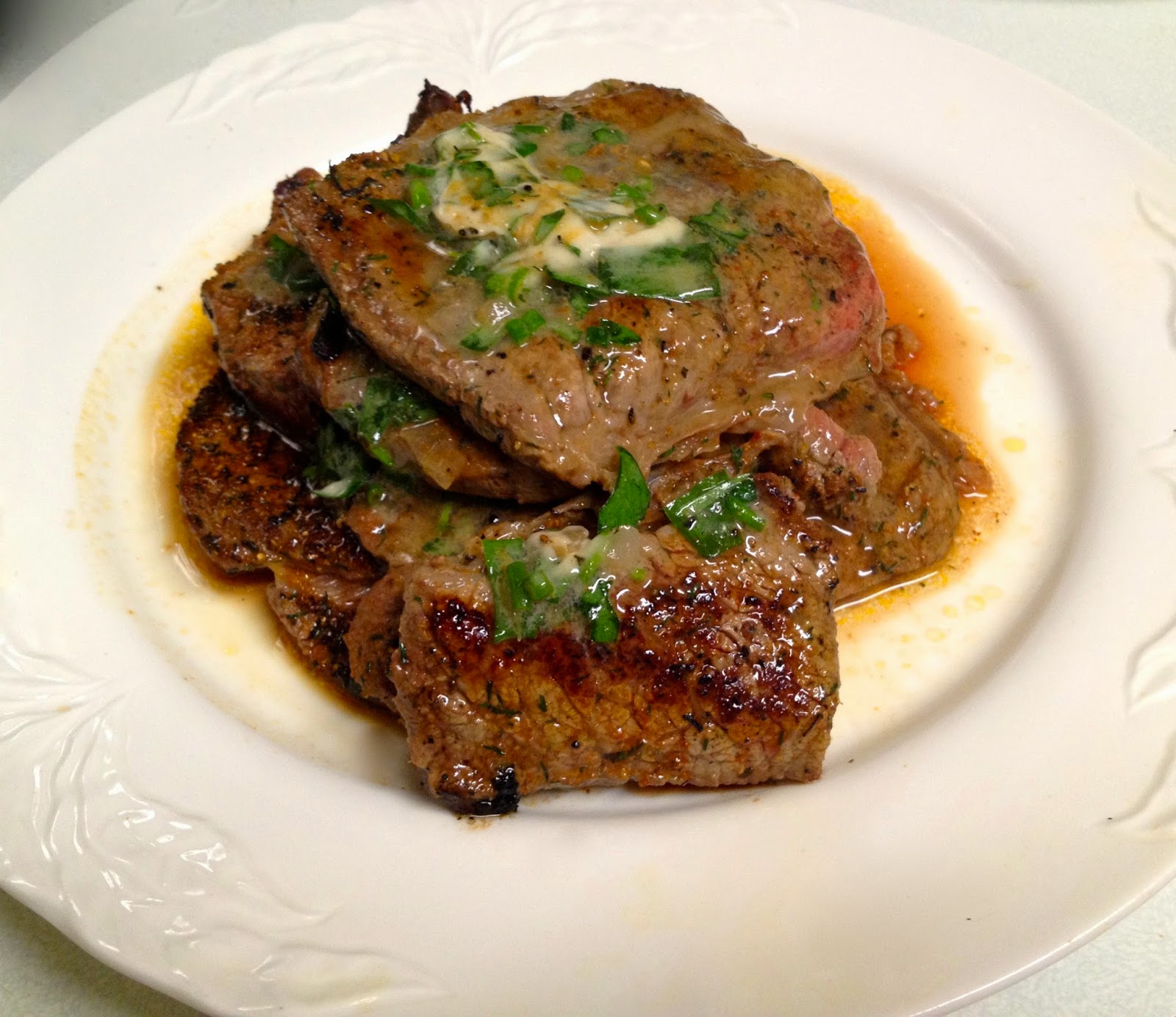 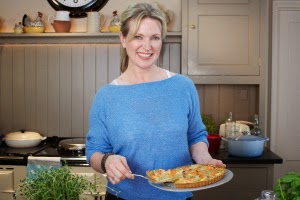 Lamb Chops are great on the grill and a staple in our house all ‘year round.  But I have to say, they can be awfully dull and there’s only so much Worcestershire Sauce can do.  So I was pleased to come across Rachel Allen’s recipe using Marjoram Butter to pick them up. Rachel Allen is the daughter-in-law of Ireland’s most famous cook, Darina Allen.  She attended her mother-in-law’s renowned Ballymaloe Cookery School at age 18 and after a stint in Vancouver, Canada, she returned there to teach.   Marjoram is not as ubiquitous as many other herbs so if you cannot find it readily, you can be forgiven for substituting oregano, thyme, sage or even basil.  All of these will give lamb a wonderful kick of flavor and this butter is excellent on grilled fish as well.  Here is the recipe: 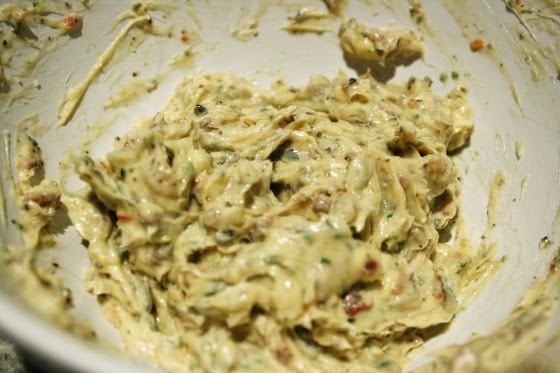 In a small bowl, mix 6 tablespoons of the butter with the marjoram, garlic and lemon juice. Season the butter with salt and pepper. Wrap the butter in a sheet of plastic wrap and shape into a log. Twist the ends to seal and refrigerate until firm, 30 minutes. 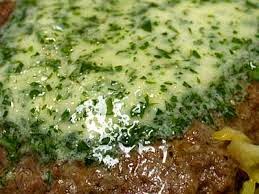 Light a grill or preheat a grill pan. Brush the lamb chops with olive oil and season with salt and pepper. Grill over high heat, turning once or twice, until nicely charred outside and medium-rare within, 6 minutes total. Transfer the chops to a platter and immediately top each one with a slice of the marjoram butter.