While I’ve been familiar with heirloom tomatoes for several years now, this year was my introduction to heirloom carrots in, of all places, Trader Joe’s.  It was there that I first saw a 2 lb. bag labeled Rainbow Carrots.   Last time I checked a rainbow had considerably more colors than these do but for all of us who grew up thinking carrots were a distinct shade of orange, these were real eye-openers.  They ranged from deep red through several shades of orange and to an almost white carrot that looked more like a parsnip.  The first time I cooked them, I leaned on my standard preparation, which involves boiling peeled whole carrots until they are tender, then quickly glazing them with some butter and brown sugar.  I can’t say that I noticed any real difference in taste between the various colors but if nothing else, they were a conversation starter.  Then I saw that Melissa Clark had written a recipe for them in her “Restaurant Takeaway” column in the Times.  The column is devoted to restaurant dishes that Melissa has whipped up making them accessible to home cooks by tweaking and testing then in hers.  And we should all thank her for this.  And certainly a word of thanks is due to David Santos, from whose Louro Restaurant (142 West 10thSt. at Waverly Place) Tel: (212) 206-0606 www.louronyc.com) Melissa purloined the recipe.

The closest thing to Miso Dressing that you and I may have eaten before is that ginger-y salad dressing that often precedes the arrival of your California roll at a sushi restaurant.  Miso is a salty paste made with white rice, soybeans and water.  That makes it gluten-free, if you are so inclined.   That salty taste also makes it the perfect foil for the sweetness of the carrots.  Unlike the first time I cooked them, here the carrots display their true colors on the plate.  They are first roasted in the oven with a hint of sugar.  The Miso sauce could not be simpler to make:  You just put the paste in the blender or food processor with some rice wine vinegar and some Mirin (both readily available in the Asian section of your supermarket).  Miso itself may be slightly harder to find.  In my Fairway, it’s in the Organic Section of the store. Melissa laid her carrots atop individual plates covered with a thin layer of the dressing.   I served it as a side dish so in addition to the layer of dressing, I also topped the dish with it. The only other step is to sprinkle some thinly sliced scallions over the dish for color and crispness. I have to give a special shout-out to my invaluable sous-chef, Mary Haskin, who is a complete whiz in the kitchen and was such a huge help to me this weekend!  Thanks Mary!  The dish is as elegant as she is. Here is the recipe.
Recipe for Roasted Heirloom Carrots with Miso Dressing from Melissa Clark and David Santos:
Takes under 30 minutes to make. Serves 6. 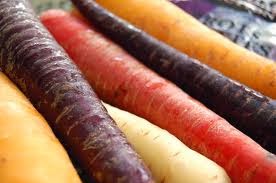 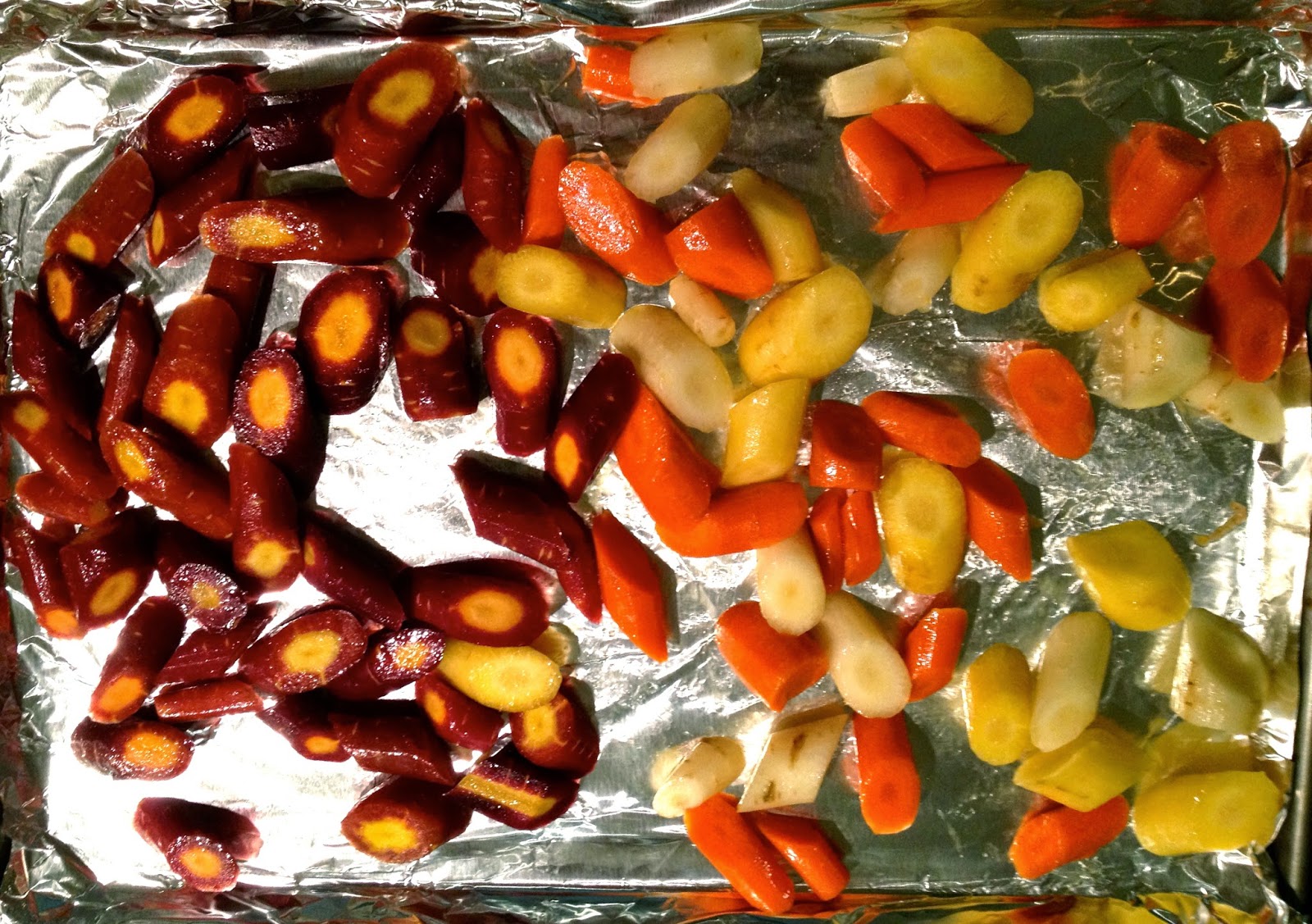 2. Cut carrots into 2-inch diagonal pieces. If using different colors, keep carrots separate so the colors don’t bleed into each other. Toss carrots with olive oil, 1 teaspoon sugar, salt and pepper. Lay carrots on a large baking sheet in one layer and roast until just tender but not mushy, 20 to 30 minutes. Let cool. 3. Meanwhile, place miso, vinegar, mirin and remaining 2 teaspoons sugar in a blender or food processor. Blend until smooth. 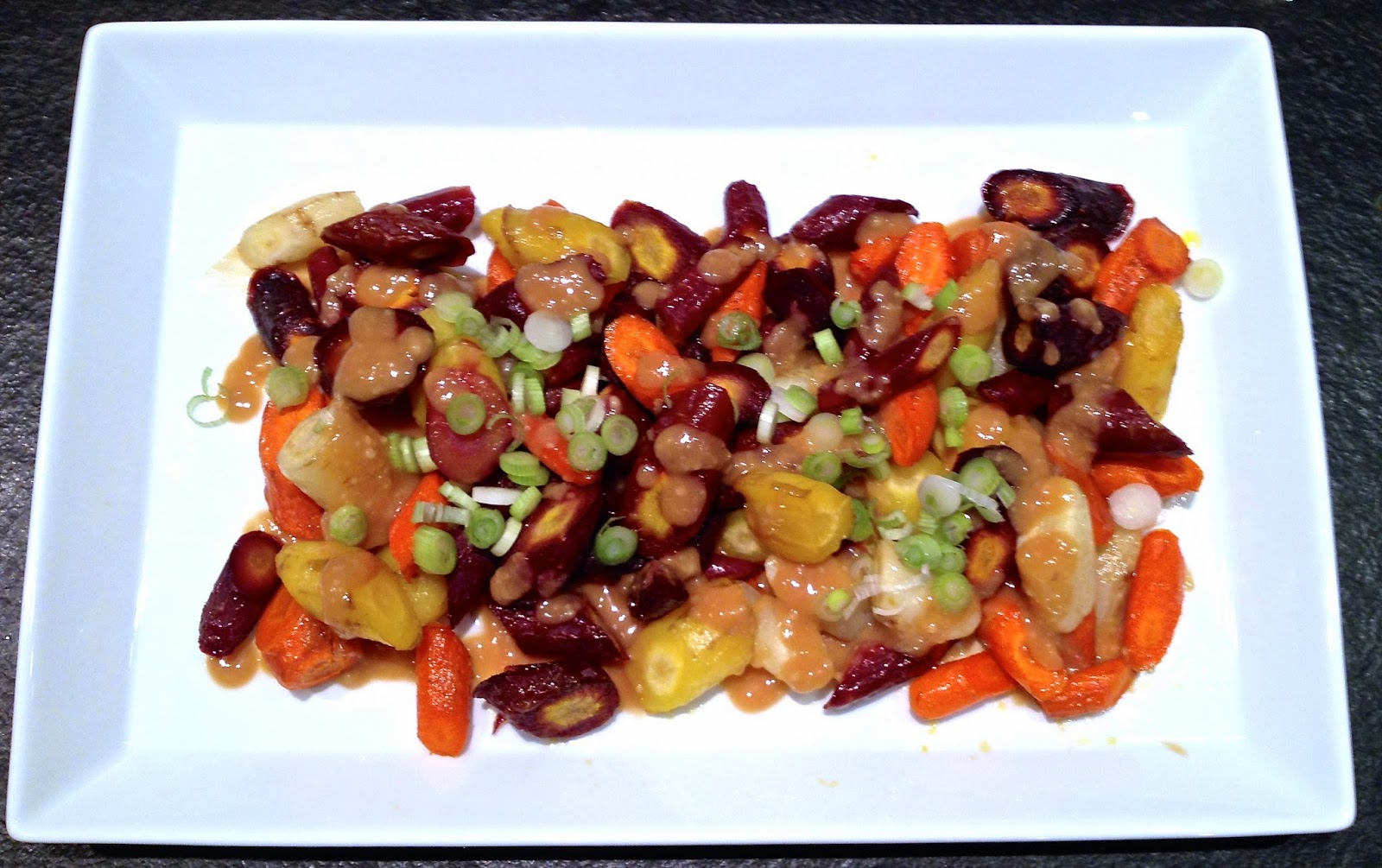