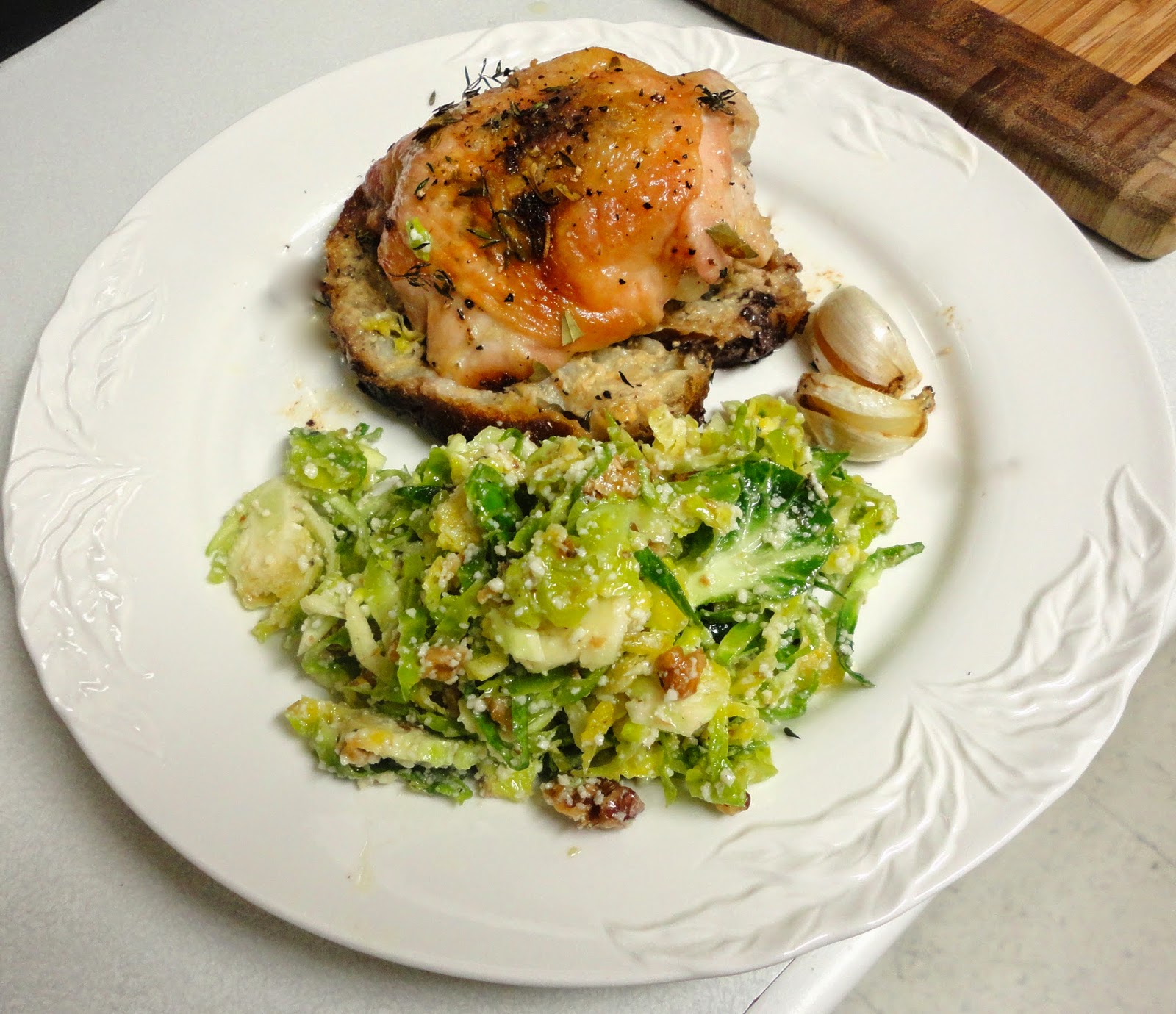 Mother’s Day is upon us.  It’s this Sunday, May 10th. It’s time for good children (and their fathers) to treat Mom to a day completely devoid of cooking.  Although you can go the restaurant route and take Mom out to dinner, I can’t help but think of my own Mother.  If I cooked for her at home, she would have applauded my thrift as much as any restaurant meal.  And what would I have made?  I immediately thought of this menu.  It is so simple that even most amateur of cooks can produce it easily. And it is simply delicious.  Besides, in a salute to Mother’s Day, another mother came up with this recipe.  And she created it from one given to her by her famous food-writer daughter, The New York Times own Melissa Clark. 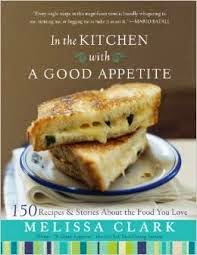 I can almost guarantee that once you have tasted this wonderfully aromatic baked chicken dish and its accompanying Brussels Sprouts Salad, you will be dying to know Melissa–and her mother– better.  All that will require is a once a week visit to Melissa’s “A Good Appetite” column in Wednesday’s New York Times.  Or better yet, you can revel in Melissa’s recipe craft in her great cookbook ” In the Kitchen with a Good Appetite” (Hyperion 2010) There you’ll find 150 reasons to love Melissa along with a collection of wonderfully written food-related stories.         The story surrounding this easy and delicious chicken recipe is this: Melissa’s Mother is forever reading her recipes in the Times just like the rest of us.  One day she called her daughter to say that she’d made her chicken recipe in the Times and reported that “it was terrific”.  Melissa immediately became suspicious because the elder Mrs. Clark, a psychiatrist, never follows recipes. As it turned she’d invented an entirely different dish but once you taste it, you too will thank her for her inventiveness.
Originally, Melissa’s recipe called for a whole chicken. What Mrs. Clark did was to substitute that for cut-up chicken parts.  And then, adding another dimension entirely, she slathered the “croutons” with good mustard.  The tangy taste of the mustard not only combined deliciously with the drippings from the chicken but it also added fabulous flavor to the bread underneath which crisps while roasting.
I cannot claim to be nearly as talented as either Melissa or her mother but I too substituted chicken parts for chicken thighs, which I would choose hands down over any part of the bird.  The thrifty side of me, inherited in my case from dear old Mom, reveled in using some days-old ciabatta bread which was superb.  Lacking a small roasting pan, I opted for Pyrex baking dish and placed it on a metal sheet pan to distribute the heat evenly.  Do make this dish.  It takes just over an hour to cook but all of about 15 minutes to prepare.  The Brussels Sprouts salad comes after.  Here are the recipes with thanks to both Ms. Clarks.
Recipe for Melissa Clark’s Mother’s Thyme Roasted Chicken with Mustard Croutons
Country bread, ciabatta or other sturdy bread, preferably stale and     sliced 1/2 inch thick
Dijon mustard, as needed
Extra virgin olive oil, as needed
1 1/2 teaspoons kosher salt, more as needed
1 (4 -5 lb) chicken, cut into 8 serving pieces, rinsed and patted dry
Or two skin-on chicken thighs per person
1 head garlic, separated into cloves (but not peeled)
1 bay leaf, torn into pieces
1/2 bunch thyme, sprigs 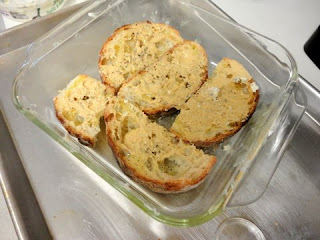 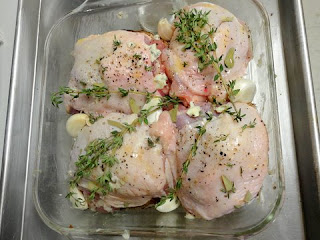 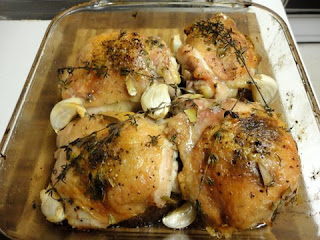 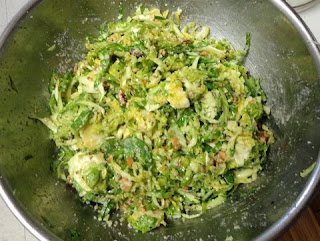 I can’t say that Andrew and I are huge fans of Brussels Sprouts.  As a child, they were often pushed around my plate and left uneaten.  Since then, we’ve enjoyed some really nice recipes using them.  So when I saw this take on them, I wanted to try it.  I enjoyed the crunch of the sprouts and the toasted walnuts, the tang of the cheese and the lemon juice.  Andrew, however, did not.  This recipe makes a lot of Salad so I had plenty left over.  Remembering a Thanksgiving recipe of Brussels Sprouts and bacon,  I revisited the salad, folding in some crispy bacon and then putting the whole thing on the stove and stir-frying the sprouts.  The results were much more appealing to Andrew.  And it sounded like something Melissa wouldn’t mind.  After all, her mother changes Melissa’s recipes all the time. 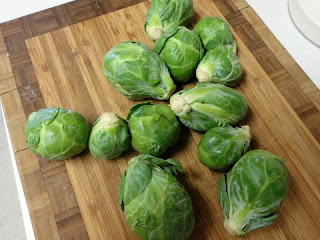 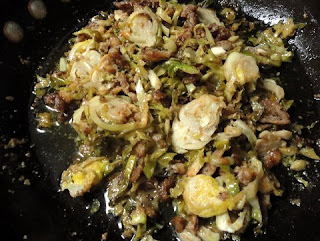 Put the Brussels sprouts into a food processor fitted with the slicing disc.  Put the sprouts in a bowl and toss with lemon juice and a little salt and pepper. Let stand for 5 minutes. Add the olive oil and toss well. Gently stir in the walnuts and cheese. Taste and adjust seasonings. Serve immediately or let stand for one hour before serving. Alternatively, add the cooked bacon, put the ‘salad’ in a large skillet and cook for 5 minutes over medium high heat. Serve.