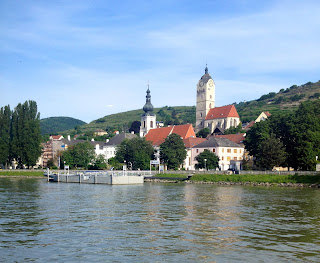 Today, we awoke the find the Longship Tor cruising the stretch of the Danube between the villages of Krems and Melk.  This beautiful stretch of the river, the Wachau Valley, is as far from the urban centers we’d just visited as could be.  Here, medieval towns and castle ruins are strung between terraced vineyards that produce Austria’s best wines, renowned for their quality. Austria’s reputation is built on its great whites.  However the appearance of Austrian Pinot Noir at the dinner table aboard the Tor suggests that reds are making inroads. Barely 3 percent of the country’s wine crop comes from this Wachau Valley but its fame far exceeds that figure. 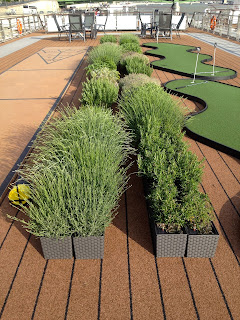 We spent most of the morning on the top deck, which is outfitted with sun umbrellas and lounge chairs.  There’s even an herb garden which the Chef uses daily to season our meals.  It sits right up top next to the putting green, and yes, a shuffleboard court, the only nod to a traditional cruise ship on the Tor.

The herb garden is on the same deck as the Wheelhouse.  Because of the varying depth of the river and height of the bridges we pass under, the wheelhouse itself can be adjusted up or down.  Thus far, it has remained in its full upright position. This will change in a couple of days when we enter the Main-Danube canal. There the clearance is so tight, the deck is off limits to passengers and the wheelhouse sometimes has only 6 inches of clearance between its top and the bottom of the bridges we cross under.
Every town is dominated by a Church.  Catholicism is deeply imbedded in Austrian culture to the point that a common greeting is “Grüss Gott”, or God bless you.  Nowhere is this domination of a village landscape more visible than the Melk Abbey.  This is Austria’s second most visited landmark, bested only by the Shöenbrunn Palace in Vienna. 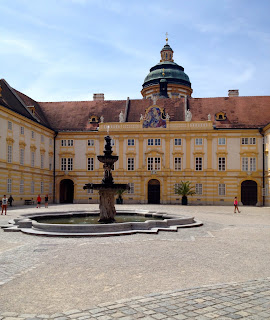 The origins of the Abbey go back to the 11th century when King Leopold II presented the palace to Benedictine Monks who turned it into a fortified abbey.  The current abbey was built between 1702 and 1736.  It was not merely home to Benedictine monks, but also a Royal Palace with ceremonial court rooms and a staggering number of guest apartments.  The royal entourages often consisted of 300 people all of whom had to be lodged, hence the enormous size of the place.
The royal apartments survive. No longer a royal retreat, the Abbey serves as a school for 900 children aged 10 to 18. Today there are only 30 monks there and I had to wonder how so few teachers teach so many students.
The centerpiece of the Abbey is the “Stiftskirche” or Abbey Church. As many of you know, I am a devout Episcopalian but nothing prepared me for the sense of awe this jaw-dropping church gave me.  It is truly a baroque extravaganza and, as my new friend Al, a retired Lutheran minister from St. Louis pointed out, meant to conquer the growing threat to the Catholic Church that Martin Luther provided.  The idea of this magnificent structure was to lift your eyes up to the kingdom of heaven and to convince any fence-sitters that the Roman Church was the only place to experience all its glories.
Quite honestly, if this trip ended today, I would truly have felt that I had experienced everything this cruise has had to offer.  Even the views of the village below reminded me of so many childhood books of fairy tales and castles and everything I’d ever imagined a fairy tale kingdom to be.
The Breathtaking Interiors of Stiftskirke, the Church of the Abbey of Melk 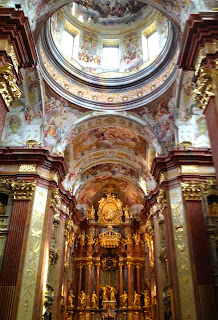 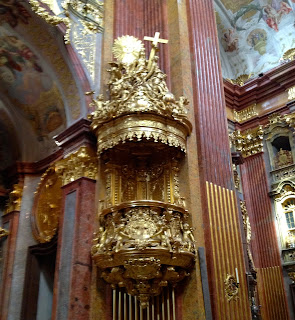 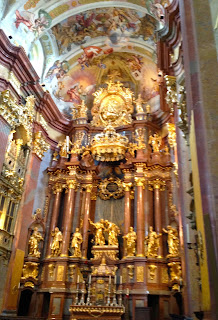 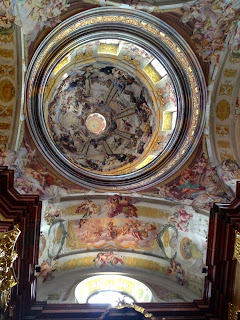 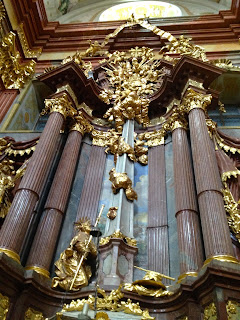