As a lot of my readers know, I am from the province of Quebec in Canada.  Even though I have lived my entire adult life in the States, I still revere my Canadian roots and I am very proud of my home country and all that it stands for.  My hometown, Montreal, is one of the world’s great places to eat.  But today’s recipe is for an item you likely won’t find in too many restaurants.  Where you will find it is on the tables of Quebecois homes because if there’s one item that is universally loved in Quebec, it is our Maple Syrup. And from that maple syrup comes a pie that is as much a part of winter in Quebec as snow. Its crust is the simplest possible: just four ingredients –flour, butter, salt and water.  Once it’s in place in the pie dish, the filling of pure maple syrup, beaten eggs and butter, cream, and a little flour and salt is poured over the crust.  It perfumes the house and once out of the oven, the one to two hour wait for the pie to cool is sheer torture.   Finally, you are rewarded with this decadent winter treat that is best appreciated with a large scoop of Vanilla Ice Cream to blunt the intense sweetness of the pie.  Not everyone thinks it needs this addition; our friend Jim took one bite and pronounced the pie as good as eating pancakes and maple syrup. But I’d go for the Ice Cream. 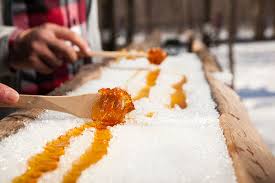 It is hard for non-Canadians to understand how deeply ingrained Maple Syrup is in our culture. Our flag should be a cue; that red leaf in the middle of it is in fact a Maple Leaf.  Virtually all schoolchildren in Quebec province are taken annually, to “Sugaring Off” Parties where we learn how the amber liquid is made and then eat vast quantities of the stuff which is ladled onto snow in troughs where it hardens enough to be picked up and eaten. We Canadians love our Maple Syrup so much, that it is almost unheard-of for visiting friends and relatives not to arrive with quantities of our national liquid.  So it was last summer that our dear friends Ann and David arrived on Long Island with four full cans of the finest syrup.  And from that, Andrew created this famous and well-loved pie. 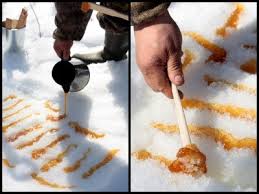 Maple Syrup has a long history in Canada. Like the man who ate the first oyster, I wonder who initially decided to tap into the maple tree in Spring, when the sap runs.  But the indigenous people did.  Until the 1930s, the United States produced most of the world’s maple syrup.  Canada has long since out-produced the U.S. Today Canada produces 80 percent of the world’s maple syrup.  And in Canada, Quebec outstrips every other province producing 75 percent of the total global production. This translates into a staggering 6,500,000 gallons.  At last count there were more than 7000 producers in the province.  And like Reggiano Parmigiano in Italy and the AOC in France, there’s even a governing body, the Federation of Quebec Maple Syrup Producers (Fédération des producteurs acéricoles du Quebec) which controls production and gives producers a quota allotment each year. They even maintain reserves of the syrup.  Sounds suspiciously like OPEC, doesn’t it?  Hopefully, you have a supply of Maple Syrup on hand or you can find the genuine article in your supermarket.  Here is the recipe: 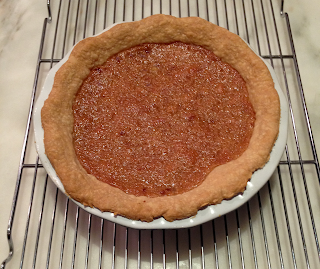 Recipe for Maple Syrup Pie a la Quebecoise.
Serves 8. Takes 4 hours to make start to finish including 1 hour resting the refrigerator and two hours cooling.  In a pinch, you can cut the cooling time down.
For the All-Butter Pie Crust:
1 1/4 cup unbleached white or spelt flour
1 stick (1/2 cup) cold butter
1/4 tsp. salt
About 3 to 5 Tbsp. ice water 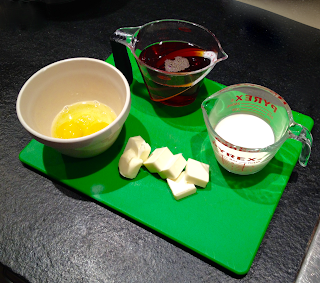 For the Maple Pie Filling:
1 1/2 cups pure maple syrup
6 Tbsp. butter
1/2 cup whipping (35%) cream
1 Tbsp unbleached white flour
1/4 tsp salt
2 eggs
Directions
Make the Pastry:
1. Cube the cold butter into small pieces and then incorporate it into the flour and salt, using a pastry blender or a food processor, until it is the size of tiny peas. Add the ice cold water, a tablespoon at a time and mix until the dough comes into a ball. Be careful not over-handle the dough which will result in a tough pie crust. Flatten the ball of dough into a disc, wrap in parchment paper or plastic and let it rest in the refrigerator for an hour. 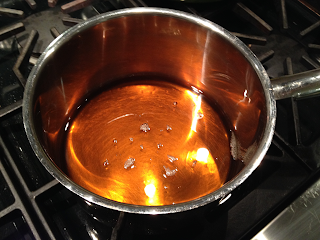 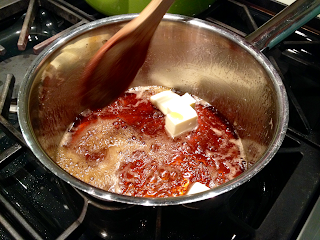 3. Remove the saucepan from the heat and stir in the butter until melted. Add the cream and stir. 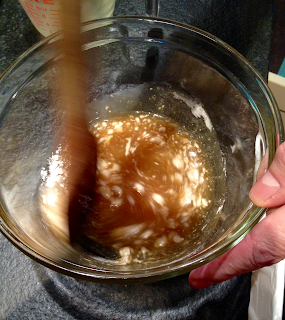 4. Transfer about 1/2-cup of the mixture to a small bowl; whisk in the flour and salt and then whisk this back into the mixture in the saucepan. 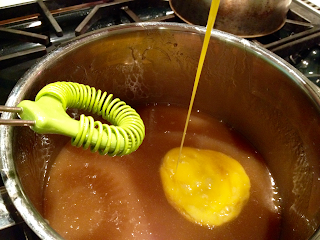 5. Beat the eggs in a small bowl and then whisk them into the mixture in the saucepan. Mix together briefly, until the consistency is smooth and even. 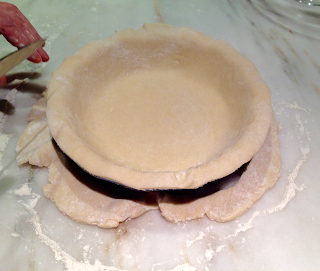 6. Roll out the pie dough and place it in a 9-inch pie plate. 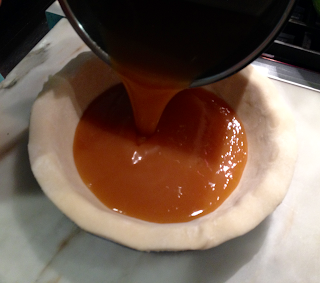 7. Pour the warm filling into the pie shell.

8. Bake it in a preheated 350ºF oven, on a rack positioned in the middle of the oven, for about 50 to 60 minutes or until the centre is golden brown and bubbly, and relatively firm when lightly jiggled back and forth (it will be a bit wobbly and that’s ok).
The pie should ideally be allowed to cool completely before slicing, a minimum of 1 to 2 hours.
Author: Monte Mathews
Filed Under: Desserts, Maple Syrup history, Maple Syrup Pie a la Quebecoise, Pastry, Pies, Quebec Maple Syrup Pie, Quebecois Cuisine, Tarts
One of Andrew’s Top Ten Cakes of All Time: Rumfest’s Ding Dong Cake
A gorgeous addition to any Easter Table….Andrew decks out Ina Garten’s Coconut Cupcakes and Chewing the Fat celebrates our One Millionth reader!