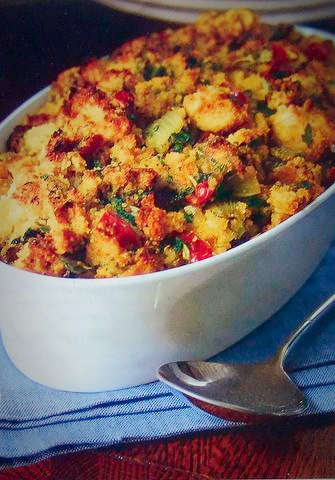 In this month’s Food and Wine, A.O. Scott, who normally writes movie reviews for The New York Times, took it upon himself to cast a critical eye at Thanksgiving.  The man’s premise is that the Thanksgiving table is a breeding ground for good manners, “also known as lying”.  Specifically, in his family the lies revolved around his Grandfather’s Oyster Stuffing.  Apparently this particular stuffing set the standard for particularly dreadful. “A quivering pale mass on the edge of my plate”, is how he describes it.  Then one Thanksgiving, his grandfather, who was actually quite a good home cook, showed up with homemade Cornbread Stuffing made to include his own homemade sausages.   Needless to say, it was greeted with great whoops of pleasure, quickly stifled because to love Grandpa’s Cornbread Stuffing was to not love his Oyster version. Mr. Scott’s story had a certain resonance in our house.   Many years ago, Andrew had brought to the table his Mother’s recipe for Cornbread Dressing.  His mother’s Cornbread recipe was the standard that all others had to live up to. And it was delicious, an old southern family favorite from her native Alabama. However when I came on the scene, I insisted on the addition of sausage because that was always in our family version. So we ended up with a blended version. But it still lacked something.  Color for instance.
Then a few years ago, I came upon a recipe loaded with celery and its leaves, parsley and finally two whole red peppers.  Color came to Thanksgiving.  And we are all so glad it did.  So if you’d like to up the ante this holiday, here’s a Cornbread and Sausage Dressing that will do it.  But don’t be surprised, if only out of good manners, someone requests the dressing you’ve been bringing to the table since grandpa knows when.

I stuck to his mother’s cornbread recipe because there was no need to improve on perfection. The changes I made were to the add-ins and, of course, the sausage. Now this recipe serves 24. (We were 21 the first I made it.) I had a lot leftover so I would suggest that halving it, which is very easy to do, and creating one dish for 12 would likely be fine even for 21.  You can make this up in advance and cook it the day of. You can also use store bought corn bread to save time.  Here is the recipe. 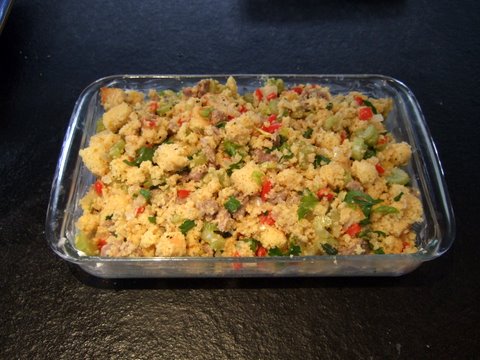 Recipe for Cornbread and Sausage Stuffing:

First make the cornbread:
(For two loaves or 24 servings, follow this ingredient list. For 12, simply half the quantities.)

1. Preheat the oven to 375 degrees.
2. Grease and flour two 9x9x2 inch metal baking pans.
3. Whisk together the first 5 ingredients in a large bowl to blend. Add milk mixture to dry ingredients, stirring until the batter is just moistened. Divide the batter between the two pans.
4. Bake the cornbread until tester plunged into the center of each comes out clean (about 30 minutes). Cool completely in pans.
This can and should be done a day ahead. Cover the cornbread with foil and store at room temperature. 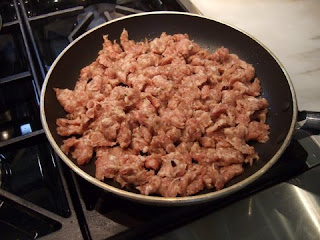 1. Remove the sausage from its casings and break it down into bite sized pieces. In a large saucepan, cook the sausage over medium heat, futher breaking it down with the back of a wooden spoon. Once it is completely cooked through, remove from heat, divide in half and set aside.
2. Butter two 13x9x 2-inch glass baking dishes.
3. Melt ½ cup of butter in large, heavy skillet over medium high heat. Add two cups of celery, 2 cups of onions, 1 bell pepper, and 4 sage leaves (or 1 tbsp. dried). Saute until the vegetables are just tender, but not brown, about 15 minutes.
4. Cut cornbread loaf into ½ inch cubes. Place in a large bowl. Add half the sausage then add 1 cup of parsley, ½ cup celery leaves, and sautéed vegetables.
5. Beat four eggs, 1 ¼ cups stock or broth, 2 tsp. salt, and 1 tsp. pepper in large bowl to blend, stir into cornbread mixture. Put the dressing into one of the baking dishes.
6. Repeat this entire process with remaining vegetables and cornbread to make the second batch. (This can be done three hours in advance of when it is needed. Cover with foil and refrigerate.)
7. Preheat the oven to 350 degrees. Bake the dressing, covered, for 40 minutes. Remove the covering and bake until cooked through and beginning to brown on top, about a half hour later.