Beef with Broccoli and Fried Rice I love Beef with Broccoli. It was one of the first Chinese dishes I ate when I came to New York.  Those were the days before Hunan and Szechuan restaurants took over from their Cantonese forbearers and forever changed the way our palates perceived Chinese food.  In the case of Beef with Broccoli, the appeal of the dish was in the small pieces of steak stir-fried with crisp Broccoli florets in a dark, sweet, soy and oyster sauce.  But the truth is Beef with Broccoli has little or nothing to do with true Chinese food.  The Broccoli used, for instance, isn’t close to Chinese Broccoli but instead was popularized in this country by Italian immigrants.  And cattle were far too valuable as beasts of burden to use as food.

Almost all Chinese food found in restaurants in this country was adapted to American tastes early on.  The first wave of Chinese immigration brought miners and railroad workers to California in the 19th century.  Eventually, laws were put into place preventing the Chinese from owning land. “Chinatowns” grew as the Chinese lived together in what really amounted to Ghettos.   It was there that the Chinese opened restaurants that served mainly the local Chinese populations.  San Francisco was the home to sophisticated Chinese cuisine and some truly luxurious restaurants.  But as the Chinese population moved out of California and into smaller towns, they opened restaurants.  Often their owners were self-taught home cooks.  These chefs improvised with both cooking techniques and ingredients. In the process, they created American Chinese cuisine to please American tastes. Very often their dishes were blander, thicker, and sweeter than anything on offer in China itself.  But their popularity only grew and as Americans discovered a taste for Chop Suey and Chinese take-out.

Ironically, mainland Chinese became intrigued with all things American including 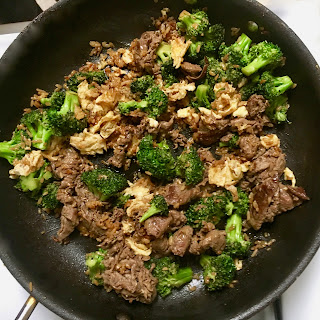 Beef with Broccoli first appeared on Chinese restaurant menus in the late 1920s.   I’d been looking for a recipe for the dish for quite some time but not quite that long. I had made versions that left me cold.  The beef was tough, the broccoli had lost its verdant green color and the sauce was wimpy and all but disappeared into the pile of white rice I’d poured it over.  Then I made two discoveries:  Shaved Beef at Trader Joe’s and a suggestion to cook the beef and the broccoli with leftover rice from our last Asian dinner delivery. Usually leftover rice lives in our refrigerator until it is discovered some weeks later inedible.  This was a use I could get into. Throw in scrambled eggs and I couldn’t wait to get started.  Shaved Beef is found in Trader Joe’s meat section. It’s fresh, very thinly sliced rib-eye and bottom round. It makes the most fantastic cheesesteak sandwich but that’s another post. Here I lifted the individual pieces out of their container and arranged them on a cutting board.  They were ideal.  If there’s no Trader Joe’s in sight, I’d use sirloin, sliced at thin as I could.  Get everything ready first because the whole dish takes under 30 minutes to make.  Here is the recipe:
Recipe for Beef with Broccoli and Fried Rice
Serves 4 to 6. Takes under 30 minutes. 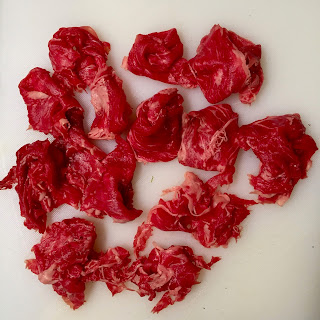 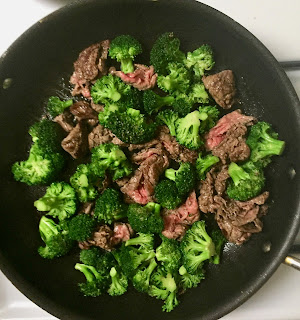 2. Heat 1 tablespoon of the oil in a large nonstick frying pan or wok over medium-high heat until shimmering. Add the beef, break it up and cook until halfway cooked through, about 2 minutes. Add the broccoli, cover, and cook, stirring every minute or so, until the broccoli is crisp tender and the beef is cooked through, about 4 minutes total.
Add the garlic, drizzle in 1 tablespoon of the tamari or soy sauce, stir to combine, and cook for 1 minute. Transfer the mixture to a large bowl; set aside. 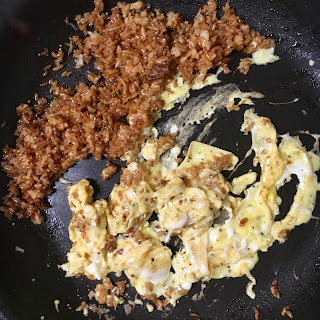 3. Add the remaining 1 tablespoon of oil to the pan over medium-high heat. Add the rice, remaining 2 tablespoons of tamari or soy sauce, and sesame oil. Season with pepper and cook, stirring occasionally, until the rice is heated through, about 4 minutes.
Push the rice to one half of the pan and add the beaten eggs to the other half. Season the eggs with salt and pepper, then stir occasionally with a rubber spatula until almost set, 1 to 2 minutes.

4. Remove the pan from the heat, add the broccoli and beef, sprinkle with the scallions, and gently fold everything together with the rubber spatula, breaking up any large pieces of egg. Taste and season with salt and pepper as needed.
Author: Monte Mathews
Filed Under: 30 Minute Dinners, American Chinese Cooking, Beef with Broccoli, Beef with Broccoli and Fried Rice, History of Chinese Cooking in America, Leftover Rice, Origins of Beef with Broccoli, Weeknight Dinners
Bobby Flay’s Salmon Burgers with Hoisin Barbecue Sauce
Fettucine with Asparagus, Peas and Alaskan Smoked Salmon