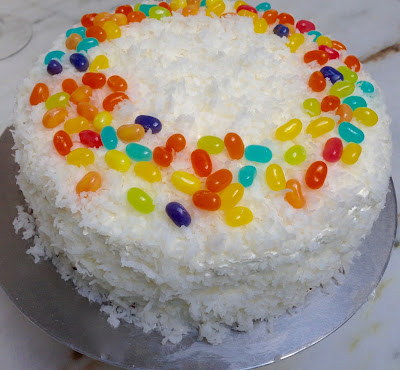 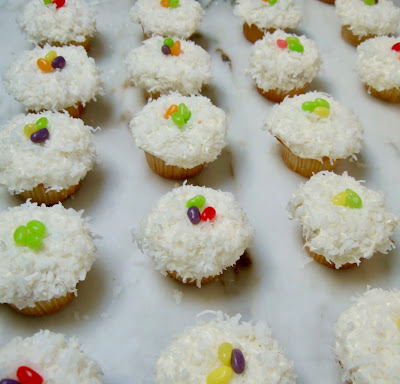 It finally feels like Spring and it’s about time.  March was a beast whose departure made us all pine for our abnormally warm February. Now that it’s April, we’re keeping our fingers crossed that Easter will usher in warmer weather for good.  And in that mood, we present two tried and true desserts decked out for Easter.  If they look familiar to Chewing the Fat regulars, it’s because they’ve appeared here before but not together. So take your pick and roll out the Coconut.  Happy Easter to one and all. 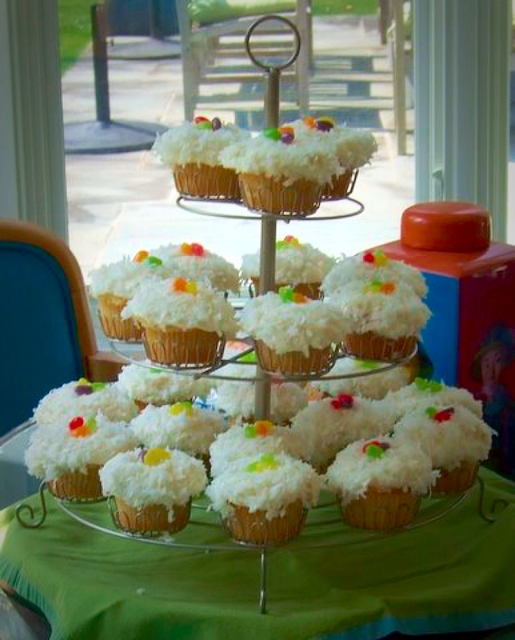 Recipe for Ina Garten’s Coconut Cupcakes
For those who observe Lent, it’s time for a little indulgence.  Andrew made this Ina Garten recipe for an Easter party last year and they were a huge hit.  But you must love coconut:  There’s coconut in the cake and coconut on top.  And I think you’ll agree, he’s really got the recipe down pat —they look just like their picture.
For the Cake:
3/4 pound (3 sticks) unsalted butter, room temperature
2 cups sugar

Preheat the oven to 325 degrees F.
1. In the bowl of an electric mixer fitted with the paddle attachment, cream the butter and sugar on high speed until light and fluffy, about 5 minutes. With the mixer on low speed, add the eggs, 1 at a time, scraping down the bowl after each addition. Add the vanilla and almond extracts and mix well.
2. In a separate bowl, sift together the flour, baking powder, baking soda, and salt. In 3 parts, alternately add the dry ingredients and the buttermilk to the batter, beginning and ending with the dry. Mix until just combined. Fold in 7 ounces of coconut.
3. Line a muffin pan with paper liners. Fill each liner to the top with batter. Bake for 25 to 35 minutes, until the tops are brown and a toothpick comes out clean. Allow to cool in the pan for 15 minutes. Remove to a baking rack and cool.
4. Meanwhile, make the frosting. In the bowl of an electric mixer fitted with the paddle attachment, on low speed, cream together the cream cheese, butter, and vanilla and almond extracts. Add the confectioners’ sugar and mix until smooth.
5. Frost the cupcakes and dip the frosted cake into the remaining coconut.
Makes 18 to 20 cupcakes. 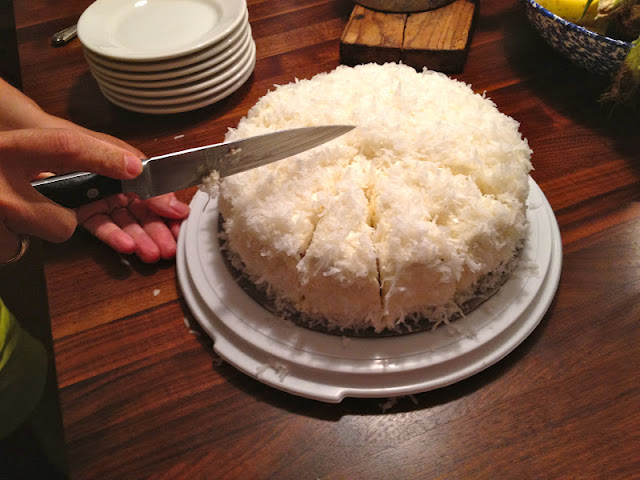 Recipe for The Coconuttiest of Coconut Cake of all time

This is a coconut lover’s dream, because it’s coconut on coconut covered with more coconut.  The result is a decadent buttery cake filled with coconut pastry cream. But it doesn’t even stop there.  Shredded coconut covers the coconut buttercream icing like a blizzard of sweetness.  It’s a three layer cake made in a single nine inch pan. It’s from John Barricelli of the SoNo Baking Company in Connecticut.

For the Coconut Pastry Cream

For the Coconut Buttercream:

5 large egg whites
1-1/3 cups sugar
Pinch of coarse salt
1 pound unsalted butter, firm but not chilled, cut into cubes
1/2 teaspoon pure vanilla extract
2 tablespoons coconut extract
2-1/2 to 3 cups shredded, sweetened coconut, for decorating.
1. Set an oven rack in the middle position. Preheat the oven to 375 degrees. Brush a 9 by 2-inch round cake pan with softened butter. Line a baking sheet with parchment paper or a nonstick silicone baking mat; set aside.
2. To make the cake: In a medium bowl, whisk together the flour and the baking powder; set aside.
3. In the bowl of a standing mixer fitted with the whisk attachment, beat the eggs whites on medium speed until frothy. With the mixer running, gradually sprinkle in the granulated sugar and beat until stiff peaks form. Scrape the meringue into a bowl; set aside.
4. Exchange the whisk for the paddle attachment. Wash and dry the bowl. Add the butter, confectioners’ sugar and salt to the mixer bowl. Beat on medium-high speed until light and fluffy, about 2 minutes, scraping down the sides of the bowl halfway through. Add the egg yolks one at a time, beating after each addition. Beat in the coconut milk, cream of coconut, and coconut extract.
5. With the mixer on low speed, add the dry ingredients, beating until the flour is absorbed. Remove the bowl from the stand and fold in the meringue.
6. Scrape the batter into the prepared cake pan. Bake on the prepared baking sheet, rotating the sheet about two-thirds of the the way through the baking time, until a tester inserted into the center of the cake comes out clean, 30 to 35 minutes. Let cool in the pan on a wire rack for 20 minutes. Then turn the cake out and let cool completely on the rack.
7. To make the pastry cream: In a medium bowl, whisk together the egg yolks, about half of the sugar, all the cornstarch, and 1/2 cup of the milk.
8. In a saucepan, combine the remaining sugar, the remaining 1-1/2 cups milk, the vanilla extract or vanilla bean, and the salt. Bring to a simmer. Whisking constantly, pour the hot milk into the egg mixture, gradually at first to temper it, and then more quickly. Set a strainer over the saucepan. Strain the custard mixture back into the saucepan and bring to a boil over medium heat, whisking constantly. Boil for 10 seconds, whisking. (Make sure the custard boils for 10 seconds in the center of the pan, not just around the sides.) The mixture should thicken to a pudding-like consistency. Discard the vanilla bean, if using.
9. Transfer the pastry cream to the bowl of a standing mixer fitted with the paddle attachment and beat on medium speed for 2 to 3 minutes, to cool slightly. Beat in the vanilla extract, if using. With the mixer running, beat in the butter a little at a time, until incorporated. Beat in the coconut. Transfer to a bowl, press plastic wrap directly over the cream to prevent a crust from forming, and chill until firm, 1 to 2 hours.
10. To make the buttercream: Bring 1 inch of water to a boil in the bottom of a double boiler. In the top of the double boiler, whisk the egg whites with the sugar and the salt over (not in) the simmering water until warm to the touch, 1 to 2 minutes (be careful to not let the bottom of the top of the double boiler touch the water). Transfer to the bowl of a standing mixer fitted with the whisk attachment and beat until stiff peaks form. With the machine running, gradually beat in the butter, piece by piece. By the time all the butter is added, the mixture will break, but it will become smooth again as you continue to beat. Beat in the vanilla and coconut extracts.
11. To assemble the cake, use a long serrated knife to trim the top of the cake, if necessary, to level it. Cut the cake into three equal layers. Set one layer on a 9-inch cake round. Scoop some of the buttercream into a pastry bag fitted with a plain tip. Pipe a line of buttercream around the edge of the cake layer to create a dam. Spread about half of the pastry cream over the cake, inside the buttercream “dam.” Set the second cake layer on top and repeat to make a buttercream dam, and spread with the remaining pastry cream. Set the third layer on top, and spread the top and sides of the cake with a crumb layer (a very thin layer of buttercream used to capture any loose crumbs, preventing them from getting into the outer frosting.)
Refrigerate the cake for 15 minutes, until the buttercream is set. Spread the cake with the remaining buttercream. Gently press the coconut all over the cake to coat completely.
Author: Monte Mathews
Filed Under: Cakes, Coconut Cake, Easter Baking, Ina Garten desserts, Ina Garten's Coconut Cupcakes, John Barricelli's Coconut Cake, John Barricelli's Coconuttiest Cake of all time
Pecan Honey Cake
Dorie Greenspan’s Rhubarb Upside-Down Brown Sugar Cake with Fresh Strawberries and Crème Fraiche