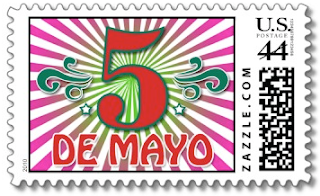 Cinco de Mayo, that most American of all Mexican Holidays, has been the subject of an annual post since Chewing the Fat began. In fact, one of the recipes I posted for Cinco de Mayo remains one of the most popular of the entire 747 posts we’ve published. It’s been viewed by over 15,000 people https://www.chewingthefat.us.com/2011/05/enchiladas-suizas-with-mexican-cole.html.  In addition to this wildly popular recipe, there’s a nice side of the history of the Cinco celebration.  This year’s brush with history takes us to Morelia, in the Mexican state of

Michoacán which is where the Carnita was invented.   Carnitas literally means ‘little meats’.  Traditionally they are made by simmering meat of a long period of time in oil or, preferably, lard. After three to four hours, the meat is tender, juicy and full of the flavor of any number of herbs and spices. Salt, chili, cumin, oregano, marjoram, thyme, bay leaves and crushed garlic cloves may be added. Once the meat is tender, the heat is turned up and the pork begins to crisp. Once crisped, it’s pulled apart by hand or fork and served in tamales, tacos, tortas and burritos.  And how do these carnitas taste?  Just about out of this world.

For a little background, Mexican cuisine is defined by what was grown in the very different climate zones of the country.  And it’s also dictated by the animals that are found in various parts of the country.   The Spanish introduced pigs to Mexico.  In a bit of irony, Morelia, home of the Carnita, was named for Juan Maria Morelos. A national hero in Mexico, he led the Mexican War of Independence. He is also a martyr as he was captured by the Spanish military, tried for treason and executed by them in 1815.  I couldn’t help feeling that Morelos would more than approve of slaughtering the Spanish imported pigs.

Traditionally, the entire pig would be boiled in a cauldron topped with lard.  Most

recipes for carnitas rely on “Boston butt” or “picnic ham” to cut down the amount of pork to make it workable.  These are of course, ‘heavily marbled’ pieces of meat. Or said another way, they’re fatty.  That’s why this recipe has been described by the Editors of Food 52, where I found it, as “the best damned pork we’ve ever eaten”.   The technique is simple. The pork belly is first marinated in spices and apple juice.  The marinade, along with some stock, becomes the braising liquid. During the four hour cooking time, all the stock eventually boils away leaving the meltingly tender pork belly to be crisped on the stove sizzling away in its own fat.
Now since Cinco de Mayo is coming up on Friday and these Carnitas would make a perfect way to celebrate, you might want to make this early in the week. Pause when you take the Pork Belly out of the oven. Reserve both the pork and the fat from the bottom of the Dutch oven.  Wait until a half hour before you want to serve it.  Reheat the meat and fat as instructed in step 5, then pull the meat apart with a fork and pile it into tacos, squeeze a little lime juice over it and top it with whatever suits your fancy including cilantro, cheese, sour cream, avocado—any traditional taco add-ons you’d like.  Food 52 recommends eating the taco “caveman-style with your bare hands”.  Why not?  Feliz Cinco de Mayo! Here is the recipe:

Recipe for Pork Belly Carnitas from Food 52 and a recipe writer named Meatified
Serves 4 Takes 5 hours, much of which is cooking time in the oven. 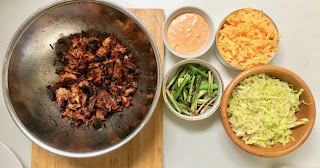 2 tablespoons garlic powder
1 1/2 teaspoon ground cinnamon
1 1/2 tablespoon cumin
4 bay leaves
2 tablespoons dried oregano leaves
2 1/2 pounds pork belly, cut into 1 1/2-inch cubes
1 tablespoon salt (reduce or omit if using stock with salt in it)
2 cups unsalted chicken or pork stock
1. In a container or large freezer bag, combine the apple or pineapple juice, garlic powder, cinnamon, cumin, bay leaves, and oregano. Add the pork belly and refrigerate while it marinates for at least 1 hour and up to overnight.
2. Remove the pork belly from the fridge an hour before cooking. 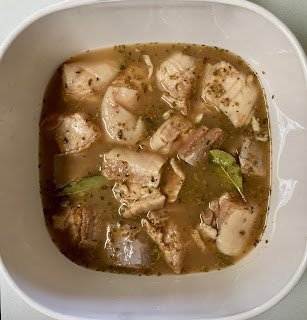 3. Preheat the oven to 350° F. Tip the marinade into a large Dutch oven and spread the pork belly pieces in a single layer in the pan. Pour over your stock. Add salt if you’re using unsalted stock. Cook for 2 hours with a lid on. 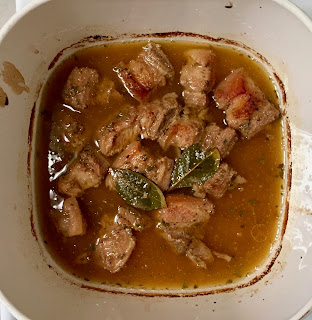 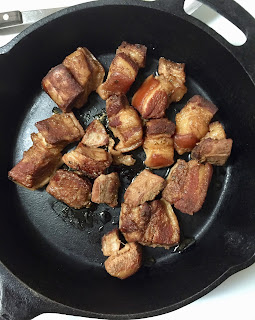 5. Transfer the pork pieces to a large, flat-bottomed skillet. Spoon off as much of the fat as you can from the Dutch oven and add it to the skillet with the pork belly pieces. Avoid any solids from the bottom of the pan, as these will burn!

6. Over medium heat, continue to cook the pork belly in its own rendered fat. The pan should be bubbling but not spitting. Flip the pork belly pieces so that they brown evenly on all sides. This should take about 30 minutes. 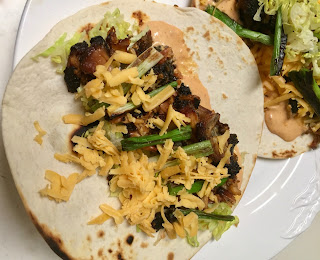 7. When all sides are brown and a little crispy, remove the pork belly from the pan and drain on some paper towels. Shred the meat with two forks and enjoy!