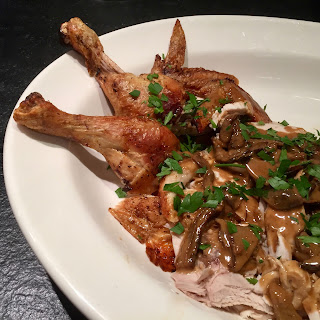 This Valentine’s Day, we bring you the Valentine’s advice of one Jonathon Reynolds.  Mr Reynolds, who wrote for talk shows helmed by David Frost and Dick Cavett, first brought the recipe to the New York Times in 2000.  It was from a beloved and romantic Greenwich Village restaurant called “La Tulipe”.
Mr. Reynolds, a bachelor, discovered that a man cooking for a woman was wildly seductive.  He never claimed to fully understand the phenomenon but he reported that “perhaps it’s the surprise, or the role reversal…or the implied altruism – he’s taking the time to whip up that bavorois just for me—but every woman I’ve asked claims that a man cooking specifically for her is an aphrodisiac.”  I’d like to point out that the Times also tested among men cooking for men and women cooking for women and it had the same effect.  So if you want to impress, make this dish and you’ll have people falling all over you. Or at least, one special person.
Then again, who doesn’t love a great roast chicken, especially if you’ve achieved that crispy brown gold perfection of skin under which hides tender-to-the-bone meat.  This version gilds what would be a remarkably good roast chicken all by itself.  It adds mushrooms and cognac to a cream sauce that makes the whole dish seem far more sophisticated than any old roast chicken.  And don’t be put off by the time this recipe takes. A good portion of it is while the chicken roasts and you and your love interest enjoy a drink or two. 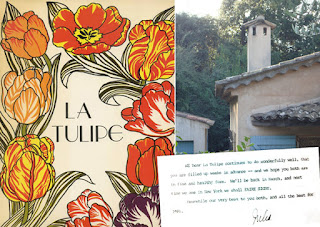 La Tulipe, the source of the original recipe, was awarded 3 stars by the New York Times for its cooking.  La Tulipe was one of those Greenwich Village restaurants that you entered by going down a few steps and into the base of a New York City Brownstone.  It was extremely small. You walked through a little bar, reminiscent of Paris, and then were ushered even further back to a cluster of tables in a chocolate colored room with pretty tulip sconces and flower arrangements, more often than not, of tulips.  A couple named John and Sally Darr owned the place and

among its many fans was Julia Child herself. John Darr ran the front of the house and Sally never emerged from the kitchen where she cooked and took her time doing it.  The waits were notoriously long.  But you were rewarded with a very romantic dinner experience until the place finally closed in 1991.

I followed the recipe almost to a T.  However, I was more than sticker-shocked when I went to buy the requested dried Morel Mushrooms. One and half ounces cost $29.95.  But take heart, I found a substitute that was just fine and we didn’t miss the morels at all.   I used dried Shiitakes, 3 .1/2 oz packages of which came to 9.49 at https://www.melissas.com/Dried-Shiitake-Mushrooms-p/599.htm.  Here is the recipe:

This take on Roast Chicken elevates the dish to new heights. With its velvety mushroom cream sauce, it's virtually irresistible