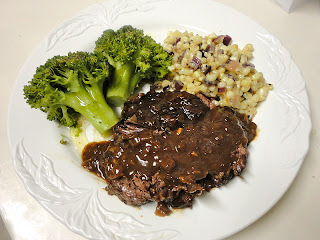 When I went to the market last weekend, there was a special on Chuck Roast with a big sticker on it saying “Easy Cooking Instructions for Pot Roast”.  I immediately thought “Lillian Hellmann’s Pot Roast”.  I don’t know whether you’re familiar with Lillian Hellman, an author whose works included “Little Foxes”, likely better remembered as a Bette Davis movie, and “Julia”, a World War II drama which may also be better remembered in its movie version starring Jane Fonda and Vanessa Redgrave.  But I remember Lillian Hellman well.
When I was in Grad School, I used to say I majored in Dick Cavett.  The talk show host’s morning show was an every day ritual. I had so few class hours, I had plenty of time to watch hours of TV.  Lillian Hellman was a fixture on his show.  She’d appear in a cloud of cigarette smoke and chain-smoke her way through every appearance.  Judging from her photos, she was never a great beauty.  But by the time I saw her she had aged badly.  She was so wrinkled she looked like a Shar Pei.  Her longtime companion had been the mystery writer Dashiell Hammett who wrote “The Thin Man” series and supposedly modeled the character of Nora Charleston after Miss Hellmann.  That was almost impossible to believe.  Myrna Loy, a great beauty and wit portrayed Nora in the movies. She was nothing like Miss Hellmann.  But from what I understand, Mr. Hammett had a rather severe alcohol problem so he may not have noticed. And as Gore Vidal once joked of their decades-long affair, “Did anyone ever see them together?”.
Miss Hellmann’s appearances with Dick Cavett often degenerated into rants about her various enemies who were numerous and equally nasty about her. Most notorious of these was the author Mary McCarthy who’d written “The Group”, a thinly veiled look at her class at Vassar College also probably best remembered for its movie version, which marked the film debut of Carrie Nye, who was Mrs. Dick Cavett.
Ms. McCarthy had famously said of Ms. Hellmann, also on a Dick Cavett program, that “every word she writes is a lie, including ‘and’ and ‘the’.” Hellman’s retort was to file a $2,500,000. slander suit against McCarthy, Dick Cavett, and PBS.  McCarthy defended herself by producing evidence that Lillian had in fact shaded the truth on some accounts of her life.  Well, actually all of her life.  “Julia”, which Ms. Hellmann claimed was a part of her life story, was purloined from a fellow client of her attorney named Muriel Gardiner. Miss Hellmann, it turns out, was a pathological liar. 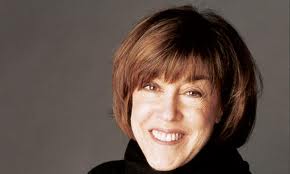 So what is the Pot Roast connection, you might ask?  I got the recipe from Nora Ephron, who practically made a cottage industry out of Lillian Hellmann material. Ms Ephron met Miss Hellmann when she interviewed her for Esquire magazine when the latter was 68 years old. Ms. Ephron describes herself as “besotted” with the older writer when they met.  The two exchanged recipes and dinner party invitations.  But Miss Hellmann eventually exhausted Miss Ephron (which, by the way, is what they called each other) with her phenomenal gift for dishonesty.  And the two severed ties. But clearly she was still top-of-mind when Ms. Ephron wove the recipe for “Lillian Hellmann’s Pot Roast” into her autobiographical novel “Heartburn” (1983). Then in 2002, Ms. Ephron wrote an entire play, “Imaginary Friends” which revolved completely around the Hellmann McCarthy feud. Finally, in last year’s wonderful “I Remember Nothing”(2010) Ms. Ephron revisited Miss Hellmann again. Stay tuned. 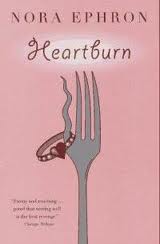 It was “Heartburn”, a thinly-veiled account of Ms. Ephron’s failed marriage to Carl Bernstein of Watergate fame where I first encountered the Pot Roast recipe.  Ms. Ephron’s stand-in in the book was a food writer.  And so Lillian Hellmann’s Pot Roast came into my life when I read the book and it’s been there ever since.
The recipe is just this side of white trash.  It involves a can of Campbell’s Cream of Mushroom soup, a package of Lipton Onion Soup Mix. Then you use the soup can as a measuring cup for the wine and water that you add to the recipe.  No browning is mentioned.  You are supposed to toss everything into a pot and cook it for a very long time in the oven.  But Ms. Ephron’s writings started making me very leery of whether Miss Hellmann had actually ‘invented’ the recipe.  So I checked. First I wondered about the Lipton Soup Mix. Turns out Miss Hellmann could easily have had access to that.  It was introduced in 1952 and was wildly popular for making onion dip with sour cream.  Then I wondered about the Cream of Mushroom soup. I have perhaps 45 “community cookbooks” ranging from Atlanta’s Pet Recipes (from the Humane Society) to “Talk About Good” (from the Junior League of Lafayette, Louisiana) and in every single one an enormous number of recipes rely on Campbell’s Cream of Mushroom’s participation.  I had to believe Lillian could have been exposed to this ingredient. 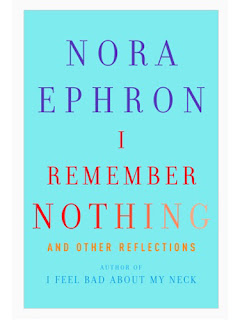 As I sat in my kitchen with a powerful storm shaking every tree out side, the Pot Roast, which I did brown, sat in the oven.  Every hour, I’d take it out and turn the roast over in the beautiful, rich brown gravy. In between, I started re-reading the Lillian Hellmann chapter in “I Remember Nothing”.    The kitchen was filled with aroma of sweet onions and beef and herbs.  Doing this for 3 ½ hours, only built the anticipation for the flavor of this increasingly aromatic dish.  Finally, I got the Pot Roast ready for its trip back into Manhattan.  I came to the denouement of the Ephron-Hellmann friendship.  Ms. Ephron wrote: “The younger woman finds out the older woman is only human: the story ends.  If the younger woman is a writer, she eventually writes something about the older woman. And then years pass. And she herself gets older.  And there are moments when she would like to apologize–at least for the way it ended. And this may be one of them.” *   And I thought to myself Lillian Hellmann may have been one horrible old liar but she sure knew her way around a Pot Roast.  Here’s the recipe:
*Copywright Nora Ephron 2010
Lillian Hellmann’s Pot Roast
1 4-pound piece of beef
1 can cream of mushroom soup
1 envelope dried onion soup mix
1 large onion, chopped
3 cloves garlic, chopped
1 can red wine
1 can water
1 bay leaf
1 teaspoon dried thyme (or 2 teaspoons fresh)
1 teaspoon dried basil (or 2 teaspoons fresh)
1.   Ephron tells you to put all her basic ingredients in a large “good” pot and bake them at 350 until the meat is tender, “3-1/2 hours or so.”  I insist that browning the pot roast in a large Dutch oven makes for a better end result in both color and taste. 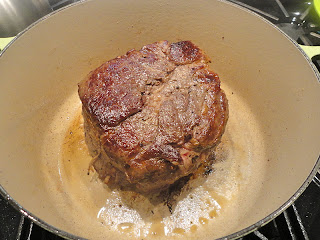 2.   Brown the beef on all sides on the stove top. When it is well-browned,  add the soup mix, the canned soup, the wine, water, onion, garlic, bay leaf, thyme and basil. Cover and put in the oven and set the timer for 1 hour. 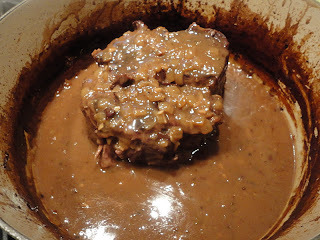 3.    I like to take the meat out and turn it over every hour until it is done at the 3 ½ hour mark.
4.   Serves 8. This is even better made one day and reheated the next.
Author: Monte Mathews
Filed Under: Beef Dishes, Carrie Nye, Dick Cavett, Lillian Hellmann, Nora Ephron, Pot Roast
Peruvian Steak and Potato Stir-Fry Or Lomo Saltado
To Montreal again and to Iron Chef Chuck Hughes’ newest hit “Le Bremner” plus his incredible recipe for Beef Short Ribs with Cambozola