I love Melissa Clark and not only because she has the 5th most popular post on Chewing the Fat…see            https://www.chewingthefat.us.com/2011/05/melissa-clarks-mothers-recipe-for-thyme.html).  She consistently creates truly accessible recipes for readers of her  New York Times weekly column “In the Kitchen with a Good Appetite”.  And I love her because she shares my passion for dark meat chicken.  She adores the thigh for its flavor but, according to this recipe, her true love is the drumstick.  She is a huge fan of how easily drumsticks brown and how juicy they are.  And she’s advocate of cooking one chicken part per dish when she can.  Chicken is notorious for cooking unevenly which explains why dried out breasts are often accompanied by undercooked thighs.  When you confine yourself to one chicken part, you largely eliminate that possibility. And if you, like me, are a Costco shopper, you’re likely buying packages of various chicken  parts including those containing 5 lovely drumsticks 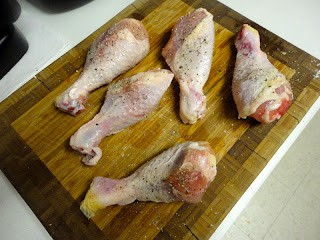 Now I confess to having wondered what to make with my drumsticks. There are many recipes for thighs and lord knows we have to practically beat off boneless skinless chicken breast recipes.  But unlike the humble wing, which provided 1.25 billion of themselves for Super Bowl Sunday this year alone, the drumstick has always puzzled me.  Until this recipe.  Nothing could be simpler:  You brown the chicken after having given it a healthy shot of salt and pepper.  Then you make the simplest of all pan sauces, return the drumsticks to the sauce and voila!  With 20 minutes effort and another 25 watching them cook, you’ve got a splendid weeknight dinner, full of flavor and a perfect match for some fresh vegetables like the mélange of carrots and snap peas you see on our plate.  The original recipe calls for Crème Fraiche but feel free to dip into the sour cream instead. It’s a perfectly reasonable substitute and far less expensive.  Here’s to Melissa!  And here’s her recipe from Food and Wine.
Recipe for Melissa Clark’s Chicken Dijon
1 teaspoon coriander seeds
2 tablespoons extra-virgin olive oil
8 medium chicken drumsticks (about 3 pounds)
Salt and freshly ground pepper
1/4 cup finely chopped onion
4 garlic cloves, minced
1 1/2 cups low-sodium chicken broth
2 tablespoons whole-grain mustard
3 tablespoons crème fraîche or sour cream
2 teaspoons chopped tarragon
Crusty bread, for serving
1.   In a large skillet, toast the coriander seeds over moderately high heat until fragrant, about 2 minutes. Transfer the seeds to a mortar and let cool. Crush the seeds coarsely with a pestle. 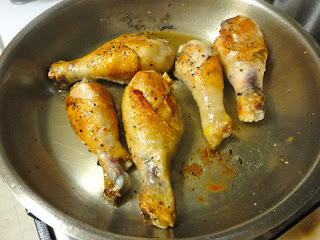 2.   In the same skillet, heat the olive oil until shimmering. Season the chicken drumsticks with salt and pepper, add them to the skillet and cook over moderately high heat, turning, until golden brown all over, about 10 minutes. Add the onion and cook, stirring occasionally, until softened, about 3 minutes. Add the garlic and cook for 1 minute. Add the broth and crushed coriander and bring to a boil. Cover and cook over moderately low heat until the chicken is cooked through, about 15 minutes. 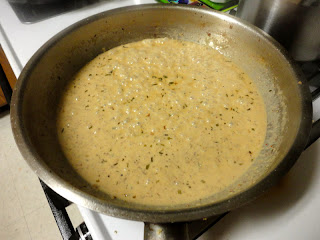 3.   Transfer the chicken to a platter, cover and keep warm. In a small bowl, whisk the mustard with the crème fraîche and tarragon. Whisk the mixture into the skillet and simmer the sauce over moderate heat until thickened, about 5 minutes. Return the chicken to the skillet and turn to coat. Serve the chicken with crusty bread.
MAKE AHEAD The stew can be refrigerated for up to 3 days.
Author: Monte Mathews
Filed Under: Chicken, Chicken Drumsticks, Food and Wine, Melissa Clark's Chicken Dijon, Weeknight Dinners
Ottolenghi’s Salmon Steaks with Spicy Tomato Sauce
Herb Roasted Lamb Chops with Aparagus And a Baked Potato