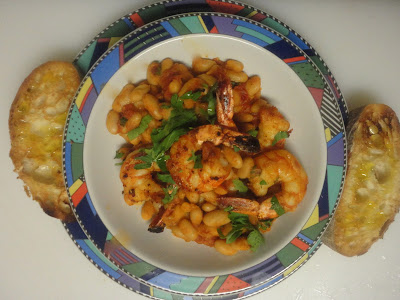 This is a one-pan wonder that comes together completely in just 30 minutes.  And in that time, Cannellini beans take on the rich flavor of a tomato sauce enriched with chiles and a single bay leaf.  There’s nothing bland about these beans! Then they’re topped with big beautiful shrimp that have been tossed in garlic and smoked paprika and broiled for 3 minutes.  Grilled bread that’s been rubbed with more garlic is perfect for sopping up the lusciously thick sauce.  The whole dish is an homage to Spanish cooking that couldn’t be simpler to make and yet complex in flavor at the same time. Make it and I can almost guarantee you will make it again and again. 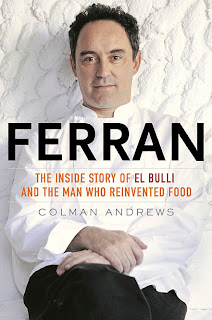 My experience with Spanish cuisine is limited to making an occasional Paella and even there, without a true Paella pan, I am not sure how authentic my version is.  But I’ve wanted to delve a little deeper ever since I read “Ferran ” (Gotham Books 2011) Colman Andrew’s biography of Ferran Adrià i Acosta who is, arguably, the best chef in the world. And who wouldn’t be intrigued by a subhead  that read “The Inside Story of El Bulli and the Man who Re-invented Food”. From his out-of-the-way El Bulli restaurant in Roses on the Costa Brava, the chef has drawn gastronomes from every corner of the world.   Now shuttered while he decides what his next step will be, the chef’s most famous contributions to cuisine will never be the province of the home cook.  Adria is most associated with “molecular gastronomy”, which is that particular style of cooking obsessed with its science and how food is chemically changed during
the cooking process.  Despite his reputation for being one of its foremost practitioners, the Chef himself doesn’t consider his cooking to fit in that category.  Instead, he is quoted as saying that his goal is “to provide unexpected contrasts of flavour, temperature and texture. Nothing is what it    seems. The idea is to provoke, surprise and delight the diner.”  I won’t, for one minute, claim that this incredibly simple Garlic Shrimp with White Beans comes anywhere near the complexity of a Ferran dish.  But I think you will agree that this thirty minute entrée will “provoke, surprise and delight” you.


To make it, I relied once again on Shrimp from Costco.  While the original recipe, developed in the Bon Appetit test kitchen, suggested medium shrimp, Andrew and I both agreed that the larger 11-15 count shrimp make this much more substantial. You get real shrimp flavor in every bite.  I can’t tell you how many places I’ve looked for Smoked Paprika.  For the longest time, I have had to go to Pensky’s to find a tiny jar of the stuff for oodles of money.  So you can imagine how pleased I was to see that Trader Joe’s is now carrying full-sized jars of Smoked Paprika for just  $1.99.  While I wouldn’t discourage you from making this with ordinary and much-easier-to-find Sweet Paprika, I would go out of my way to use the Smoked variety.  You may associate Paprika with Hungarian cooking. The truth is Paprika has only been used in Hungary in the last hundred years. But in Spain, its use goes back to the 1500s when it was brought back by the Conquistadors from the Americas.  Paprika is made from bell peppers or a mix of bell peppers and chili peppers.  In Spain, Paprika is called “Pimenton” and you may find it by that name in specialty stores. I found in the Gourmet Section of HomeGoods!  Spanish Paprika is dried by using smoke, most often the smoke from oak wood, which gives it a distinctive smoky flavor that’s lacking in the Hungarian version.  So leave that for Paprikash or Goulash and take a trip to Spain for dinner tonight. And unless you are a very light eater, this recipe, which Bon Appetit said was for 4, was dinner for two at our house.  Here’s the recipe: