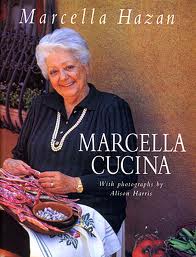 Marcella Hazan just celebrated her 89th Birthday.  As a salute to this great lady, a Facebook friend of mine who has taken the time to answer many Italian food questions for me, I wanted to celebrate too. Fortunately, March 2013’s Food and Wine Magazine saluted its own 35th Anniversary with “The Legends”, a collection of recipes from “the extraordinary, epoch-defining cooks” who’ve been their contributors for the past 35 years.  Julia Child, Jean-Georges Vongerichten, Jacques Pepin, Paula Wolfert and Marcella herself all came to life on their pages.  It must have been quite a task to decide what went in and what didn’t, especially since Ms. Hazan has had 27 recipes published in Food and Wine.  The Editors settled on just 3 recipes, all from “Marcella Cucina” (Alfred A. Knopf 1997).  I settled on Pasta with Abruzzi-Style Lamb Sauce.  But don’t think I won’t be back with “Fish in Crazy Water” sometime soon.

At heart, Marcella Hazan is a great home cook.  She’s never owned a restaurant.  She is basically self-taught and in fact knew nothing about cooking at all until she met the love of her life, Victor Hazan, an Italian-born New Yorker who was studying in Italy.  She owes her knowledge to Italy’s great catalogue of cookbooks and her practical skills to time spent in the kitchen.  When the couple moved to New York, she opened a cooking school in her apartment.  Craig Claiborne adored her, published her recipes in the New York Times and boosted her reputation as an authority on Italian cooking.   This recipe is quintessential Hazan. It is simplicity itself to make and full of deep, intense flavor.  The lamb is not ground but rather diced into ½ inch or smaller pieces.  And considering that most Italian meat sauces are all day affairs, this one stands out because it takes all over 50 minutes to make, start to finish.  It’s an easy pasta sauce to make on a weeknight.  If you make more than you can serve at one meal, it only gets better with time. You can use any kind of tubular pasta here—penne, ziti,  rigatoni. And what makes the sauce “Abruzzi-Style”? 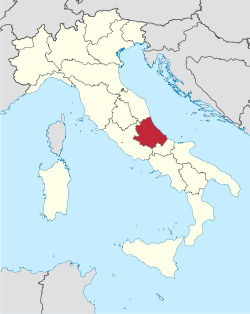 The Abruzzo region is in the center of Italy on the Adriatic Coast, on the opposite side of Lazio, the province that is home to Rome.  Once you get away from the fishing hamlets on the coast, the region is wild and craggy and includes one of the highest mountains in Italy:  The Gran Sasso tops off at 9500 feet.  There is pasture land in these highlands.  For hundreds of years, shepherds lived in this barren landscape with their flocks of sheep for most of the year.   The lamb in this recipe shows its Abruzzo roots but it’s also the frugal and simple peasant-food quality of the dish that makes it Abruzzese.  The word ‘frugal’ also

applies here: I was able to use Shoulder Lamb Chops which is likely the least expensive lamb you can buy.  Food and Wine said you could use another cut of lamb “as long as it’s not too lean”.   This dish has robust character that’s perfect for one of those nights when only a bowl of pasta can satisfy.  Here’s the recipe, with a minor adaptation. I used 2 ounces of cubed pancetta in lieu of Marcella’s finely chopped and thinly sliced version.  Here’s the recipe: 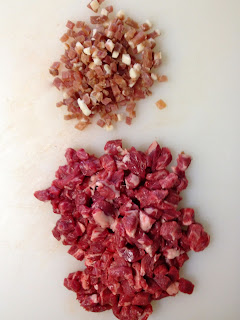 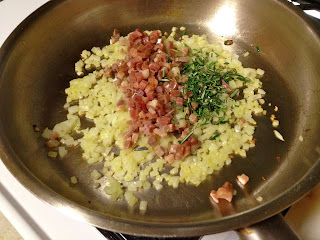 Put the oil and onion in a large skillet and cook over moderately high heat, stirring frequently, until the onion is pale gold. Add the pancetta and rosemary and cook, stirring occasionally, until the pancetta fat is rendered; the pancetta should remain soft.
Add the lamb and cook until browned, 5 minutes. Season with salt and pepper and stir. Add the wine and simmer until evaporated, 10 minutes. Add the tomatoes and simmer gently, stirring from time to time, until the fat begins to separate from the sauce, 15 minutes.
Meanwhile, fill a large pot with 4 quarts of water and bring to a boil. Add 1 1/2 tablespoons of coarse salt, cover and return to a boil.
Add the pasta to the pot and stir rapidly with a wooden spoon. Cover and bring back to a boil. Uncover and cook the pasta, stirring frequently, until it is al dente. 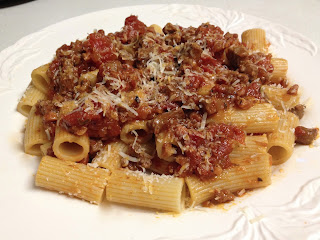