To say that I’m a fan of our local Long Island asparagus is the definition of an understatement.  I really cannot get enough of the stuff.  It’s a fixture in our refrigerator for as long as it lasts.  The asparagus I am particularly attached to is grown at Tom Falkowski’s farm which is right over the hill from our house.  This year, the ground was still frozen well into April so the asparagus was late in coming to the Falkowski’s farm stand, Country Garden.  But now that it’s there and not likely to remain nearly as long as I’d like, I’ve taken every advantage of it.  I’ve sought recipes that use it differently from the twelve other asparagus recipes I’ve blogged about before.  So if, by any chance, today’s offerings don’t please your palate, please feel free to use the Search function on the left side of the page and peruse to your hearts content.   But if you stay here, I’ll show you how to put a Spanish take on the vegetable and making it a hearty breakfast or brunch option or even a breakfast-for-dinner option, how to transform it into a dinner curry and finally I’ll show you Tyler Florence’s cooking technique that puts the stalks in a paper bag and cooks then perfectly in the oven. So here goes:

A ‘revuelto’, David Tanis explained in a recent New York Times article in his “City Kitchen” column, is a cousin of a frittata, a simple scrambled egg dish that Spaniards make with cooked vegetables—mushrooms, artichokes, zucchini—but which, in Spring, is most likely to contain wild asparagus. To this, Chef Tanis added chorizo bringing even more Spain to the table. I settled for the domesticated version of asparagus and mostly because I had it on hand, some slab bacon cut into ½ cubes in lieu of the chorizo.  I am sure you could substitute any kind of relatively spicy chicken sausage as well.  The ingredient that also makes this lovely cream-y egg-y dish Spanish is the use of smoked Paprika, which is now so widely available you can find it at Trader Joe’s.   And of course, you can up the Spanish ante by using Spanish Olive Oil which is fruitier than it’s Italian or Greek cousins which tend to be more pepper-y.  Whatever you use, this is an easy recipe whose only drawback is that I wish it photographed better—even the New York Times decided to leave it in the pan so it looked more appealing.  Here is the recipe. This is for four people. I halved the recipe for the two of us without any difficulty at all. 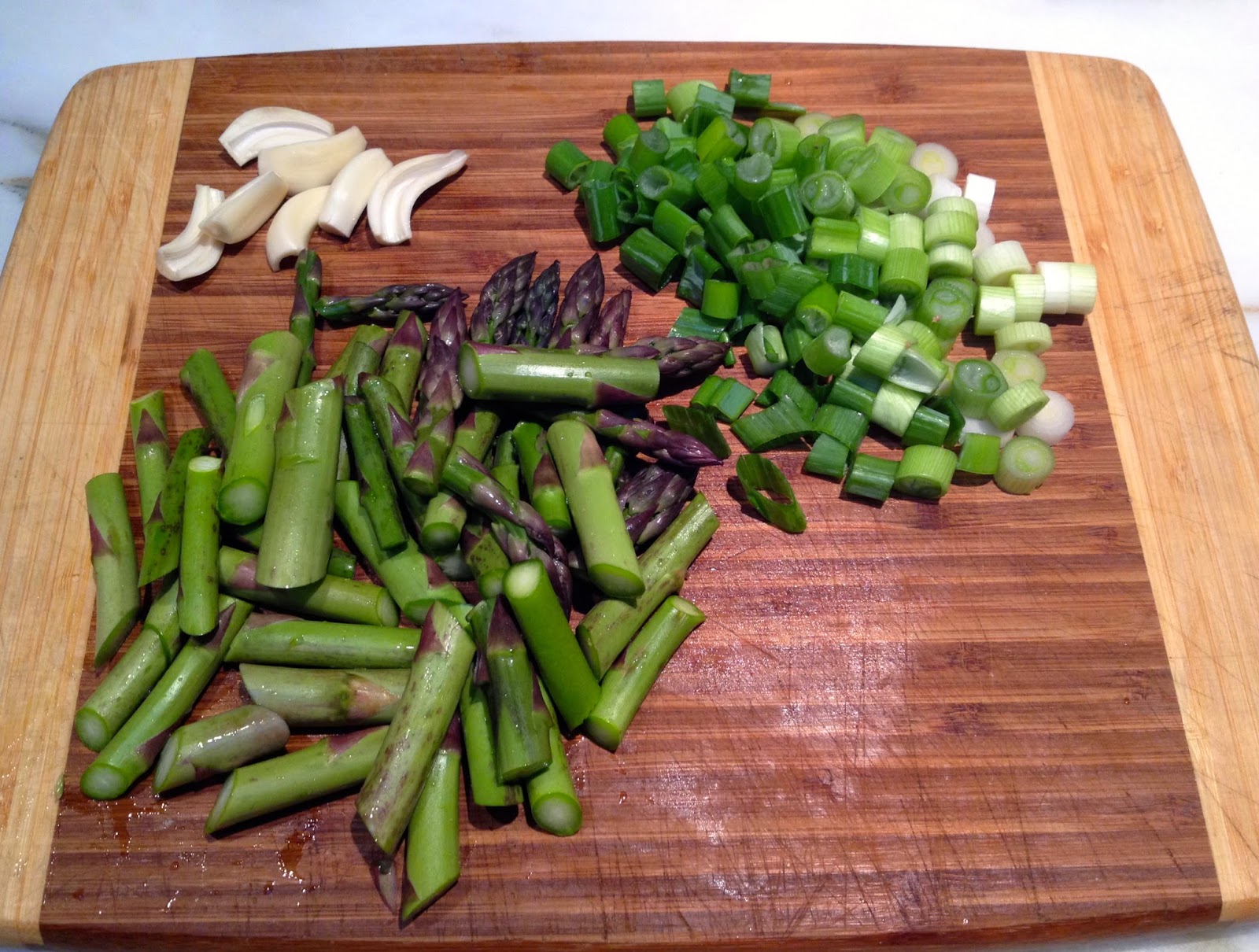 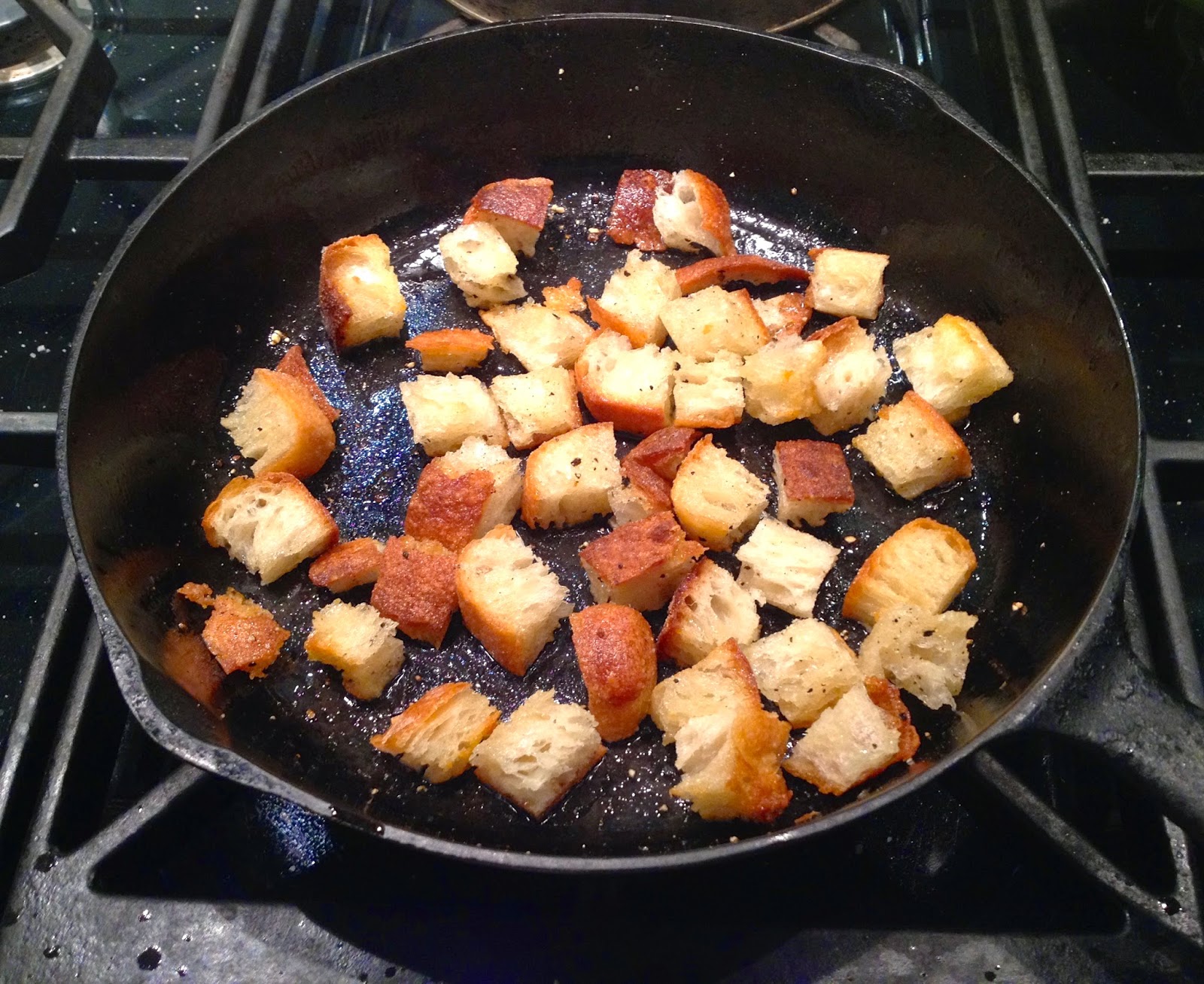 1. Put 3 tablespoons olive oil in a cast-iron skillet over medium-high heat. Add peeled garlic cloves and let them sizzle until lightly browned, then remove. Add bread cubes, season with salt and pepper, lower heat to medium and gently fry until lightly browned and crisp, about 2 minutes. Remove bread and set aside to cool. 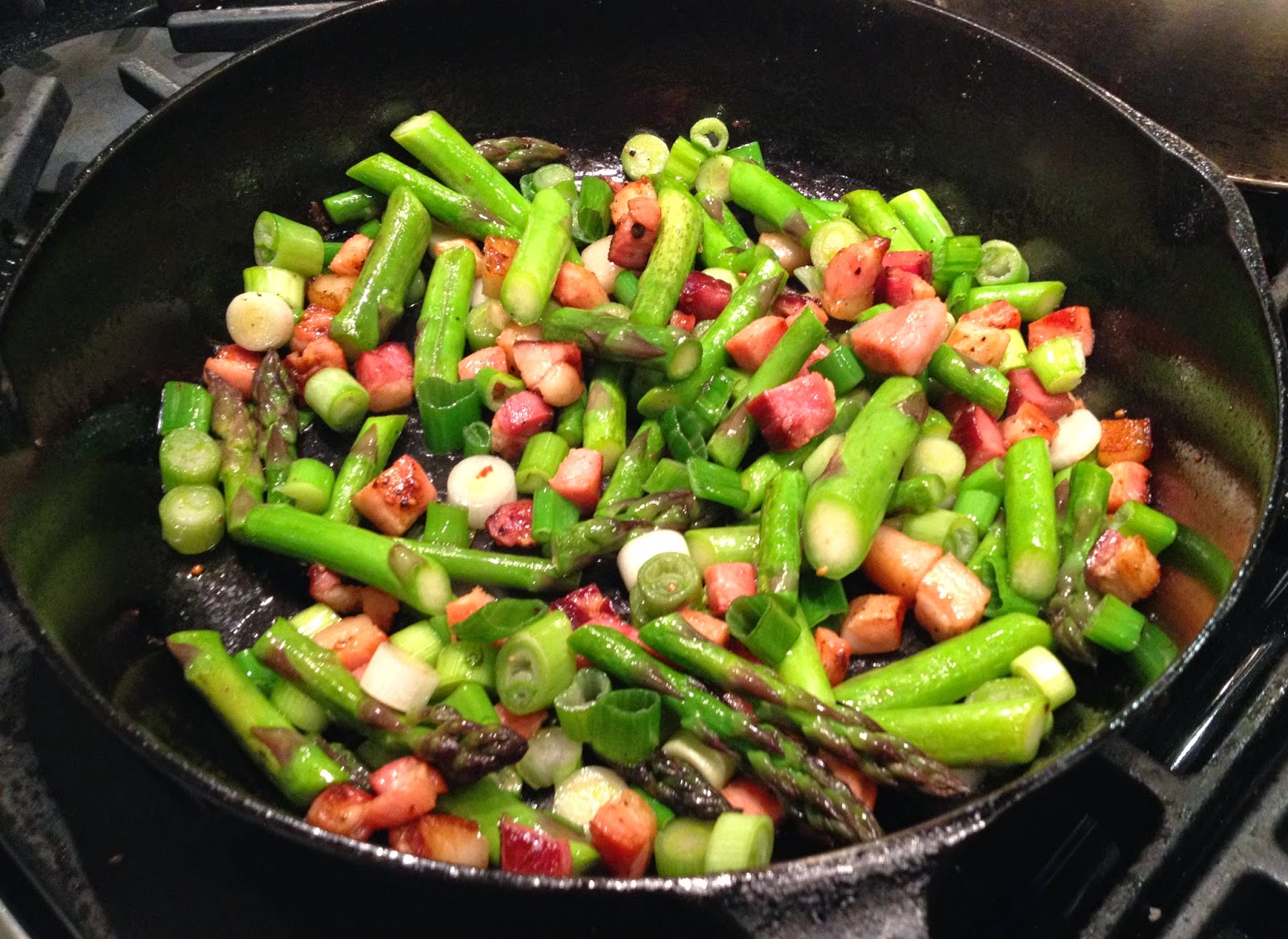 2. Add chorizo or bacon or chicken sausage and fry lightly. Add asparagus, season with salt and pepper, and stir-fry until cooked through but firm, 3 to 4 minutes. Add green onions and minced garlic and cook 1 minute more. 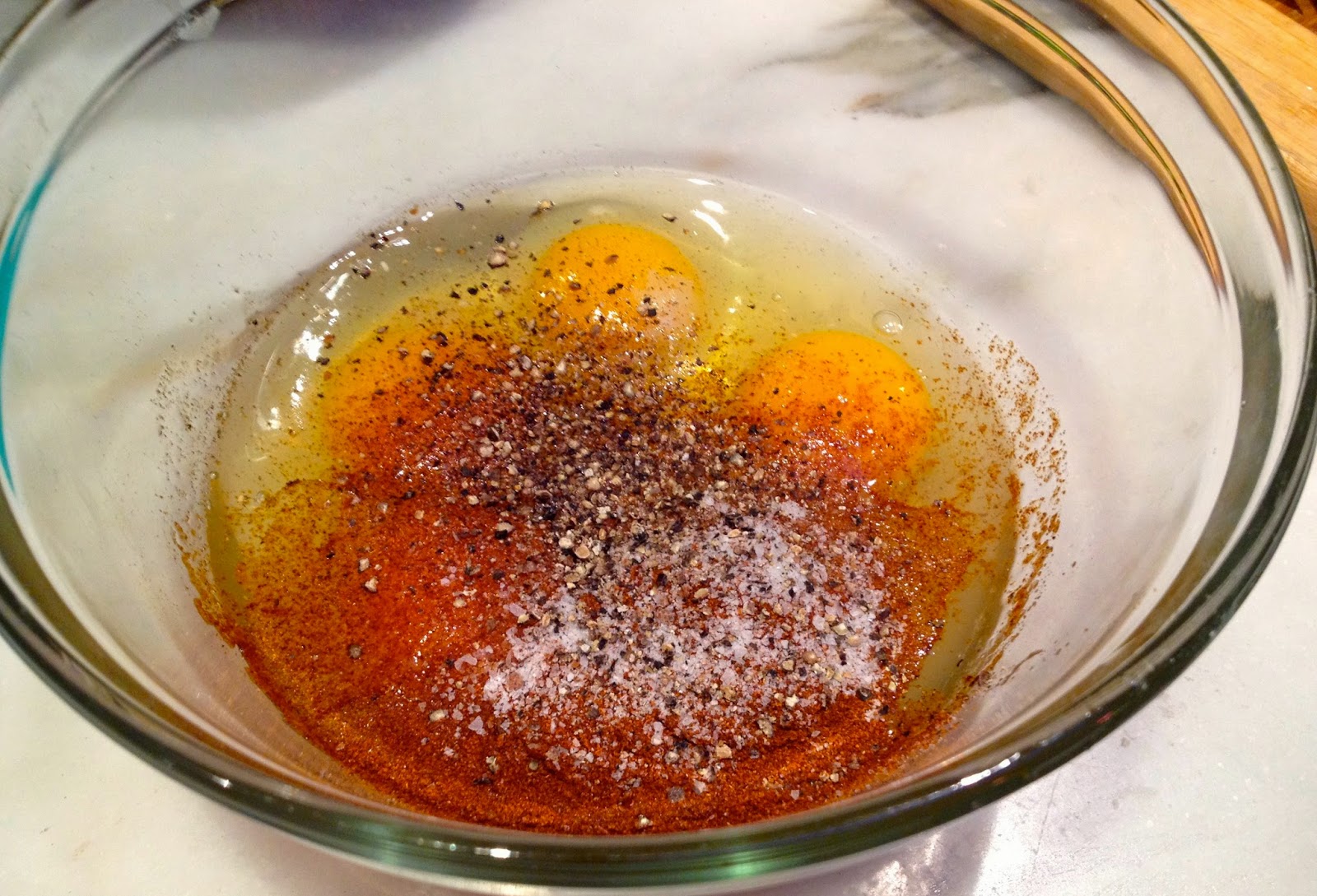 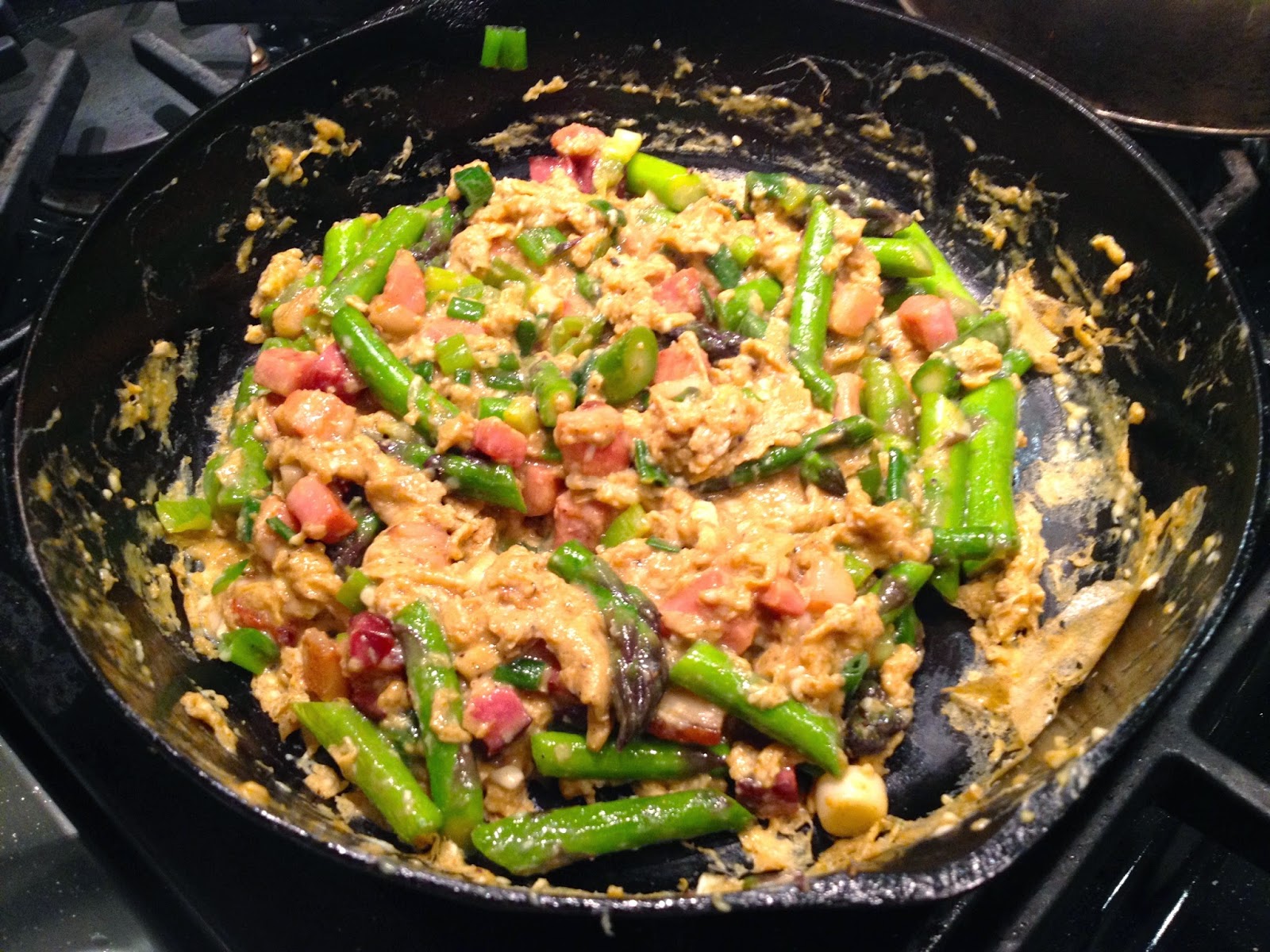 4. Pour into pan and cook, stirring with a wooden spoon, just until soft and creamy, 2 to 3 minutes. Add parsley and serve immediately, topped with the fried bread cubes.
For Dinner in under 30 minutes: Penang Curry with Chicken, Asparagus and Mushrooms 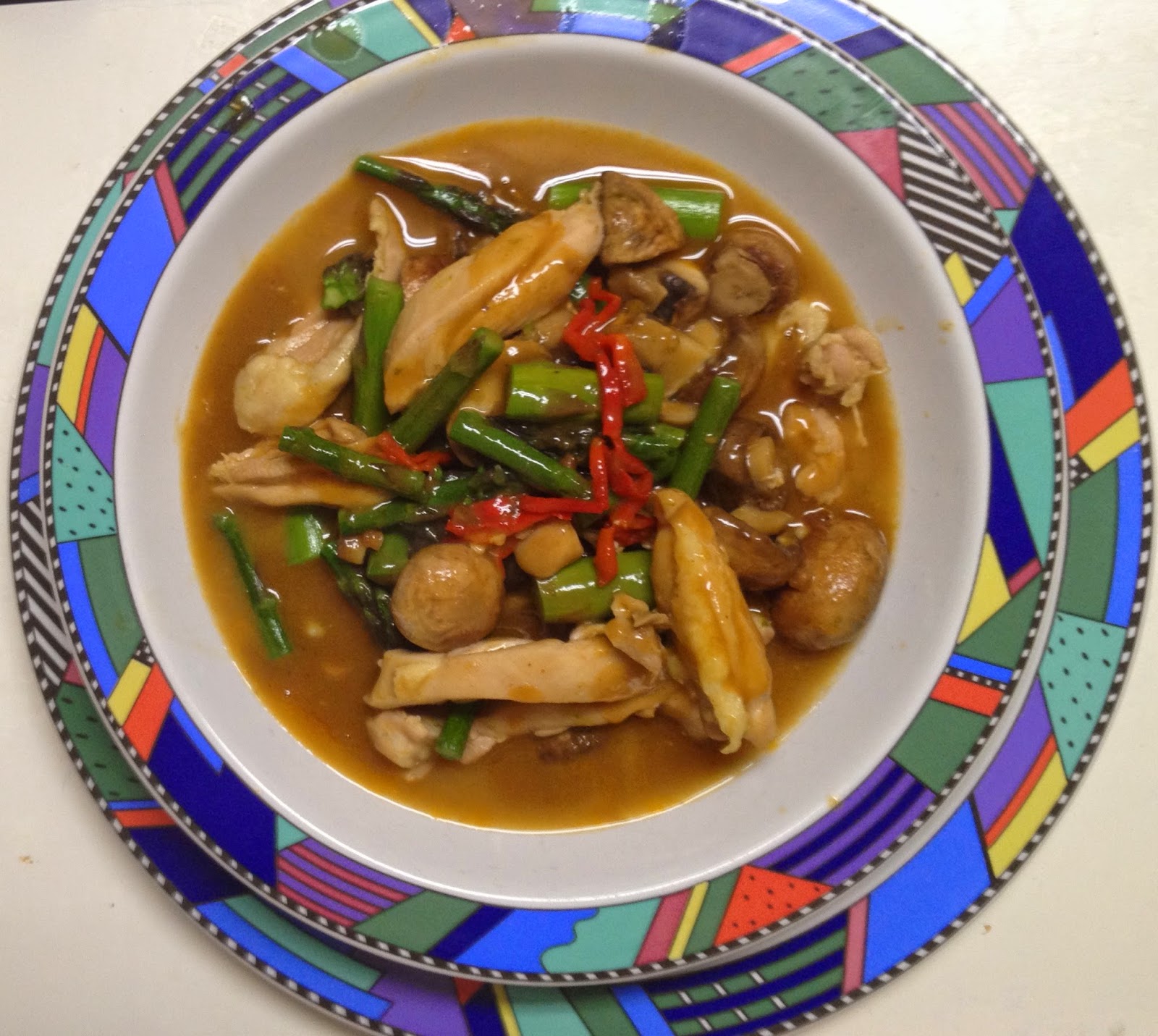 There are plenty of ways to incorporate asparagus in to a main course so that it’s an integral part of the recipe and not just the beautiful side dish it generally is.   In my search for something different, I came across a quick curry that did just that.  Now curry may not sound like Spring to you but in Malaysia, where this curry hails from and where the seasonal changes come and go with very little change in temperature, curry is a ‘year round staple.  The theory is that hot, spicy foods stimulate the circulation and raise the body temperature.   The rise in body temperature is then supposed to make you feel cooler by diminishing the difference between you and the surrounding air.  At the moment, I can’t see any real need to cool off as we’re barely warming up—at least on the East Coast.  In fact, there are still nights when you might appreciate a little heat.   The recipe for Penang Curry with Chicken, Asparagus and Mushrooms from Fine Cooking Magazine calls for, need I tell you, Penang Curry.  It also called for a half dozen frozen lime leaves!  While I live in a neighborhood where just about anything you can put in your mouth is sold, neither Penang Curry nor frozen lime leaves were not to be found.  However, it was easy to create this peanut-laced concoction substituting red curry paste mixed with some crunch peanut butter.   As to the lime leaves, lime zest made a perfect substitute.  The other foundation here is Coconut milk. I opted for the low calorie or “Lite” version which is more liquid-y and really needs to cook down a bit.  Finally, I would serve this on rice which will sop up the wonderfully complex sauce and absorb some of the heat.  Here is the recipe:

Recipe for Penang Curry with Chicken, Asparagus and Mushrooms from Fine Cooking Magazine
Serves 4.  (Although I made the dish and served 2) Takes under 30 minutes. 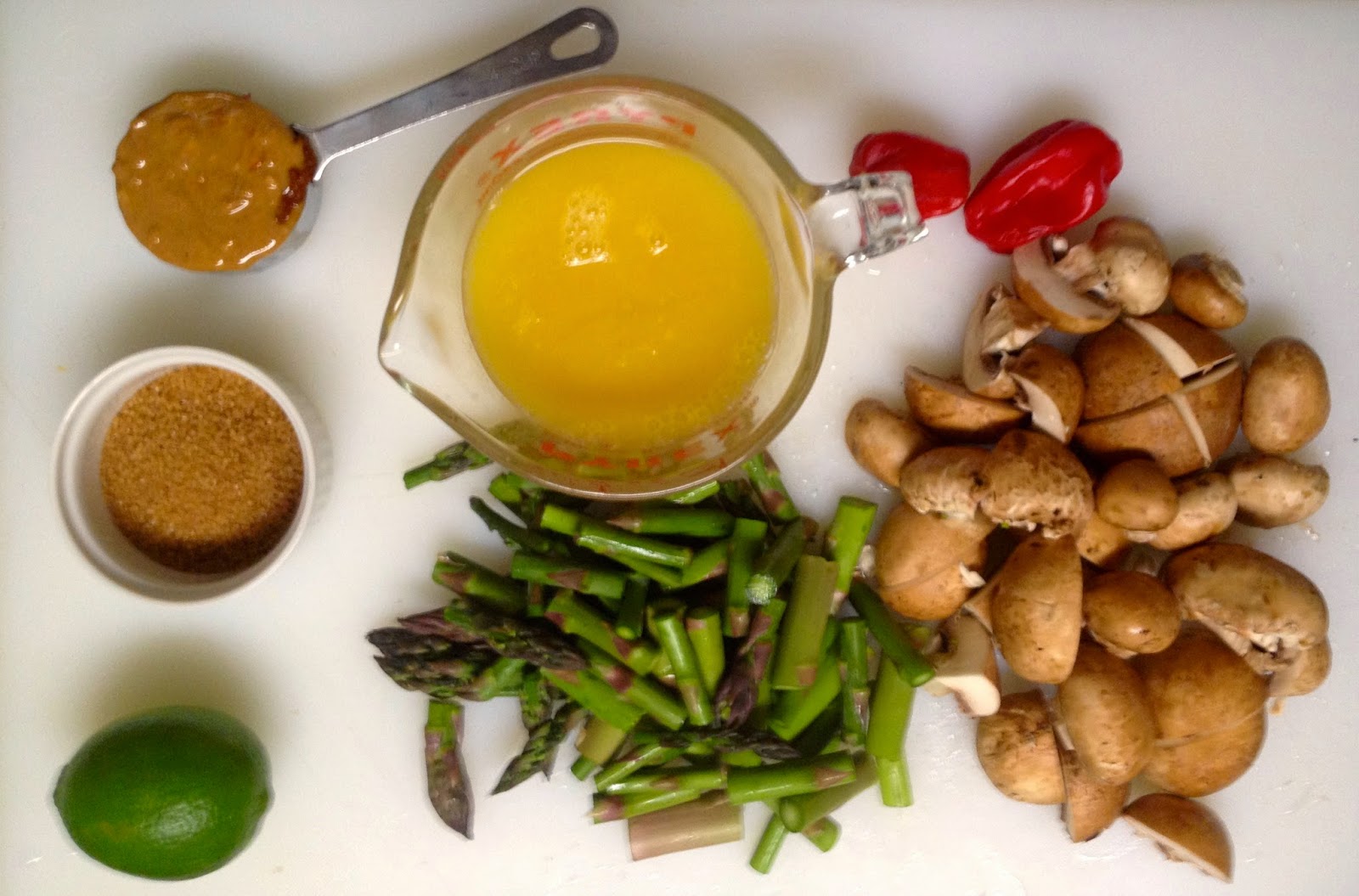 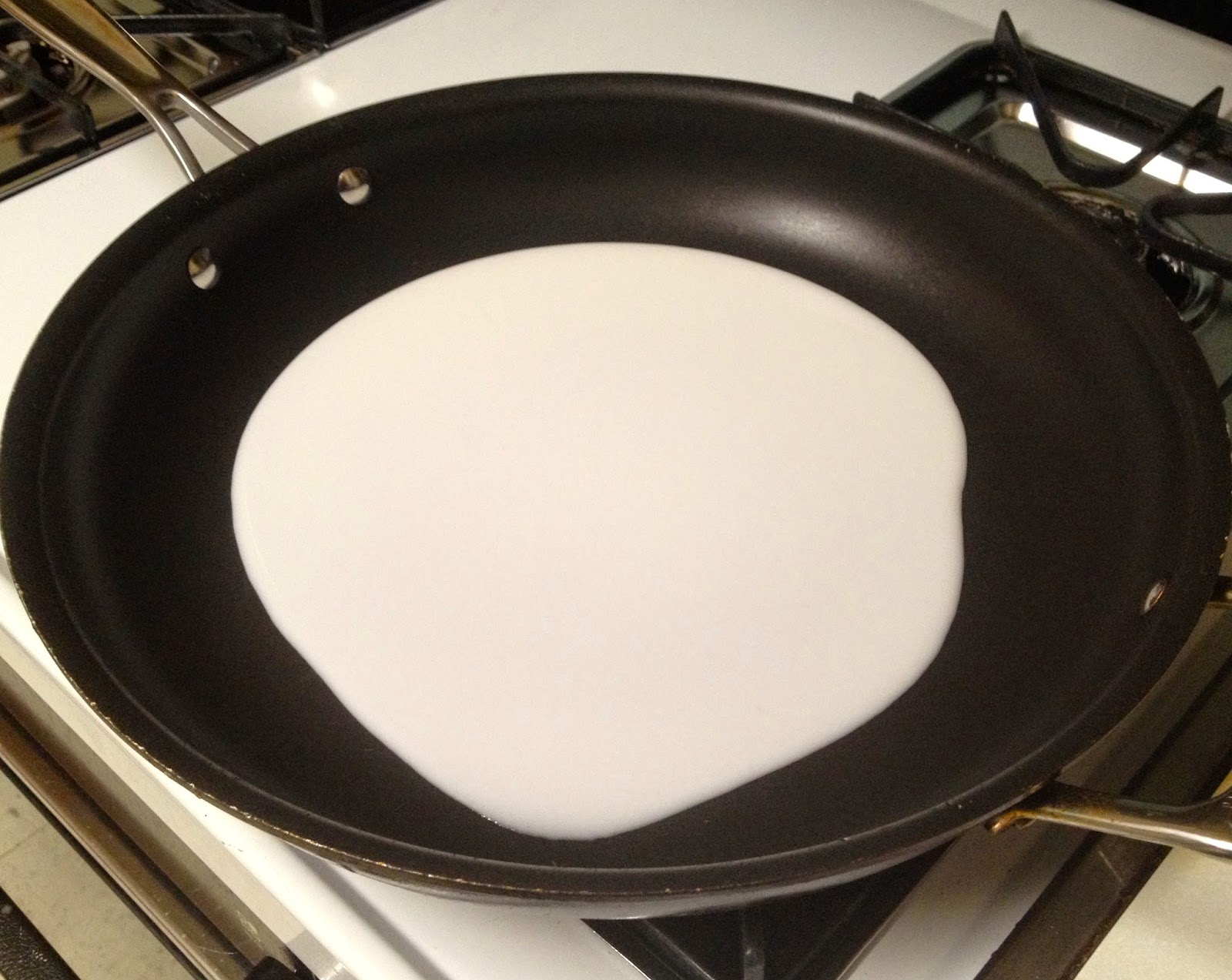 1. Shake the can of coconut milk or stir it well (this creates a consistent thickness, since the fat often solidifies at the top of the can).  In a 3- to 4-quart saucepan or wok over medium heat, simmer 1/2 cup of the coconut milk, stirring occasionally, until reduced by about half, 3 to 5 minutes. It will get very thick and shiny and may or may not separate; either is fine. 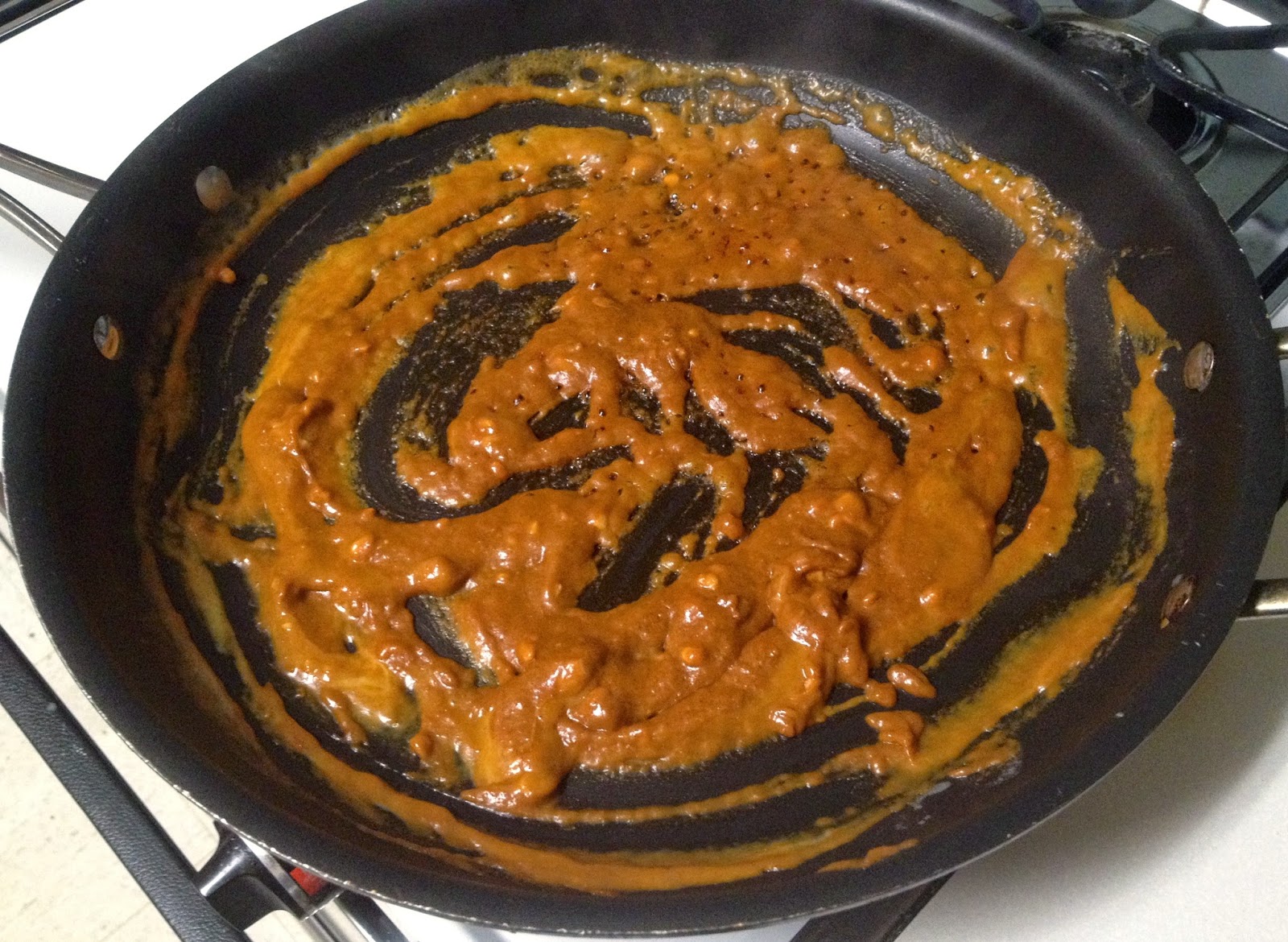 2. Add the curry paste, whisk well, and cook, continuing to whisk, for 1 minute. Whisk in the broth, sugar, fish sauce, and remaining coconut milk. Bring to a simmer over medium-high heat. 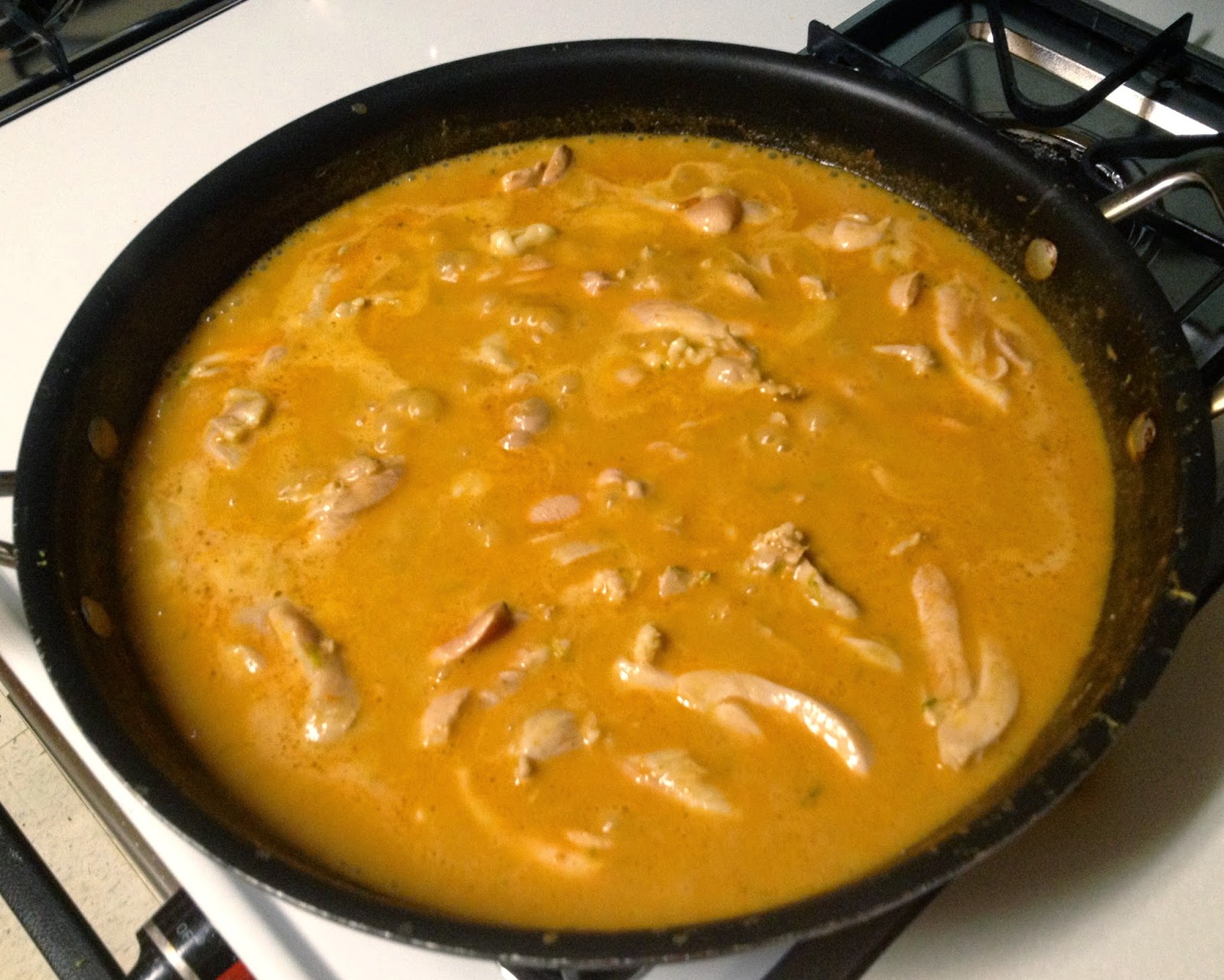 3. Add the chicken and lime zest, and continue to simmer, adjusting the heat as necessary. 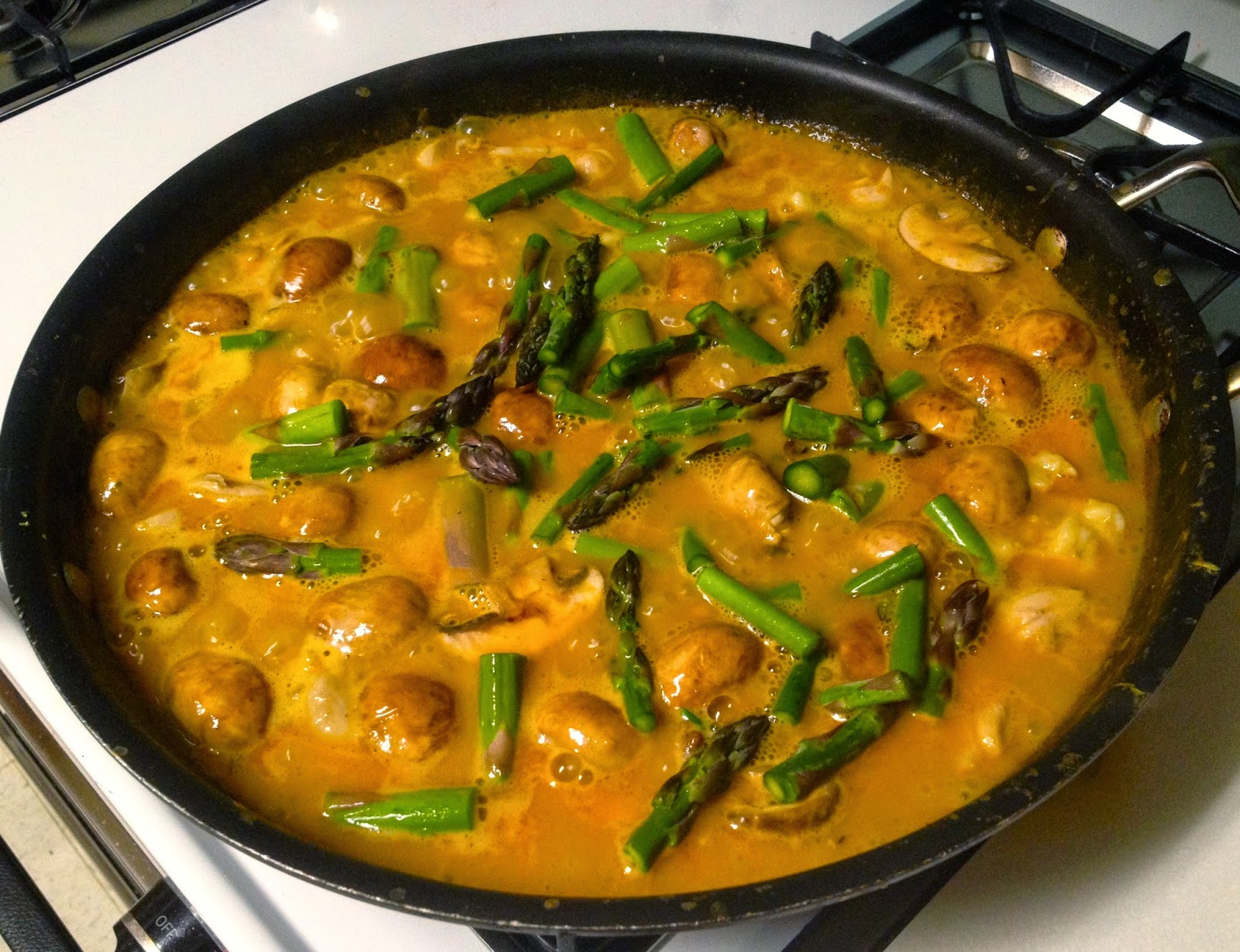 4. After 2 minutes, add the asparagus and oyster mushrooms and continue to simmer until everything is tender and cooked through, about 3 more minutes.   Remove the curry from the heat. Season to taste with more sugar and fish sauce, and stir in the cilantro. 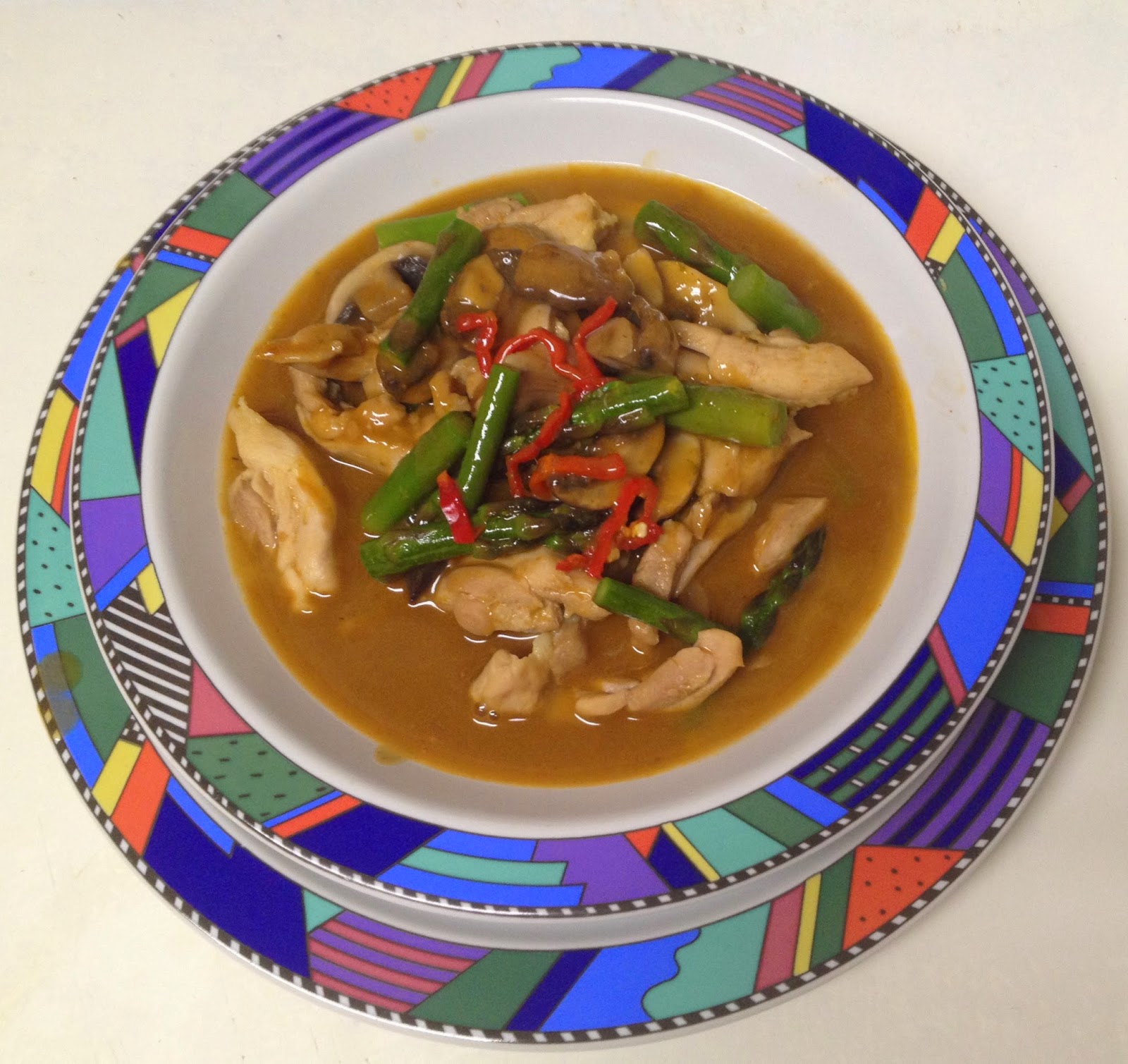 5. Transfer to serving bowl (or serve right out of the pot). Garnish with the red chiles and a drizzle of coconut milk.
Asparagus Steamed in a Paper Bag from Tyler Florence 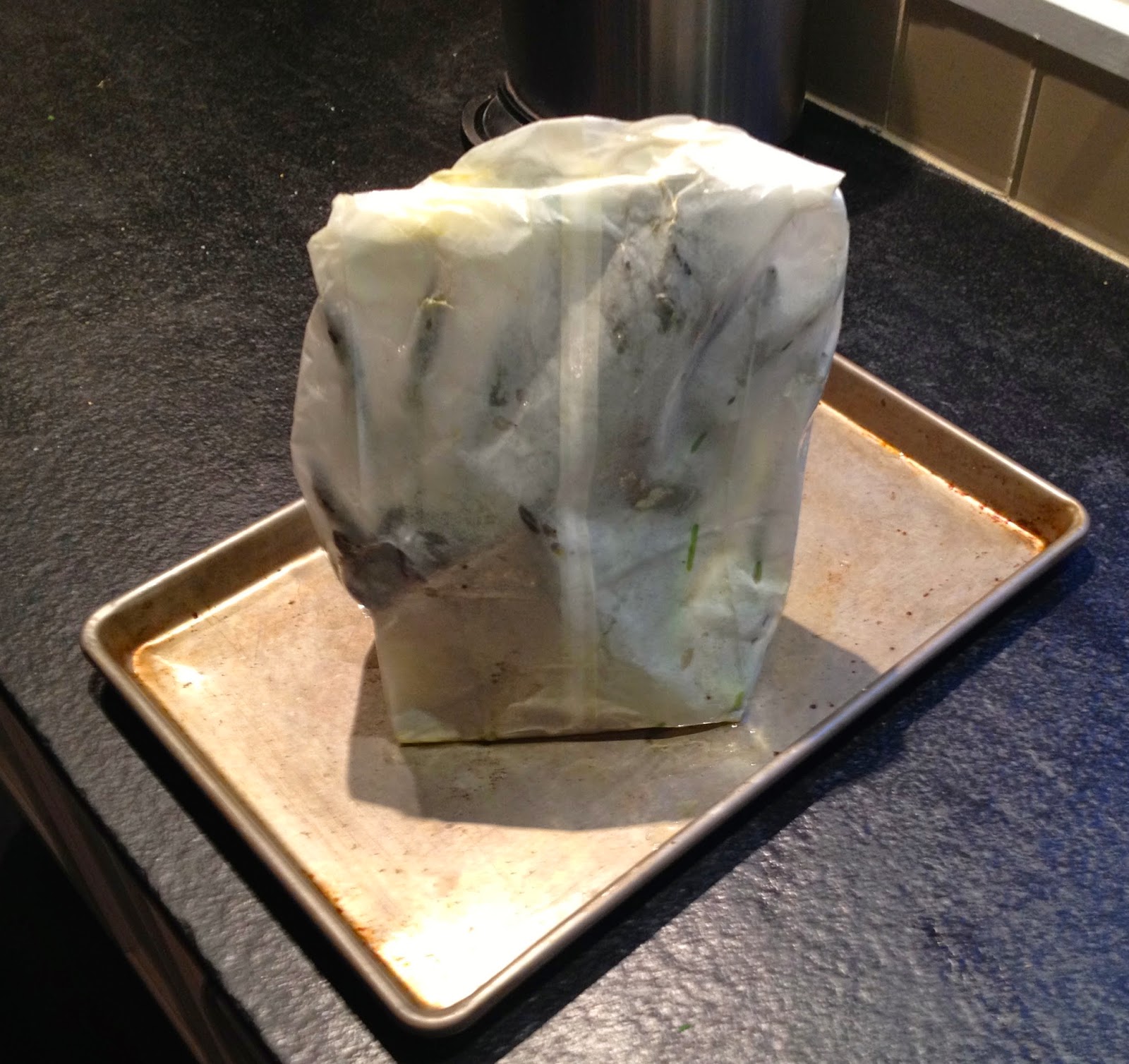 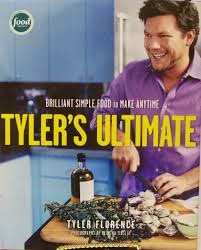 Finally a method of cooking asparagus that I’d heard of before.  Tyler Florence is one of my go-to chefs for recipes.  “Tyler’s Ultimate” (Clarkson Potter 2006) is dog-eared to death because I cannot get enough of this man’s food.   So when I saw this technique I had to try it.  The hardest part about this recipe was finding the right paper bag.  I ended up in the Sag Harbor IGA’s Bakery section where they still use paper bags and where I was given mine for free!   The idea behind steaming the vegetable is based on the fact that it you boil asparagus, you’re boiling out nutrients and flavor.   I have to admit, Andrew was not terribly impressed.  He likes his asparagus roasted and he was not wild about the lemon.  I liked it a lot.  And there’s the theater of cutting open the bag in front of your dinner guests and their surprise at seeing the beautifully cooked Asparagus tumble out.  Here is the recipe: 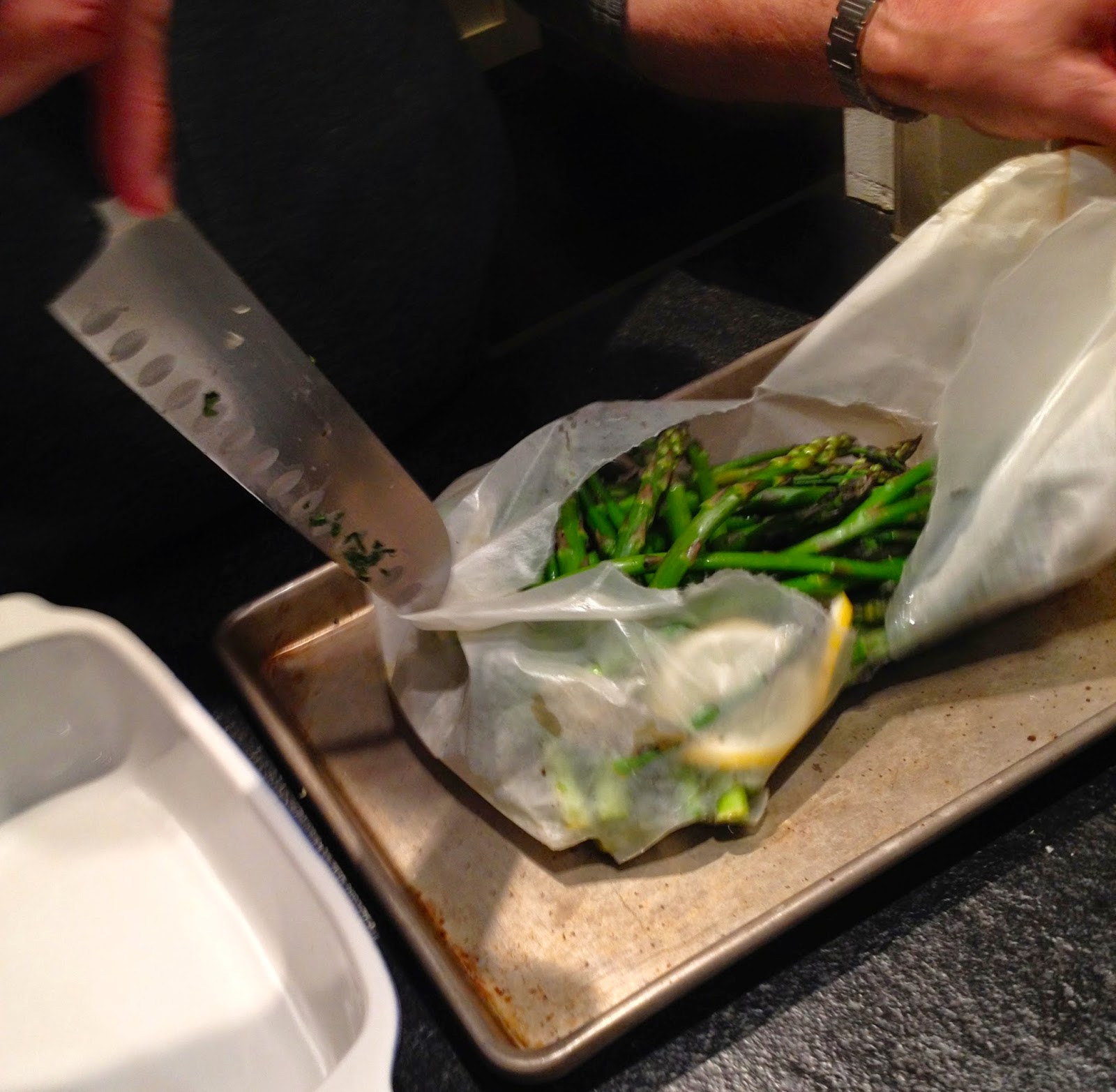 Preheat the oven to 350 degrees F and arrange an oven rack in the middle of the oven. Get yourself a paper bag large enough to hold the asparagus comfortably. Throw the asparagus in there and drizzle the outside of the bag with olive oil to keep the bag from burning. Sprinkle the asparagus with the salt and cracked pepper and toss in the lemon slices and bay leaf. Close the bag, folding it over several times and creasing the folds well to hold the steam in. Put the pan on a baking sheet, drizzle it with more olive oil, stick it in the oven, and bake for 20 minutes. 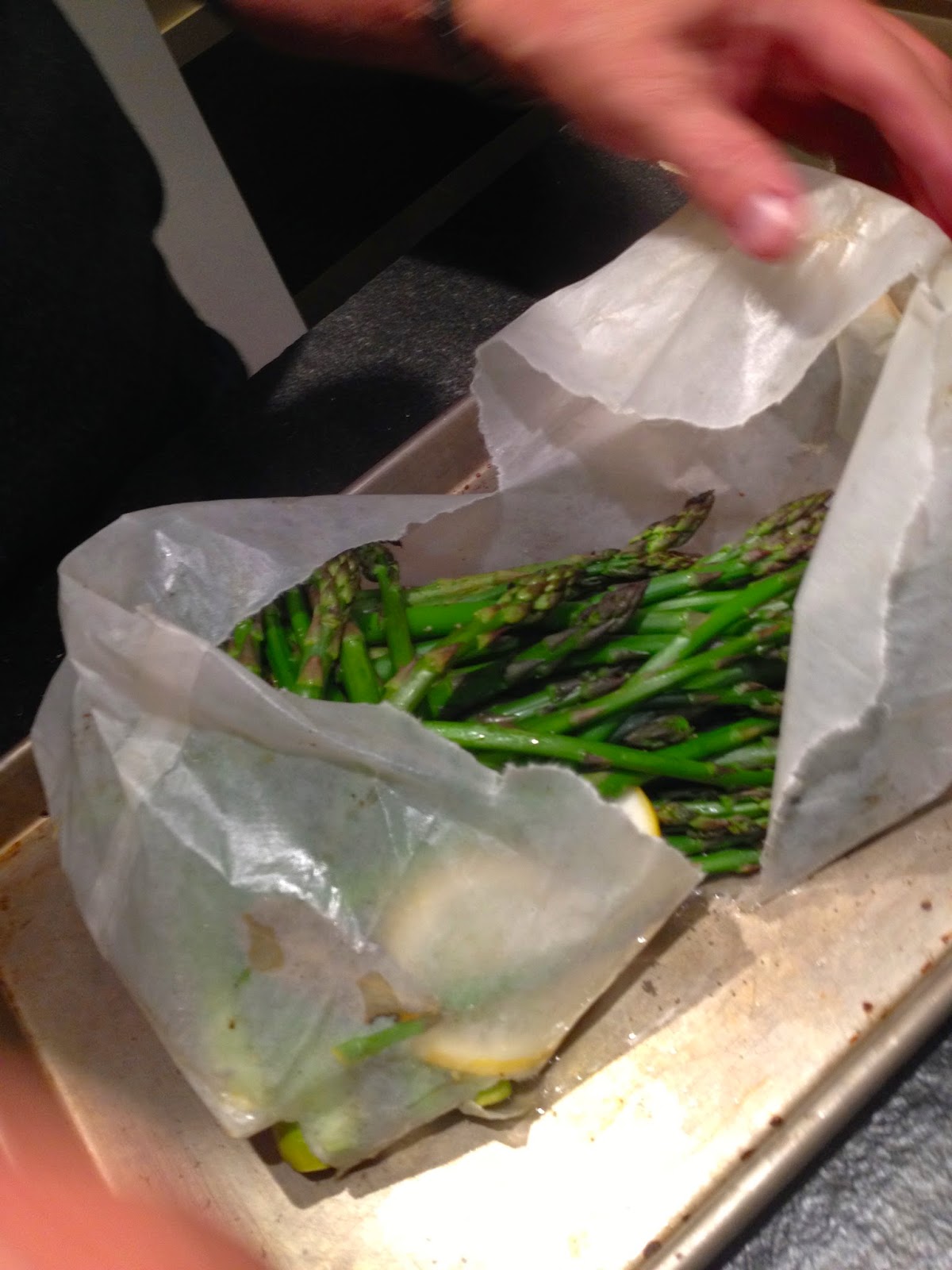 Take the baking sheet out of the oven and set it on top of the stove. Set a serving plate next to the stove. Using a kitchen towel or a pair of kitchen tongs, raise the bag over the plate, open the bag, and slide the asparagus out onto the plate. Drizzle with a little more olive oil and serve hot.
Author: Monte Mathews
Filed Under: 30 Minute Meals, Asparagus and Mushrooms, Asparagus Revuelto, Asparagus Steamed in a Paper Bag, David Tanis' Asparagus Spanish style, Egg Dishes, Penang Curry with Chicken, Tyler Florence
Herb-Crusted Cod with Lemon-Dill Beurre Blanc Sauce
Melissa Clark’s Salmon with Anchovy-Garlic Butter