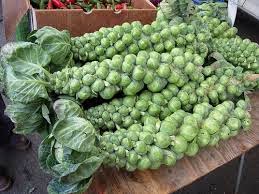 The stalks of Brussels Sprouts made their appearance at the farm stand a couple of weeks ago.   Because the weather here has been unusually warm, Brussels Sprouts seemed a little out of season.  But with the temperatures falling, it was time to find something to do with them.  Let’s face it, Brussels Sprouts are a love-them-or-hate-them vegetable.  Nobody is on the fence about them.  Recently they seem to have surged in popularity but I’ve never been sure this was about the sprouts themselves or whether it was a reaction to the countless recipes that paired them with bacon or roasted them in maple syrup or shredded them into Brussels Sprouts Two Ways (see https://www.chewingthefat.us.com/2014/01/almonds-brussels-sprouts-hot-and-cold.html) which is reason alone to head out to dinner at Almond (1 Ocean Road, Bridgehampton NY Tel (631) 537-8885).

That recipe made me a convert to these tiny cabbages. Wanting to see if I could expand my repertoire, I poked around and lo and behold, I came across a recipe that made them into a pasta sauce.  Furthermore, it was a vegetarian dish made even more healthy by the use of Whole Grain Spaghetti.  This dish could even make it onto Almond’s Meatless Monday menu!  But I could save myself a 100 mile drive  from the city and make it at home.

Its creator is Giada de Laurentis, the Food Channel Chef and resident expert on all things semi-Italian.  But surely the Brussels Sprout, named for the country where they are grown in profusion, is not an Italian staple.  In doing some minor research I discovered that this is indeed the case.  Italy imports its sprouts from northern Europe, where else?  However, if you are at all familiar with Italy and Italians, you will not be surprised to hear that in one particular article on a website called Alimentipedia.it, that ‘not withstanding their name, Cavolini di Bruxellesappear to be of Italian origin and introduced to Belgium by Roman Legions.’  At any rate, aside from the Spaghetti, I don’t think I’d called Giada’s recipe Italian but it is a wonderful Meatless Monday entrée that just goes over a 30 minute timeframe start to finish. If you use a food processor fitted with the slicing blade to slice the Brussels sprouts you can even cut that time down.  The mushrooms, cheese, onions and garlic are great with the sprouts.  The crème frâiche and vegetable stock give it some sauce and the lemon juice and zest liven the dish up.  You can make this anytime now—especially after the first freeze. It’s said that Brussels Sprouts are sweeter then.  Here is the recipe: 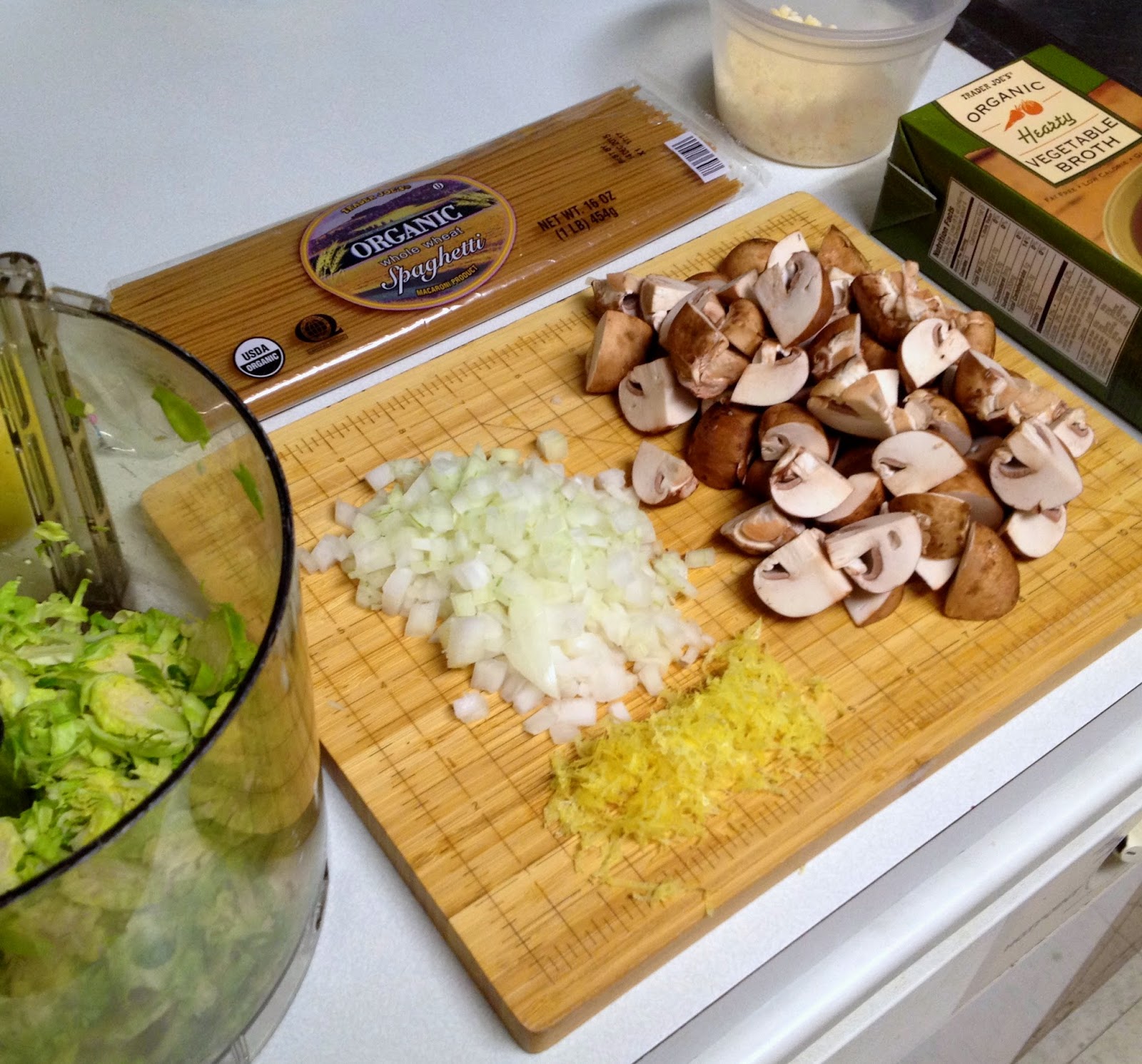 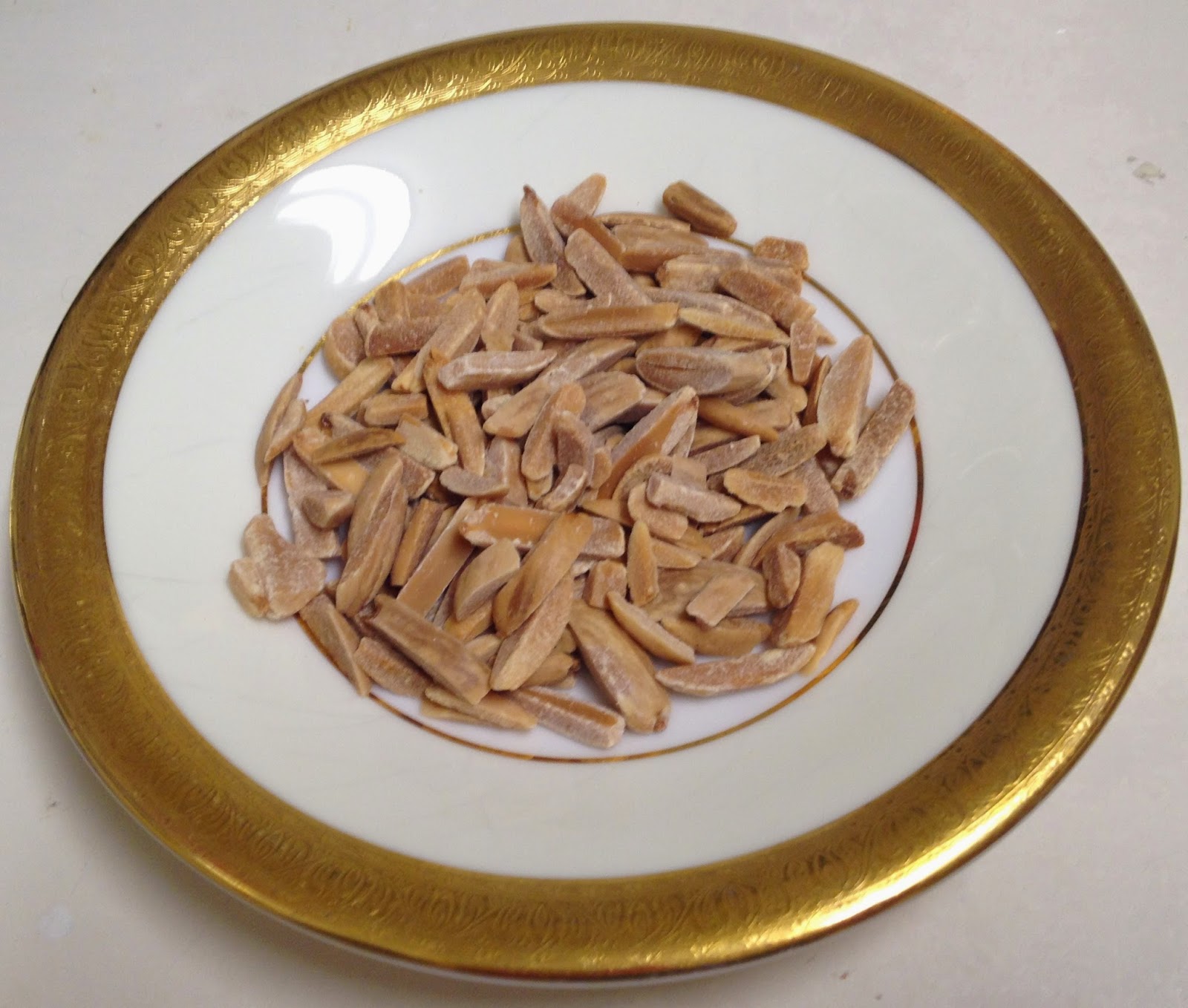 *Cook’s Note: To toast the almonds, arrange in a single layer on a baking sheet. Bake in a preheated 350 degrees F oven until lightly toasted, 8 to 10 minutes. Cool completely before using. (I used my toaster oven and this photo shows the results: Perfect! 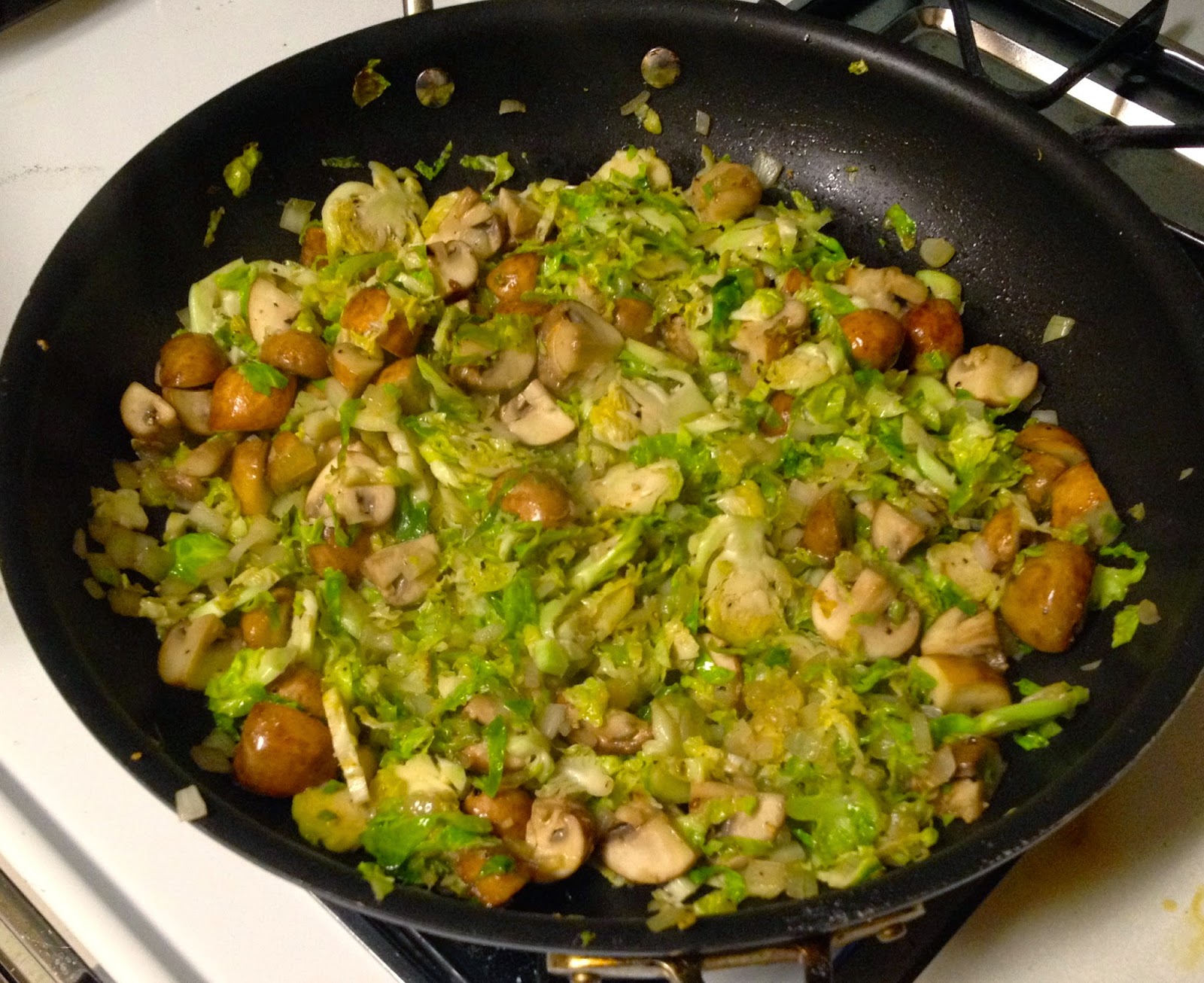 1. In a large skillet, heat the oil over medium-high heat. Add the Brussels sprouts, onions, mushrooms, garlic, 1 teaspoon salt and 1/2 teaspoon pepper. Cook, stirring occasionally, until the onions are soft, 6 to 8 minutes. 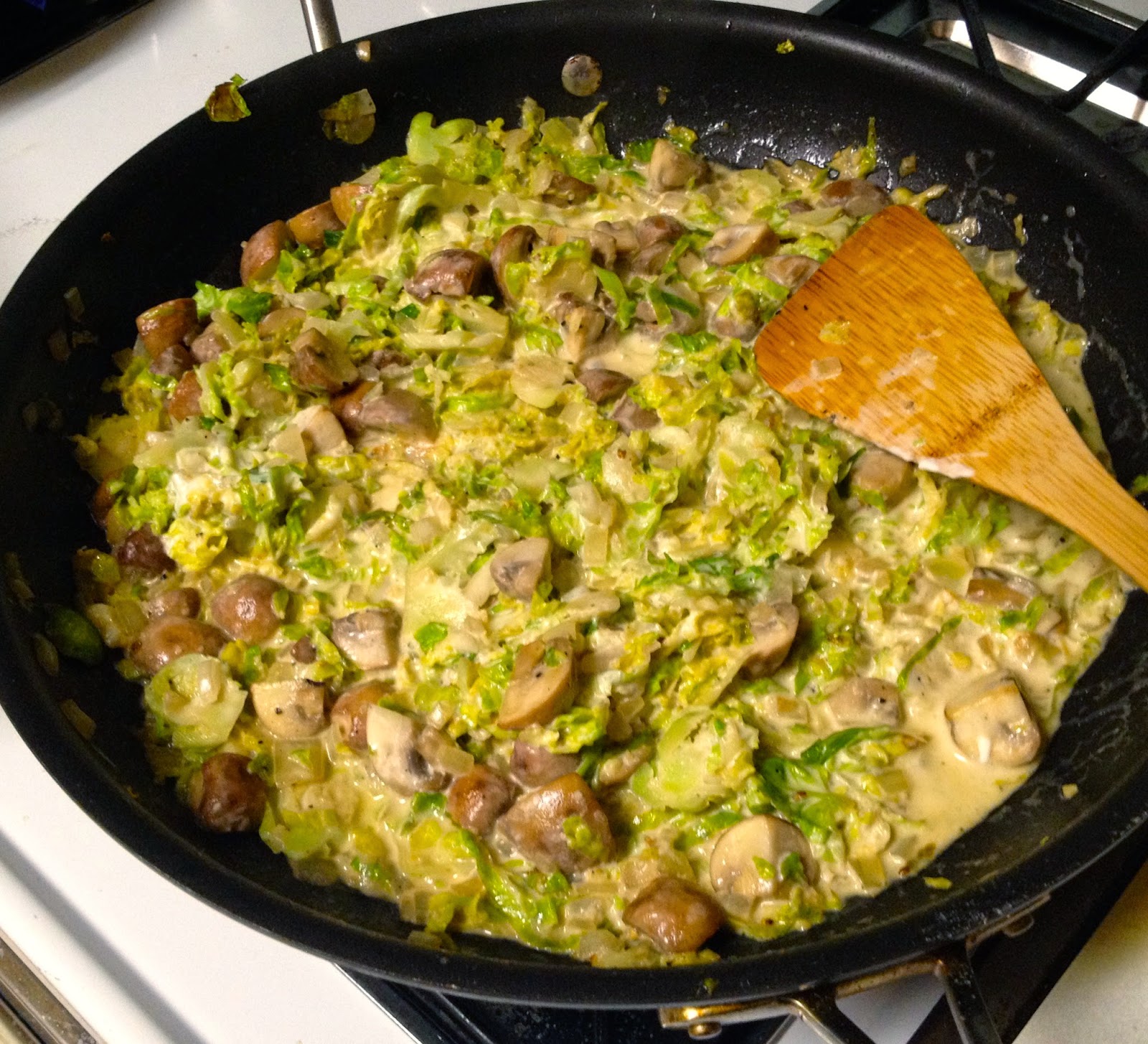 2. Add the creme fraiche, vegetable broth, lemon juice and lemon zest. Bring to a simmer and stir until the mixture forms a creamy sauce, about 2 minutes. Stir in 2 teaspoons salt and 1 teaspoon pepper. 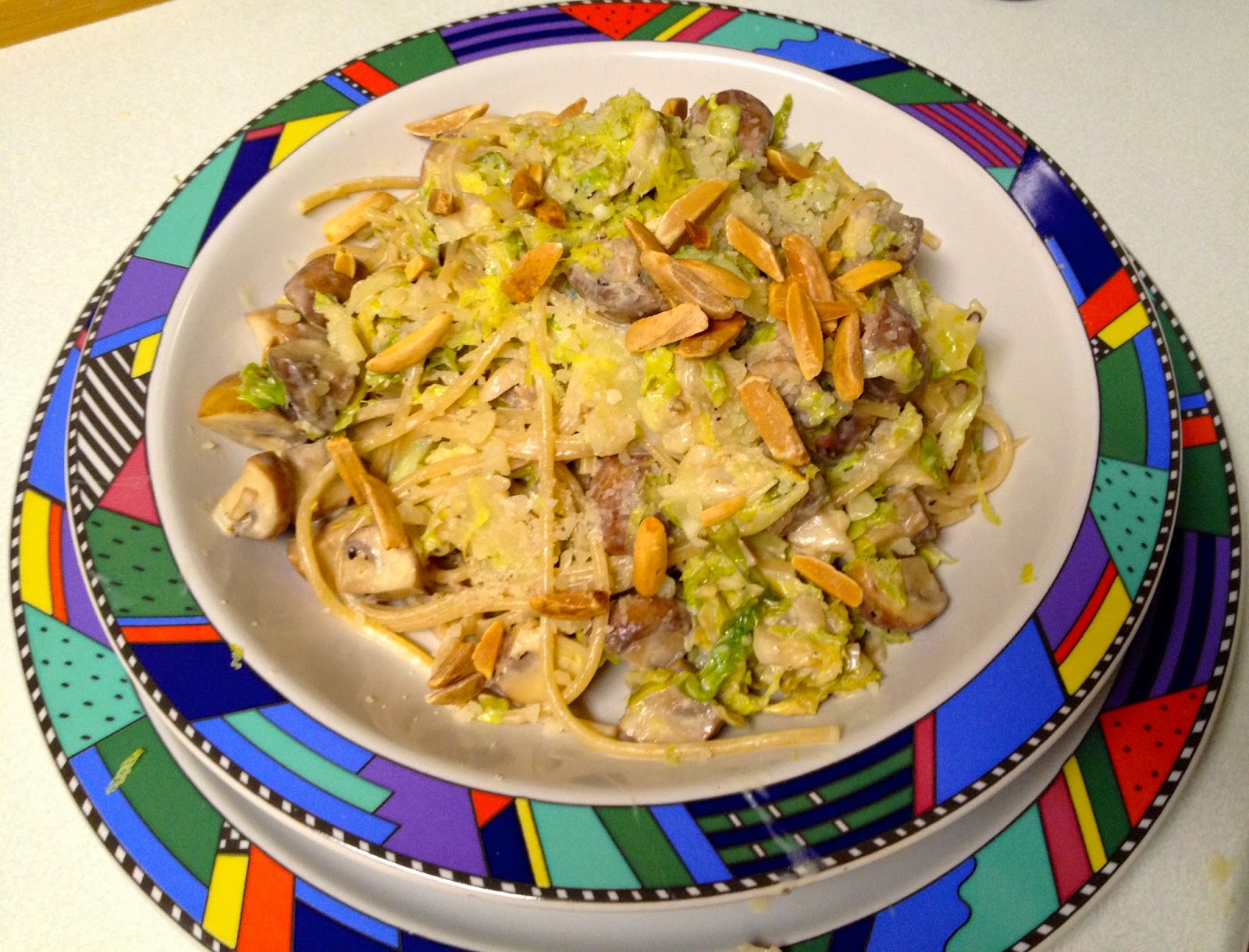 3. Meanwhile, bring a large pot of salted water to a boil over high heat. Add the pasta and cook until tender but still firm to the bite, stirring occasionally, 8 to 10 minutes. Drain and place in a large serving bowl. Toss with 1/2 cup cheese.
Pour the sauce over the pasta, add the almonds and toss until coated. Sprinkle with the remaining cheese and serve.
Author: Monte Mathews
Filed Under: Brussels Sprouts, Giada de Laurentiis Spaghetti with Brussels Sprouts and Mushrooms, Meatless Meals, Vegetarian, Weeknight Dinners
Mario Batali’s Chicken Saltimbocca with Asparagus
Bourbon Chicken