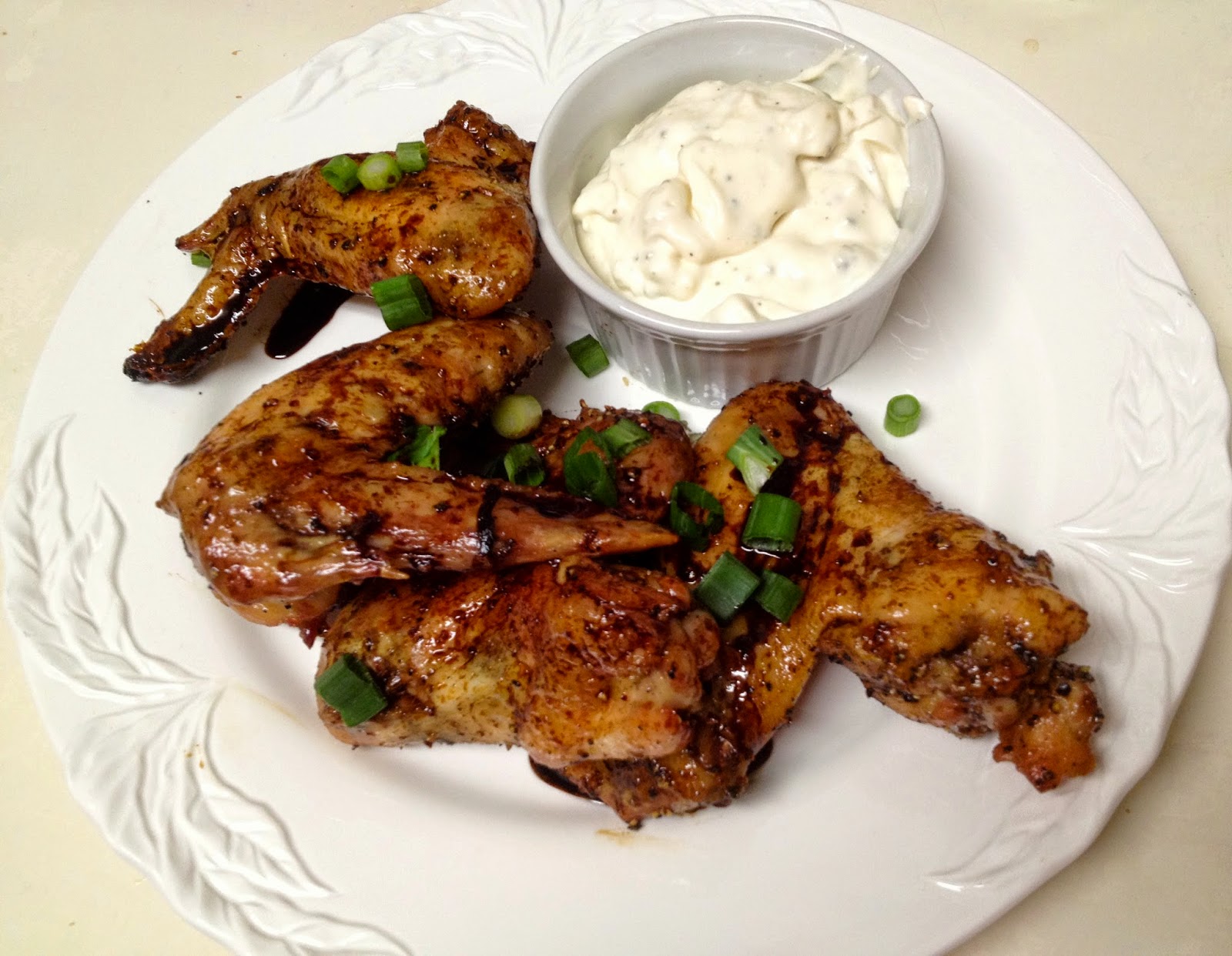 You may be aware that there’s a football game being played this coming weekend that is the Granddaddy of them all.  This year’s game has the Northwest facing off against the Northeast in Glendale AZ, which at this writing will still take place despite a confusing controversy over deflated balls. (Don’t ask). In the history of television, the three most watched broadcasts of all time are all for this one game.  It seems quite right then that this would be called the Super Bowl.  It shuts down traffic, fills bars, taxes septic systems at the end of every quarter, and is scheduled to be watched by over 100,000,000 people.  But if you think that’s an impressive number, how about this:  On Sunday February 1st, 1.25 billion chicken wings will be consumed—that’s four for every man, woman and child in the entire country.  That’s in addition to the 8,000,000 lbs. of guacamole and the 28,000,000 lbs of potato chips.  With all that food, and with the high octane dipping sauce that goes along with it, is it too much to hope that the least we could do is to bake our wings rather than fry them? Well, if you’ve ever had a Balsamic Soy-Glazed Chicken Wing, you would gladly give up the fryer.  But since I am not all sure your penitent approach is natural, I have also included a recipe for the best Buffalo Wing Blue Cheese dipping sauce I have ever tasted.

The most famous wings in the world are, of course, Buffalo Chicken Wings, named after the city of their birth, Buffalo New York. There’s one contender for Inventor of the Buffalo Chicken Wing: Teressa Bellissimo, who owned Anchor Bar with her husband, Frank.   The story goes that the Bellissimo’s son, Dominic, showed up at the Anchor with a group of his college friends late at night.  Teressa, wanting to feed the boys a quick snack, deep-fried chicken wings that she’d tossed in Cayenne Hot Sauce. The  restaurant normally

used chicken wings for making chicken stock or threw them away entirely.   The same Dominic told a different story.  He said one Friday night, people had been buying a lot of drinks and so, he himself, wanted to treat them to a snack.  The mostly Catholic patrons were forbidden from eating meat on Friday but after midnight, Teressa appeared with a platter of wings.  The Bellissimos are nothing if not great story tellers.  Father Frank claimed that a delivery of chicken backs and necks, used in the making of the restaurant’s spaghetti sauce, instead yielded wings and he asked Teressa to do something with them.  Strangely, an extensive 1969 article in a local newspaper about the Anchor Bar, never mentioned a word about chicken wings. However, the ultimate Hot Sauce, Frank’s, backs up the Bellissimos multiple stories by stating in its marketing materials that it was the hot sauce used in their original recipe. 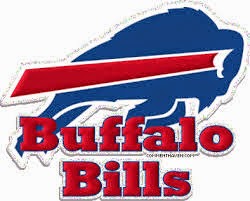 And how did the Buffalo Chicken wing gain national prominence?   Well, back to football again where, from 1991 through 1994, the local football team, the Buffalo Bills made four consecutive appearances at the Super Bowl.  Naturally the press focused on every aspect of the city and brought the Buffalo Chicken Wing to national prominence where it has remained right up until those 1.25 billion wings greet their Super Bowl fans this coming Sunday.  Now I love chicken wings.  I’ve made all kinds of them and I have to say that this recipe from a 9 year old Gourmet magazine is one of my all time favorites.  It has all the crunch of a fried wing yet they are oven baked and get their crisp on in the oven.  While the naked wings are tossed in olive oil, salt and pepper, the Balsamic Soy Glaze simmers away on the stove.  Once the wings have achieved the perfect shade of gold, they are tossed in the sauce not once but twice.   Whether you choose to eat them all alone or with that most traditional of Buffalo Wings Blue Cheese Dressing, they are a treat in every sense of the word.  Here is the recipe:

Recipe for Balsamic Soy-Glazed Chicken Wings from Gourmet
And Blue Cheese Dipping Sauce.
Takes all of 10 minutes to prepare and 45 to cook. Makes 6 to 8 snack servings dependent on appetite. 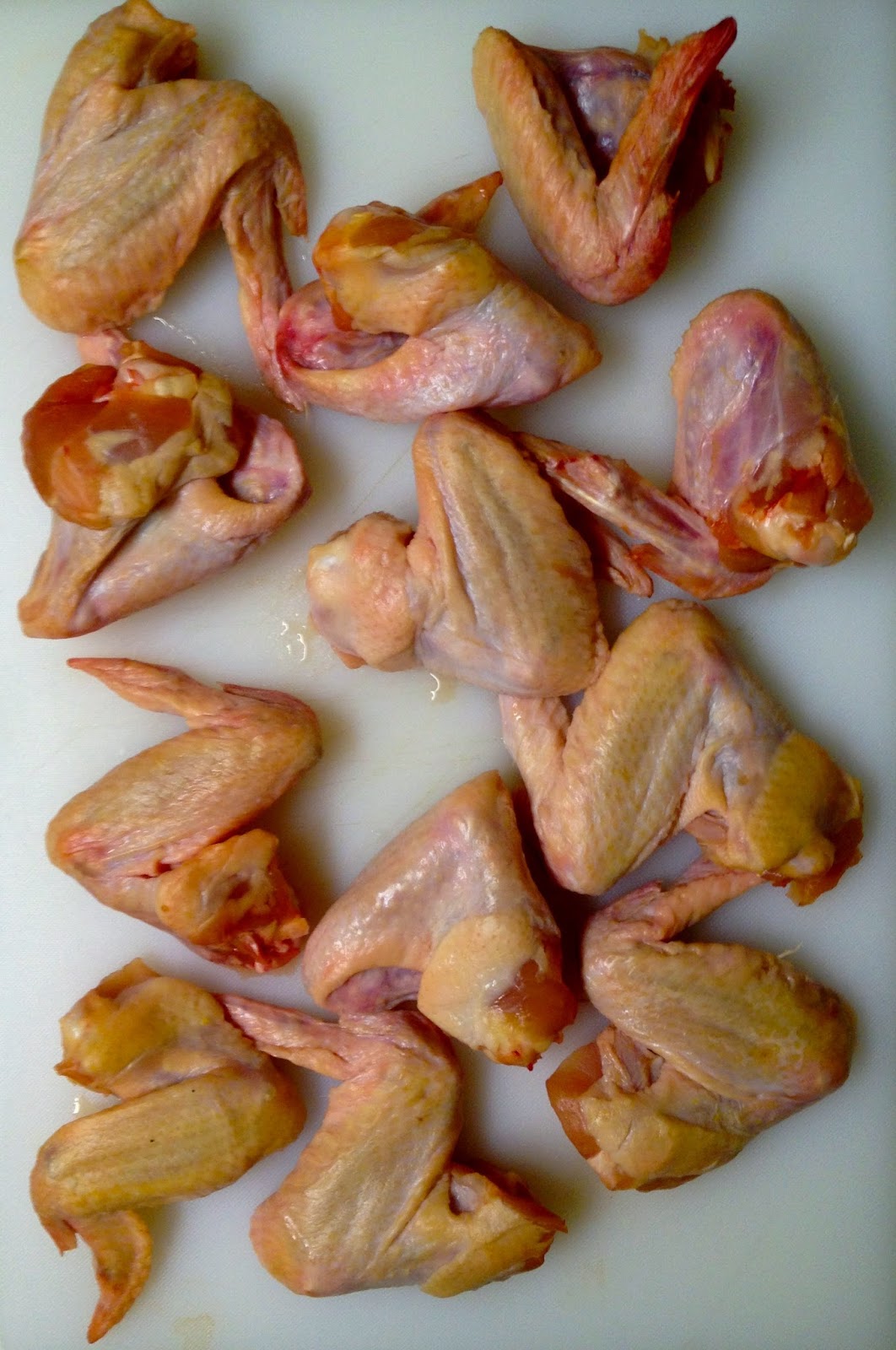 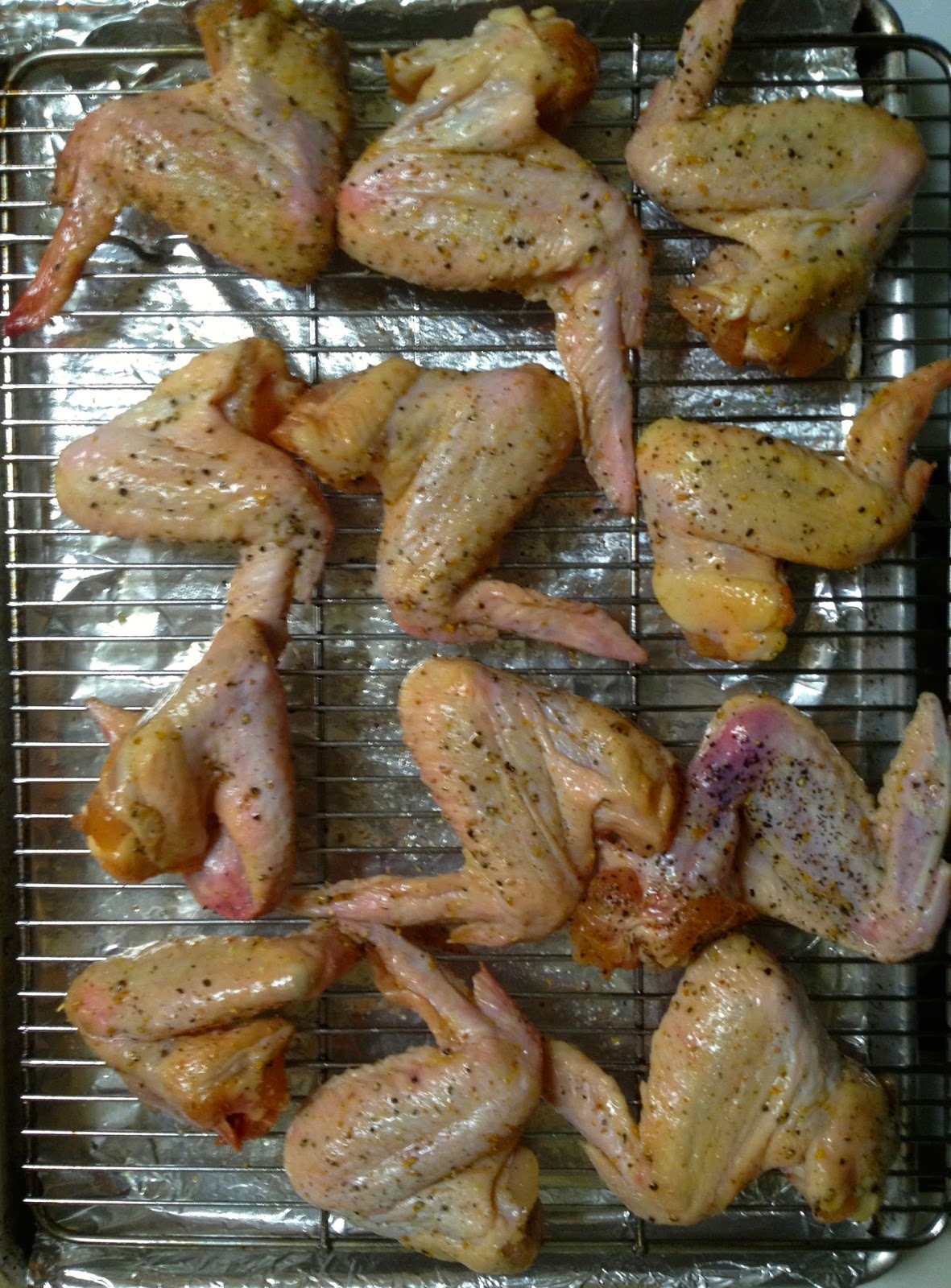 Pat wings dry, then toss with oil, salt, and pepper in a large bowl and divide between preheated pans, spreading wings in 1 layer. Roast, without turning, until golden and tender, about 35 minutes.
While wings roast, simmer vinegar, soy sauce, and sugar in a 1- to 1 1/2-quart heavy saucepan, stirring occasionally, until reduced to about 1/3 cup, 12 to 14 minutes. Remove from heat and stir in butter until melted. 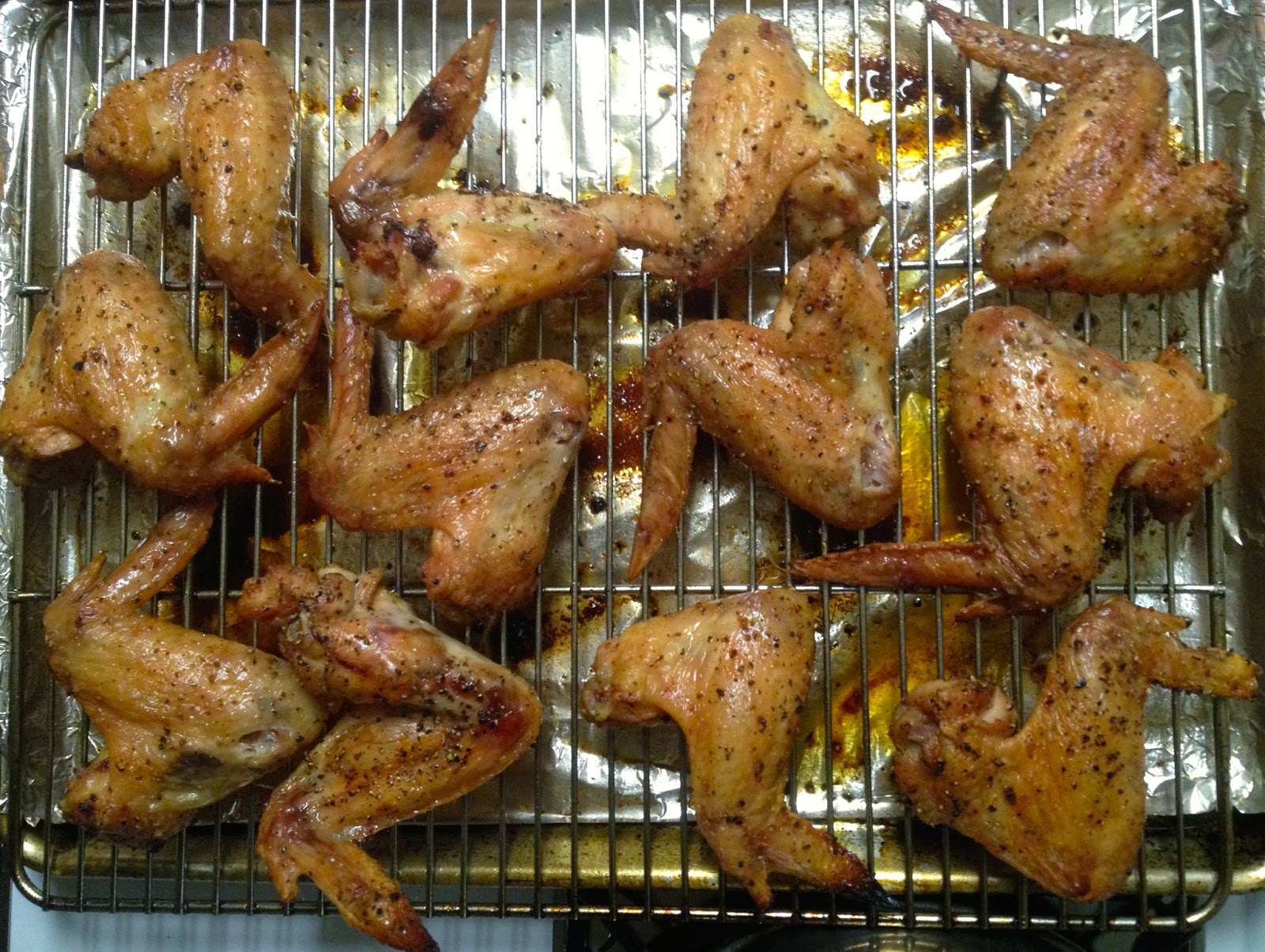 2. Remove roasted wings from oven and let stand in pans 1 minute (to make wings easier to remove from foil), then transfer with tongs to a clean large bowl. 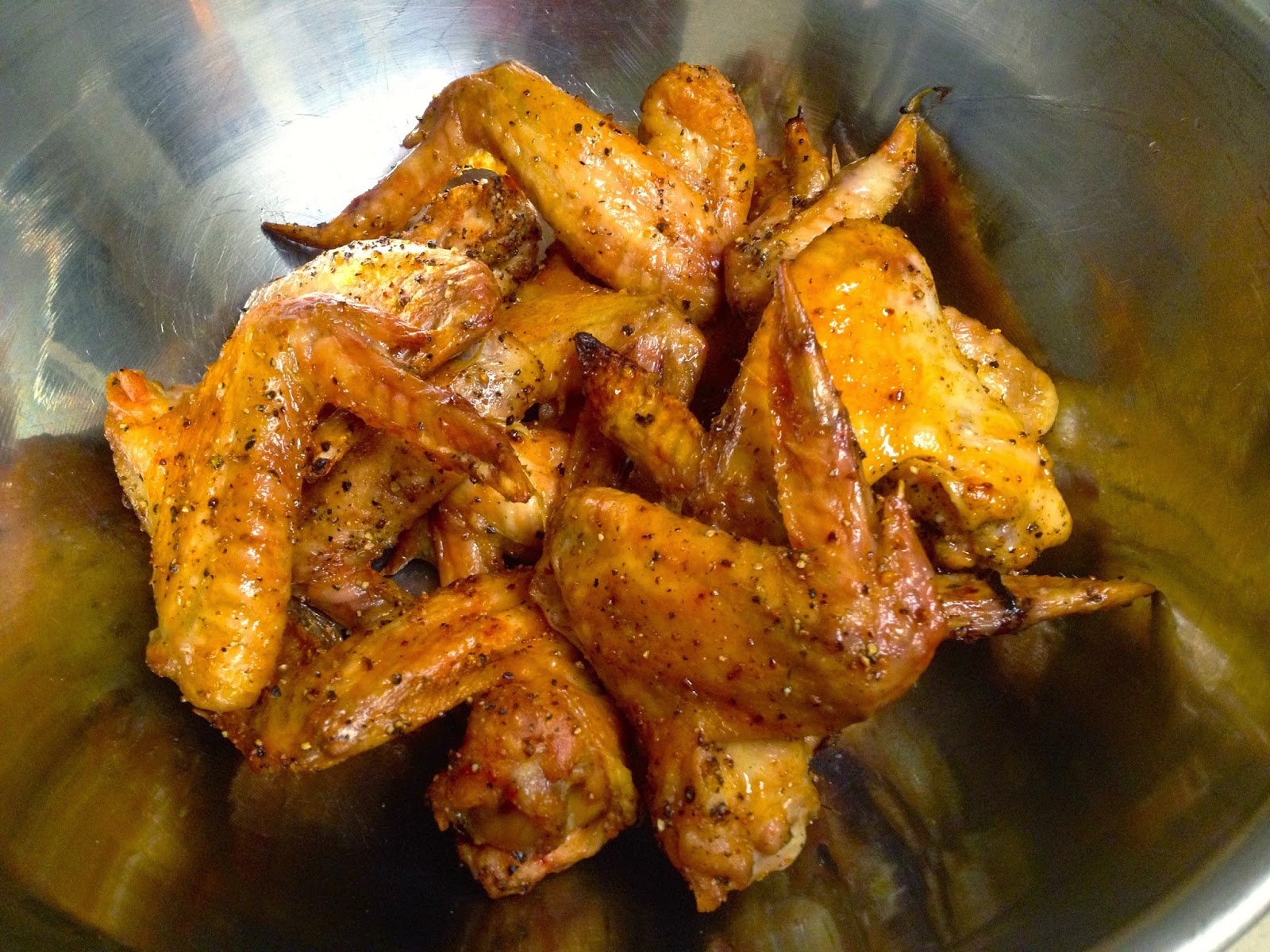 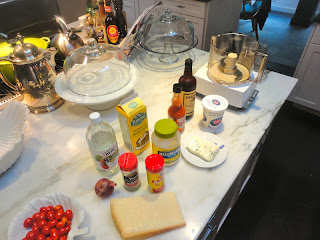 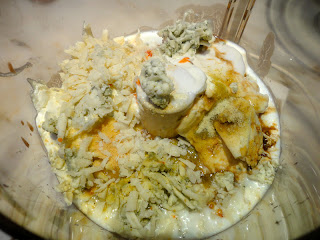 1. Blend the above ingredients in food processor or with a stick blender until evenly mixed and then stir in another cup of blue cheese crumbles (more or less to taste). 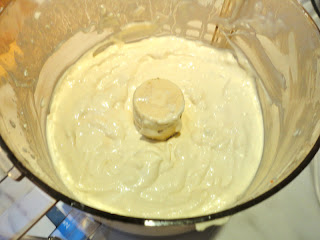