French Onion Soup in a Flash! Who doesn’t love a bowl of French Onion Soup? Topped with melted Gruyère cheese over crusty bread, your spoon digs into the bowl to get to the rich beef and onion broth.  It’s a classic recipe that became wildly popular in this country in the 1960s when interest in French cooking really took off.  Its history goes back a very long time before that.  Onion soups have their roots in Roman times because onions were plentiful, easy to grow and cheap.  For those reasons, they were seen as food for the poor.  In 18th century France, the modern version came into being.  There’s a legend that the first French Onion soup was created for King Louis XV. The story goes that upon arrival at his hunting party’s lodge, all that was in the larder was butter, onions, and champagne.  It seems unlikely that anyone preparing for the King’s arrival would have not stocked the pantry to the hilt but it makes a good story.  But there’s another one that’s even better.

In 1765, a Parisian named Boulanger opened a shop selling a highly concentrated and inexpensive soup that he called “restaurant” which translates to ‘restoring’ in English.  He advertised his soup as an antidote to physical exhaustion, hence the modern use of the word “restaurant.” And it’s a good word to associate with French Onion Soup because the problem with most recipes for the soup is that they themselves are exhausting to make.  To make a good one, most recipes have you standing over a large number of onions stirring them constantly for a good 25 minutes.  At all times, you had to be very careful to caramelize the onions but never to burn them.  Of course, if you were making the genuine article, you would also be making a hearty beef stock. The longer the stock stayed on the stove, the more flavor it achieved.  Small wonder most people waited to go to a restaurant to feed their craving for the soup.  Since I love making soup, I’ve actually given up a sufficient part of a day to make this particular soup.  So imagine my great pleasure in discovering a four-year-old recipe in Bon Appetit’s “Fast, Easy, Fresh” column. 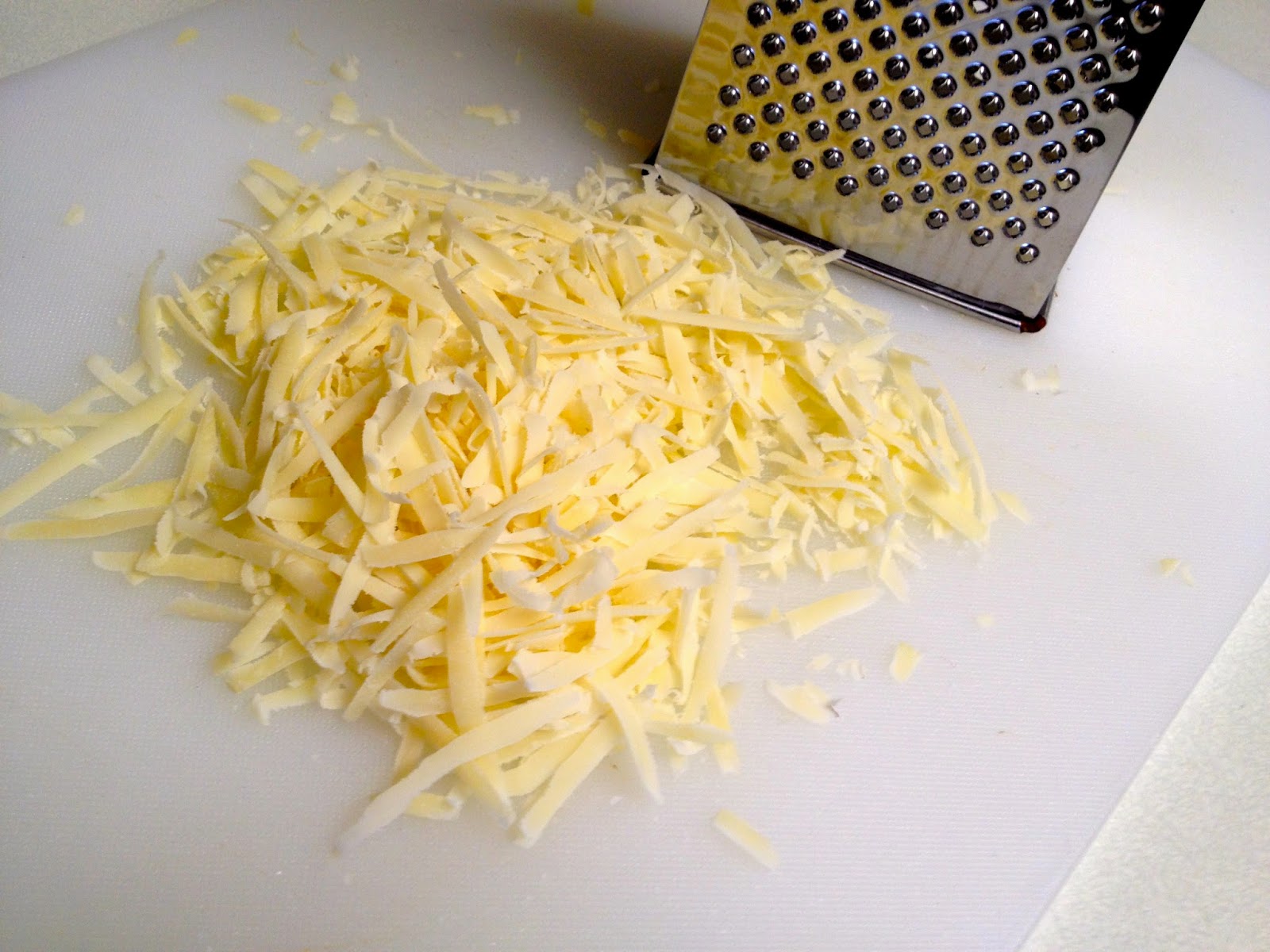 The genius of this particular take on French Onion Soup is that it takes all of 40 minutes to make—that’s their timing, not mine. I brought it in a few minutes under that.  The secret here is that the initial caramelizing of the onions is done in a completely dry non-stick skillet.  You have to use one that’s not Teflon which can’t stand the high heat.  A Silicone coated pan is perfect here.  While the original recipe said this process would take about 15 minutes, I started to sweat it after the first 5 minutes because that’s how fast the onion took on color.  They were completely browned in all of about 10 minutes. That’s when the butter and the brandy or cognac are added.  Don’t skip this latter ingredient of you will end up with a soup that’s too sweet.  Forget making your own stock.  I chose Trader Joe’s Organic Beef Broth.  Once the soup has simmered, it’s time to top it with thick slices of a baguette made to fit the ramekins that will go in the oven topped with either Gruyère or Raclette Cheese.  Into the oven, it goes to emerge minutes later after all of 40 minutes in the making.  Here is the recipe:

Recipe for French Onion Soup in a Flash from Bon Appetit
Takes 40 minutes start to finish.  Recipe is for 4 servings.  I got about 3 using my 1 ¾ cup Ramekins (larger than what’s recommended here.) 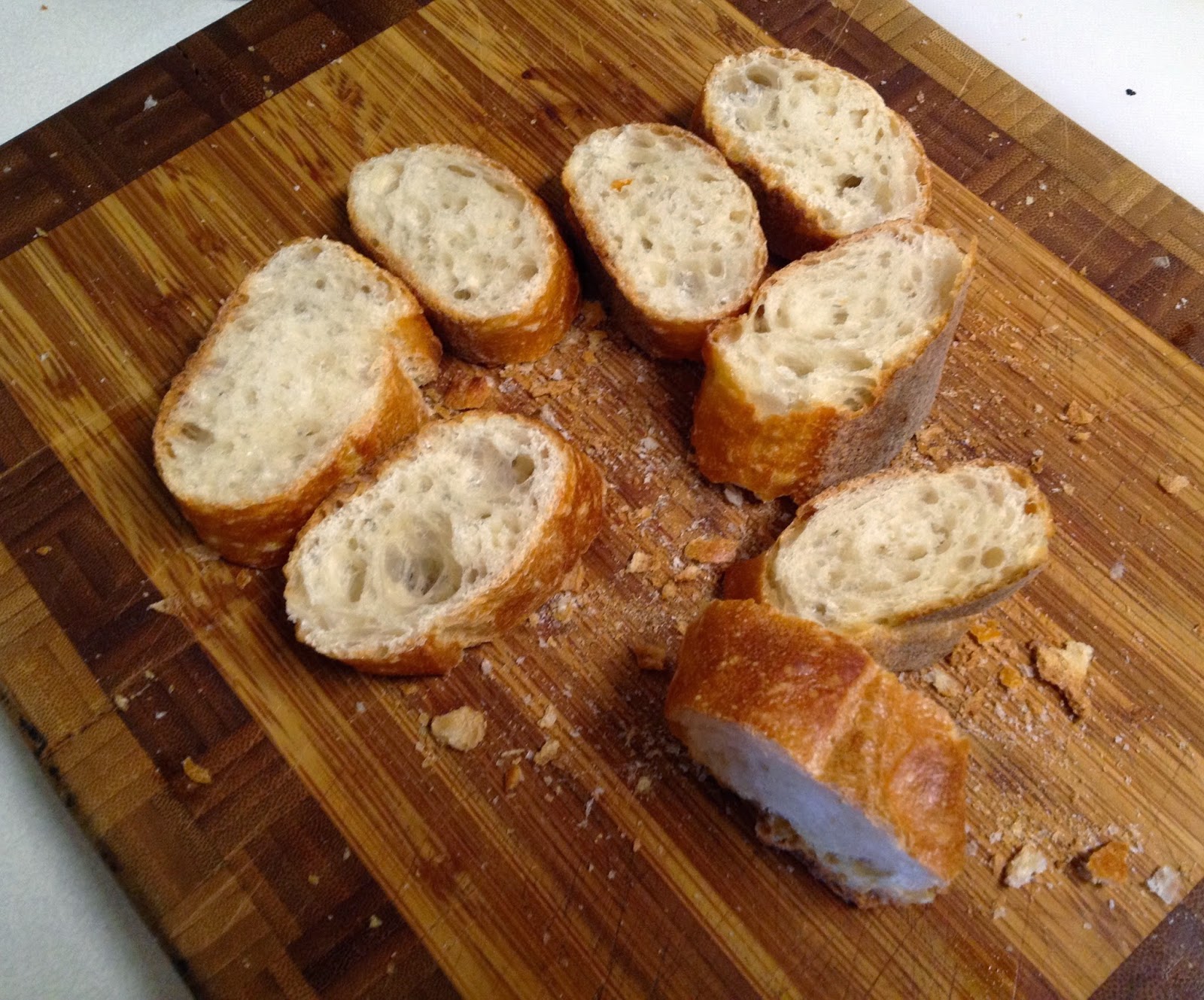 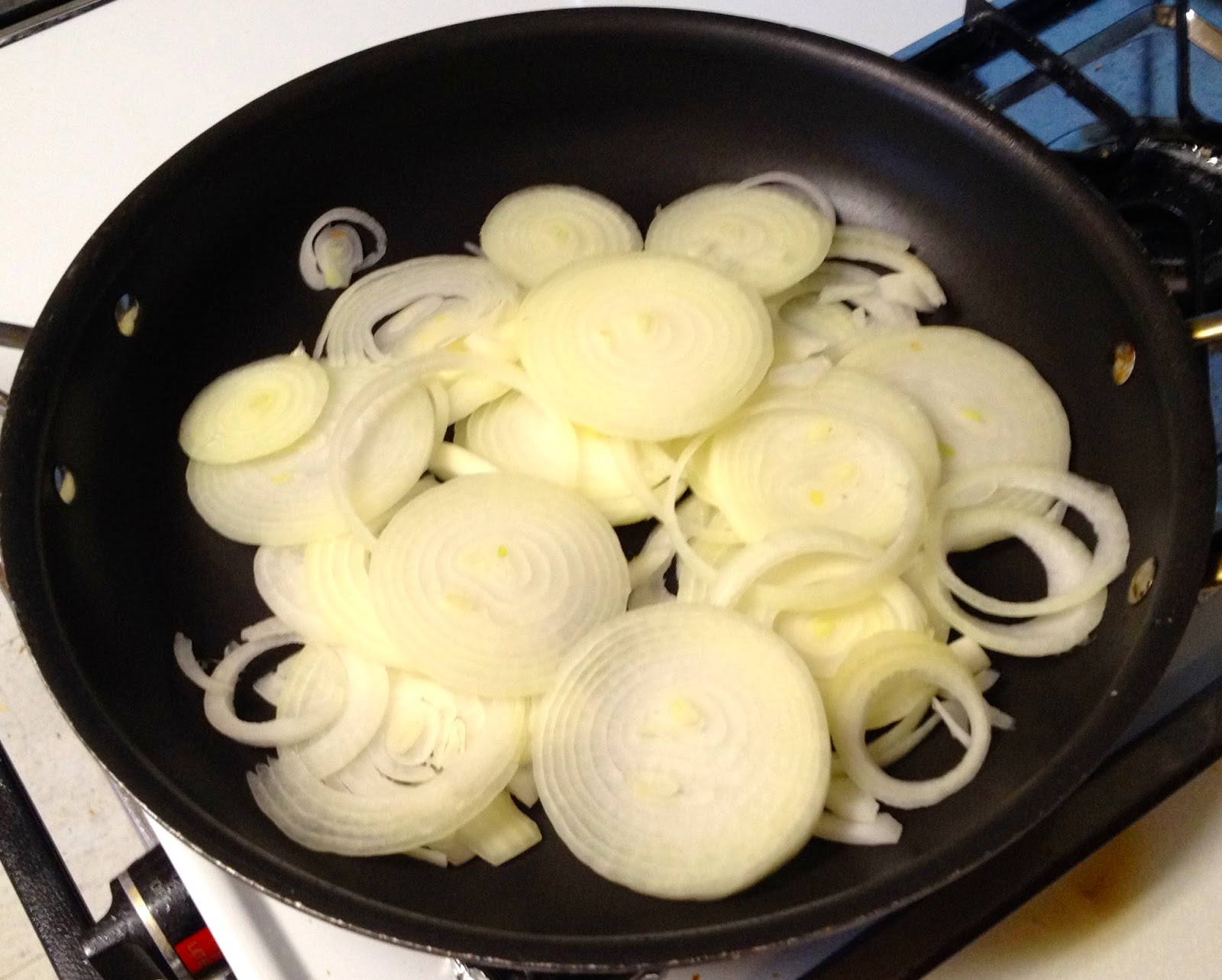 2. Cook onions in a 12″ nonstick skillet over high heat, stirring constantly, until soft and caramelized, about 15 minutes. 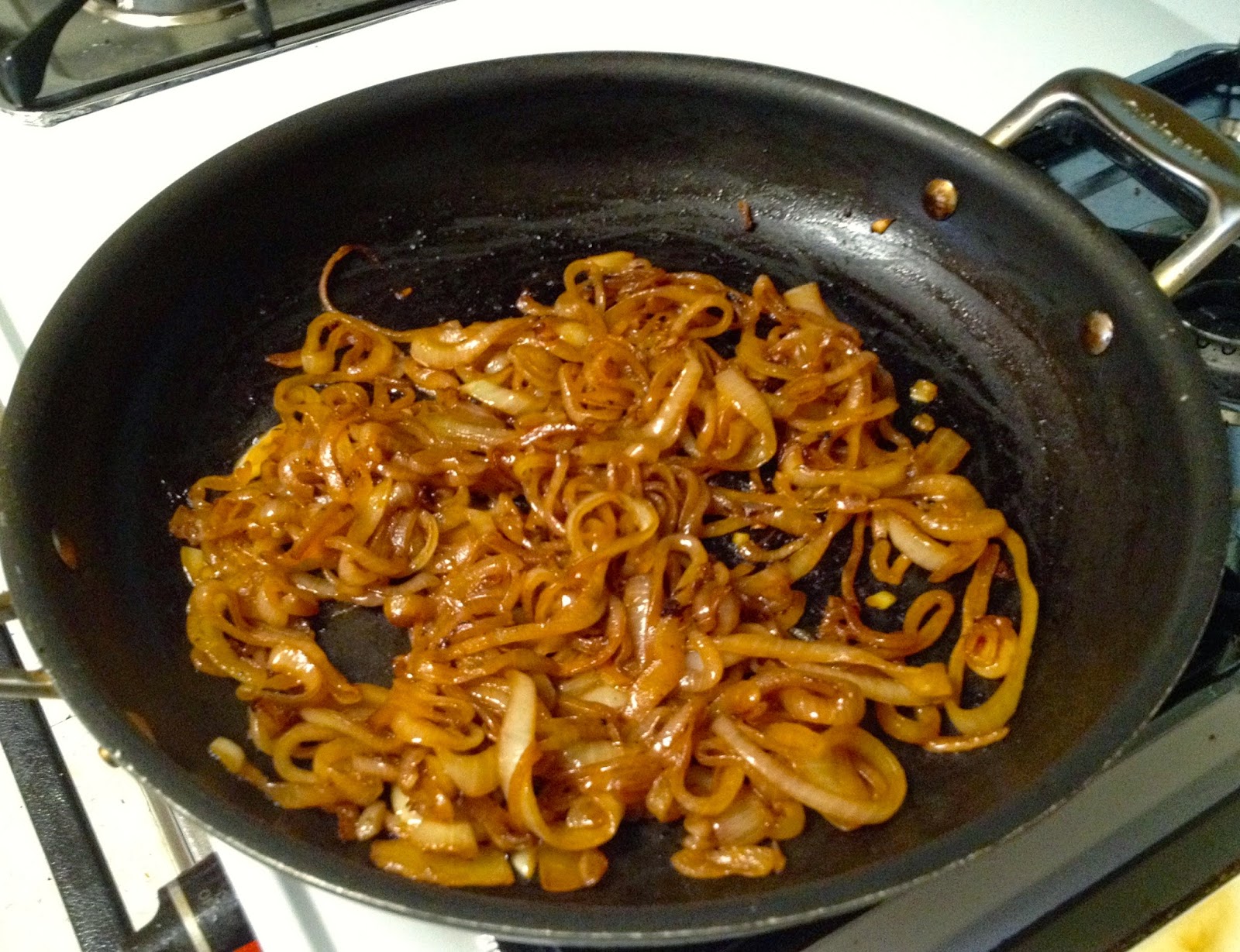 3. Add butter and toss onions to coat. Remove pan from heat and stir in Calvados. Return pan to heat and continue cooking until Calvados is absorbed, about 30 seconds. 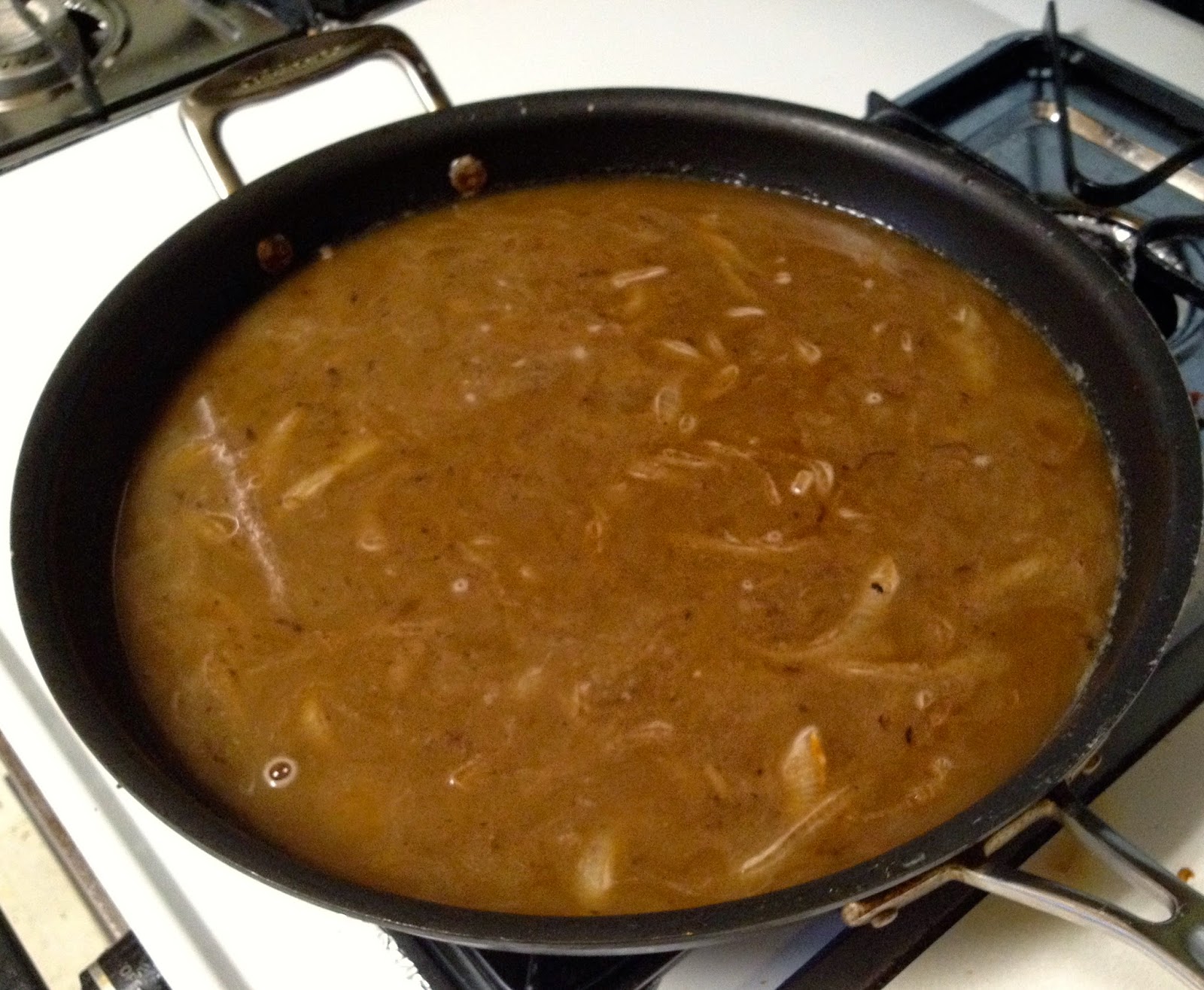 3. Add stock and bring to a simmer. Simmer until soup is reduced to 4 cups, about 5 minutes. Season soup to taste with salt and pepper. 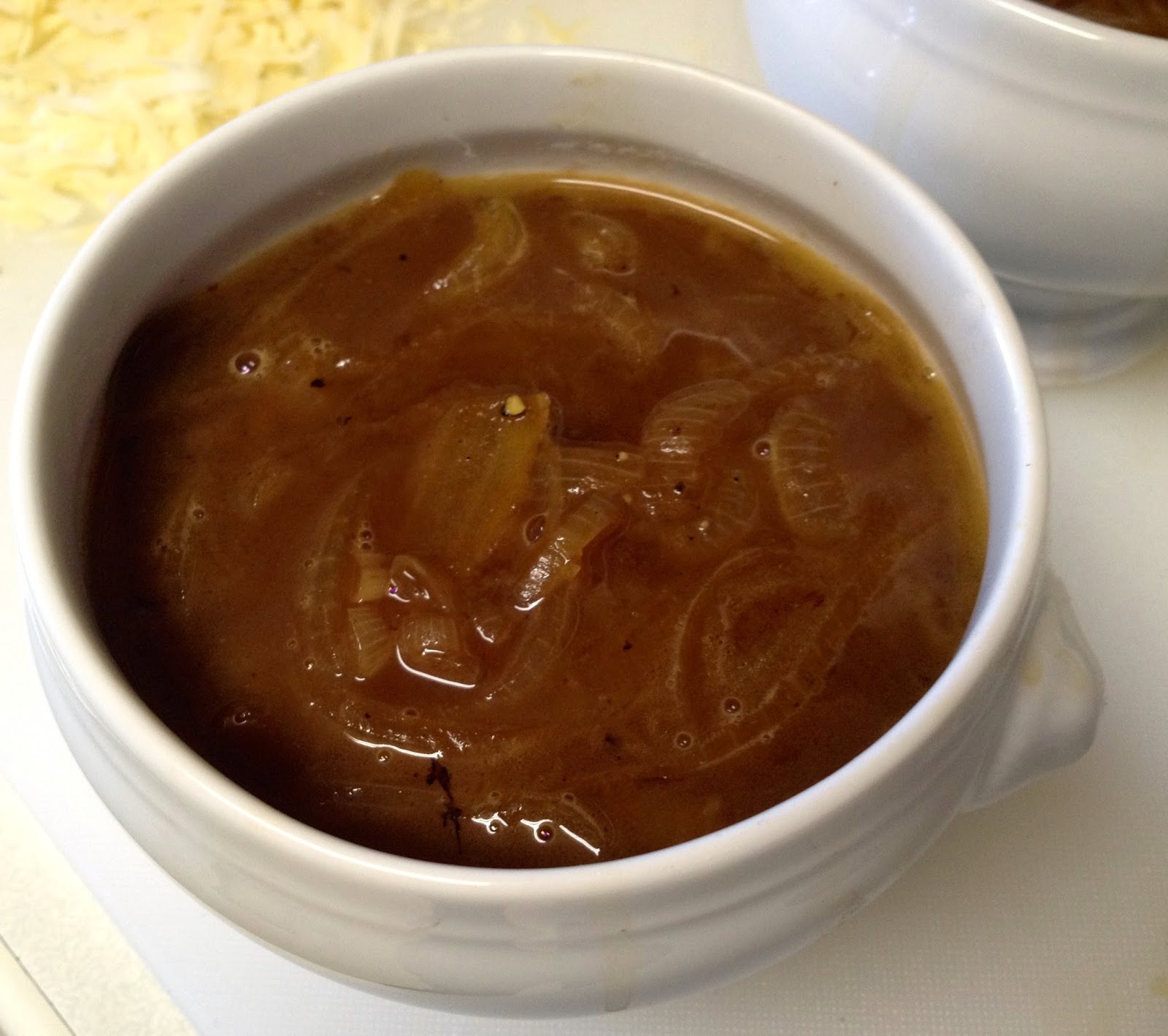 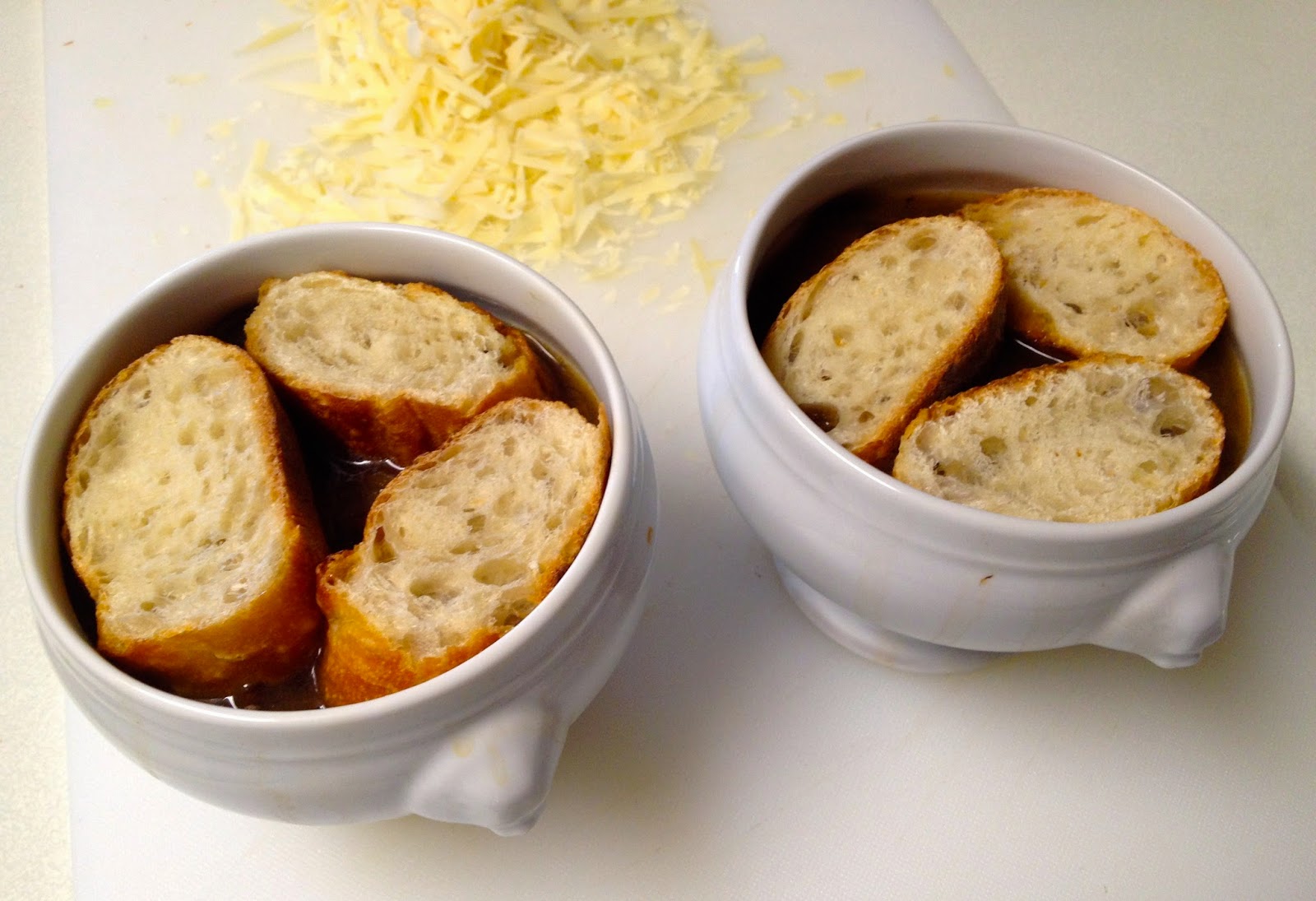 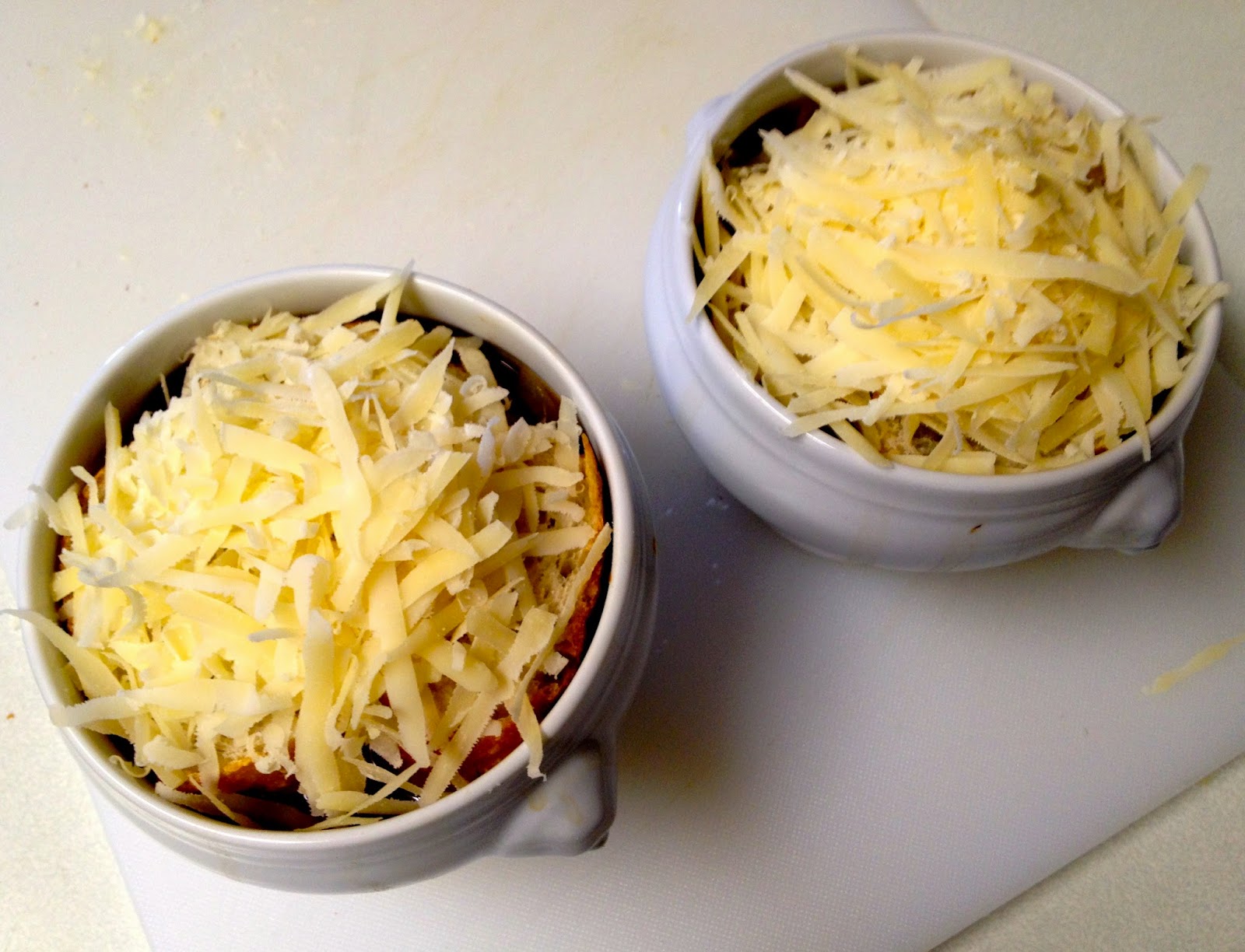