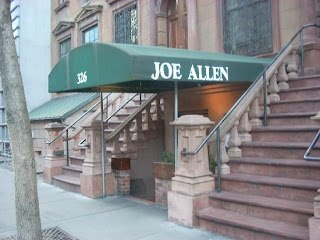 Joe Allen is on Restaurant Row in New York City.  This is a string of restaurants along 46th Street that handle hundreds of pre and post theater diners.  Orso is there as is its across-the- street competition for those hungry for Italian food, Barbetta.  The latter is still going strong after 105 years in operation by the same family!  And it’s still  crowded with fans of the TV series “Mad Men”, which has used the place as a set. But the crown jewel is the often celebrity-packed Joe Allen.  Lined with posters of failed Broadway shows, it’s a looky-loos delight.  One night we sat amazed as Liza Minelli departed the table next to ours only to be replaced by Sarah Jessica Parker, Matthew Broderick and Nathan Lane.  It’s that kind of place.

For years, the chopped steak was on the menu.  Then one day it disappeared.  I have no idea why the omission.  There is, of course, a hamburger on the list.  And since chopped steak is really like a supersized burger, if you ask for it your waiter will cheerfully produce the dish and its two accompaniments: Mashed potatoes, which I suspect have a pound of butter in each serving, and snow peas that have been simply steamed and cry out for more butter.  There are no substitutions permitted although you can opt out of the (delicious) potatoes and go for more snow peas than you will ever want to eat again. 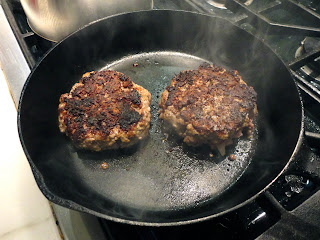 Now that I’ve been away from Joe Allen for some weeks, I craved a chopped steak.  How difficult could it be?  If I made a giant hamburger and put it into the hottest I could get our cast iron skillet, surely I could re-create Joe’s incredible crust and tender pink medium rare center.  You would think it would be that easy.  Well I am here to tell you, it’s not.  Now we have a stove whose burners serve up terrific heat.  If anything, I have more difficulty keeping things down rather than heating them up.  I would swear Joe’s chopped steak is cooked on a flattop.  There are no grill marks whatsoever to mar the beautiful char.   But even following the meager instructions I could find –heating the pan as hot as possible, using no liquid of any kind in said pan, I still could not get anything approximating Joe’s.

Did I surrender? No.  I was intent on making something in the same realm.  Something elevated from plain hamburger.  From there, it wasn’t a great leap to remember a lunch in Paris a few years ago.  I was alone.  I wasn’t there that many days when I found myself in a little bistro right on the Seine. There on the menu was “Bifstek Hache”.  I can’t claim that homesickness made me do it. But I ordered what has been described as ‘the posh hamburger of France’.  And it was delicious, made more so by the butter-y wine sauce with shallots that the patty sat in.  The key was clearly the meat.  None of that guess-where-it-came-from supermarket stuff labelled Top Sirloin or just 85 – 90 {4e4771bbe073b579fdd8e596ee487f65145483febbc8ba0a80525f62b26cad86} lean.  No, the key is to grind your own brisket or chuck, sirloin or rib and achieve a fat content of 20 to 30{4e4771bbe073b579fdd8e596ee487f65145483febbc8ba0a80525f62b26cad86} fat.  “Grind your own meat?”, you ask.  If you have a Cuisinart fitted with a steel blade, you can most certainly grind your own meat and achieve Steak Hache nirvana.  As a tribute to Joe Allen, I served snap peas with it.  But I replaced the mashed potatoes with a simple grape tomato and buratta salad with basil.  It was almost healthy.  Here is the recipe: 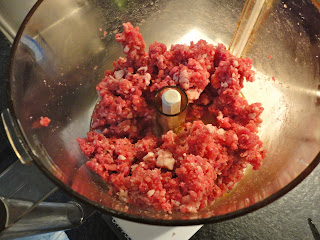 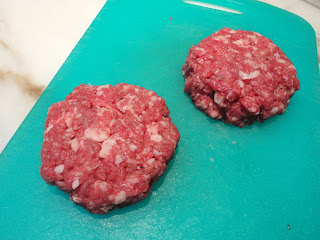 1. Divide meat mixture into 4 equal parts, then shape each into a large patty. Generously salt and pepper both sides of each patty.

2. Heat a large heavy skillet over medium-high heat. Do not add fat of any kind.  When skillet is very hot, add patties and sear until well browned on both sides, turning once, 2-3 minutes per side for medium rare. Transfer patties to a warm platter and loosely cover with foil. 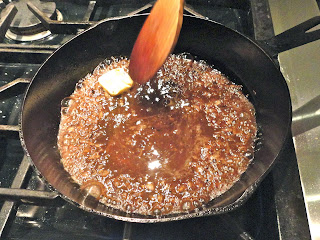 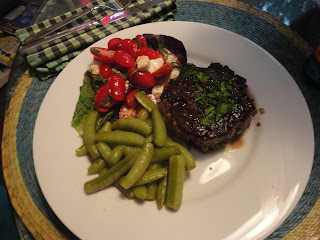 3. Discard fat from skillet and return skillet to medium heat. Melt 1 tbsp. of the butter in skillet, then add shallots and cook, stirring constantly, until they begin to brown, about 1 minute. Increase heat to medium-high, add wine, and cook, scraping browned bits stuck to bottom of skillet with a wooden spoon, until reduced by three-quarters, about 2 minutes. Add the cognac and cook 1 minute.  Add the beef broth and cook until reduced to about 3 tablespoons. Remove from hear and add the remaining 1 tbsp. butter, stirring constantly until butter is melted and sauce is thick and velvety, about 1 minute. Add parsley and season to taste with salt and pepper. Spoon sauce over patties. Serves 4.