Once again we’re celebrating Cinco de Mayo with a tried and true favorite.  This post is the # 2 most viewed page in all of Chewing the Fat’s history.   This sensational recipe for Enchiladas is hundreds of page views ahead of # 3.  The second recipe on the page, the one for Mexican Cole Slaw, is certainly reason too for its popularity.  Our records show hundreds of searches for the dish that have wound up on these pages.  So with Cinco de Mayo today, I wanted to share these two great dishes and wish you “Feliz Cinco de Mayo”. And I wanted to share a little of the fiesta’s history with you.  So here goes:
Cinco de Mayo, the celebration of all things Mexican, isn’t really celebrated in Mexico.  It is true that it commemorates the defeat by the Mexican Army of French troops in the Battle of Puebla on May 5th 1862.  However, only the state of Puebla shares the party spirit that is such a part of Cinco de Mayo in the US.   The rest of Mexico waits until September 15th to celebrate their Independence Day.  So how did Cinco de Mayo get to be an American tradition?  Apparently the holiday was created spontaneously by Mexicans and Latinos living in California during the American Civil War.  They supported the fragile cause of defending freedom and democracy by celebrating the unlikely victory by a Mexican Army over the greater fire power of France.   Who knew?

Regardless of which side of the border you are on, Cinco de Mayo is a great opportunity to celebrate with something distinctly Mexican to eat.  And Enchiladas fill the bill although this recipe has a somewhat more international background.
The word “Enchilada” actually means ‘dipped in chili’.  Enchiladas are sold on many a street corner in Mexico.  They are truly street food.  However, they have since ascended to the menu of virtually every Mexican restaurant in the world.   One of the most well-known of all Enchilada recipes came from two Gringo’s restaurant kitchen.  And it has little in common with its street food cousins.  For one thing, it’s milder, with far less heat and it’s more luscious—a creamy cheesy sauce gives it its name “Suiza” which means Swiss.  How it came to be is an interesting story.
At the turn of the 20th century, seeking his fortune, a young California-born pharmacist arrived in Mexico City.  His name was Walter Sanborn.  He was joined several years later by his brother Frank.  The two hermanos opened an eponymous Farmacia called Sanborns.  (Since there are no apostrophes in Spanish, they didn’t use one).  The Farmacia was a huge success in large measure because the brothers sped prescriptions by bicycle messengers to their customers.  At the time, the Mexican pharmacy system could take weeks to get prescriptions to their intended recipients.  What’s an enchilada doing in a pharmacy, you might well ask.  Sanborns first started serving food to keep their own employees on premises instead of having them rush home for lunch and a siesta.  Before long, customers were clamoring for their food.  The restaurants were soon responsible for 45 {4e4771bbe073b579fdd8e596ee487f65145483febbc8ba0a80525f62b26cad86} of Sanborns revenue.
Sanborns was a must stop for American tourists, including me as a very young boy in the 70s.   I can’t say that I had their Enchiladas Suizas.  But I went to find a recipe to write about for Cinco de Mayo, I realized it has a lot going for it.  It’s incredibly easy to make.  Not to go all Sandra Lee Semi-Homemade on you, I used part of a rotisserie chicken.  That eliminated having to poach or roast chicken breasts.  Adding canned green chiles lets you decide if you want more or less spice because you can choose mild or hot chiles.  The cheese in the dish can be varied as well.  The original calls for Cheddar and Monterey Jack.  I used Cheddar and Pepper Jack.
Finally, Enchiladas Suizas is one of those dishes that is almost better if it rests overnight and the cheese sauce is added just before it goes into the oven.  That makes it a perfect Cinco de Mayo dinner since you can make it ahead, and enjoy your Margaritas while it bakes away in the oven.  I served my Enchiladas with a wonderful recipe for Mexican Cole Slaw that I highly recommend.  It gives a new dimension to that dish.  It’s not just wildly colorful—it’s mayonnaise-free.   Which may just make up for the decadent cream sauce, the Suiza part of the enchilada.  Here’s the recipe:
Recipe for Chicken Enchiladas Suizas:
For the Filling: 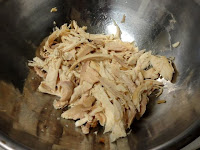 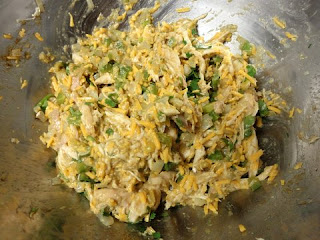 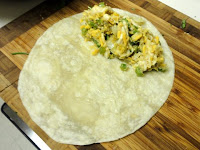 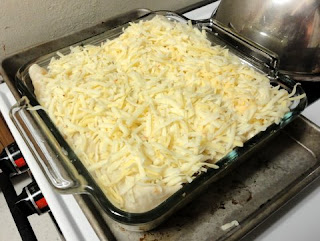 Preheat oven to 350 degrees. Grease 10x15x2-inch baking pan or 2 smaller pans. Place 1 flour tortilla on flat surface and place about 1/3 cup chicken mixture along 1 edge. Roll up from filling side, and place, seam side down, in prepared pan. Repeat process with remaining chicken mixture. Sprinkle Monterey or Pepper Jack over enchiladas
Combine cream and chicken broth and pour over enchiladas. Cover pan with foil and bake 30 minutes. Remove foil and continue baking 10 minutes or until thoroughly heated. Garnish individual servings with avocado, tomato and cilantro, if desired.
Recipe for Mexican Cole Slaw
This is truly a lazy cook’s dream recipe.  You can use bagged slaw and any garlic-y vinaigrette you have on hand. 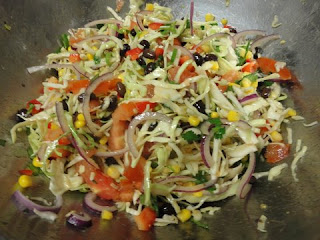 In a large bowl, combine all ingredients then pour over vinaigrette dressing. Toss and chill ’til serving.  Keeps well in the refrigerator for several days. Of all the foods we miss, simple Mexican food is high on our list. We are spoiled in the city living just a block from a Tacqueria that turns out Mexican favorites so good and so inexpensive, I seldom bother making them at home.  But […] Make anything you want on Tuesday. But make it Mexican!  It’s Cinco de Mayo 2020! Tuesday is May 5th, the annual American celebration of its neighbor to the south and the wonderful food the country is famous for.  As you may know Cinco de Mayo […]