A return to California with a recipe and reminiscence of one of the true greats of California Cuisine.

I came out to California this week as a guest of Viking Cruises. They’re naming the newest of their Ocean Cruise Ships, Jupiter and they are introducing their new Expedition ship concept. There’s a big Press contingent here and I will soon share with you all the Viking news. It’s great to be back in Los Angeles where I spent literally more time on business than I can now count. I literally spent weeks and weeks here. I was fortunate that, in my Advertising career, we really traveled first class.  My clients generally hailed from places where great restaurants were few and far between.  Whenever they would get to world-class cities, they reveled in staying in the best hotels and eating at top-rated restaurants.  It was heaven on an expense account.

Meeting the Great Man himself.

So it was that I found myself at a large table at Wolfgang Puck’s restaurant, Spago Beverly Hills (176 North Canon Drive Beverly Hills, CA 92010 Tel: 310-385-0880.) I’d eaten at Wolfgang’s original Spago above the Sunset Strip and was even fonder of his take on Chinese food at Chinois on Main (2709 Main Street, Santa Monica CA 90405 Tel: 310-392-9025)  Spago Beverly Hills was far grander than the original.  It was a huge hit when I landed there with my clients and the Agency team for dinner.  The place was Celebrity City that night.  Dolly Parton was there.  Penny Marshall was at another table. Maria Shriver, then the First Lady of California, sat a couple of tables away. Suddenly, Wolfgang himself strode across the restaurant, bypassing the star power and coming directly to our table.

The Secret of Wolfgang Puck’s Success.

Anyone with any interest in food knew Wolfgang’s larger-than-life success story.  How he’d arrived in Los Angeles, after a brief stop in Indianapolis, from his native Austria.  How, with his first wife, Barbara Lazaroff, he’d taken the culinary town by storm.  How he’d single-handedly upended the restaurant world with a mix of his own inventions: California Cuisine, a true fusion of the great bounty of California and the cuisines of Italy, France, and Asia.  To say that I was excited to meet him was an understatement.

Hero Worship has its ups and downs.

I went off…and on and on and on… praising the Chef for his contributions to gastronomy in general and myself in particular, extolling my delight at everything I’d ever eaten in every one of his restaurants.  I didn’t take a breath until I’d recounted how I’d just read an article about his annual summer vacations to visit his widowed mother in Austria; and how  I’d just ordered the Wiener Schnitzel which was asterisked on Spago’s menu as being “one of Chef Puck’s childhood favorites”.  I exhaled.  Chef Puck, I am sure, was anxious to retreat.
Seated at our table was my long-time friend and Television Producer, Maureen.  We knew each other extremely well having experienced everything from our car catching on fire on Beverly Boulevard to the discovery that one of our senior associates, a male, wore women’s underwear.  In addition to her incredible skills in creating TV commercials, Maureen is also one the funniest women alive.  She motioned to Chef Puck to draw near, whispered something in his ear and he whispered back.  “What did he say? what did he say?”, I demanded to know. “He said,”she replied, “ Vatever you do, don’t eat his Schnitzel”. 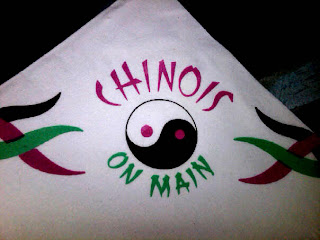 The schnitzel was delicious.  I enjoyed every bite of it.  However, I would have to say that my favorite of all his dishes is the one I am sharing with you today.  Since it is far and away Chef Puck’s most imitated recipe, I am not alone.  The Chinois Chicken Salad is a wonderful dish for summer.  It combines silky shredded chicken with Napa Cabbage, Romaine lettuce and julienned Pea Pods. The dressing is a tangy mix of Asian flavors, sesame and peanut oils, soy sauce and rice vinegar, with a jolt of Asian mustard.  The light and dark greens make it absolutely beautiful in the bowl.  The only change I’ve made to the original is the addition of a topping of crispy cooked Chinese noodles that take the place of croutons and give the same crunch to the salad.  I go whole hog and roast a whole chicken, as instructed by Chef Puck.  I am sure you can buy a rotisserie one instead.  But the method here yields a perfectly seasoned bird that adds a lot of flavor to the dish.  So, “Vatever you do”, make this chicken salad.  And, for a really good time, invite Maureen over to share it with you. Here is the recipe and another California Dish worth knowing about:

A crunchy crisp Chicken Salad with an Asian accent. A perfect example of why Wolfgang Puck is credited as one. of the fathers of California Cuisine