My latest Travel Article in Porthole Magazine has just been published…And here it is! Beautiful Budapest is a destination along the Danube River for cruise passengers coming both from the north, Amsterdam, and the east, Romania. The Danube runs right through the middle of the city that most don’t realize is actually two cities in one. Buda, on the Danube’s raised western bank, overlooks Pest from its hills capped with palaces and superb views. The city’s center for nightlife, restaurants and culture, Pest is where tourists most often find themselves. Today, a peaceful Budapest is as vibrant as any city in Central Europe with music, fashion, art, and entertainment are around every corner.

How to Get Around Budapest

Budapest is great value. You’ll need to use Hungary’s currency the Florint, here. Budget about $100 USD a day and you’ll be able to experience much of the city. A Budapest Card, at 22Euros for 24 hours, is your ticket to unlimited public transportation, museum entry, 2 free English language walking tours a day–even admission to one of Budapest’s famous thermal baths. First stop, The Aria Budapest Hotel (Hercegprímás utca 5). Housed in an old Insurance Company building, its creator, Czech American Henry Kallan, has a passion for music. It’s evident the moment you step in the lobby. Walk by a 130,000 Euro piano before taking the elevator up to the rooftop bar, open year ‘round, with its spectacular views of St. Stephen’s Basilica.

The Largest Church in Hungary

St. Stephen’s Basilica, right next door, is named for Hungary’s Patron Saint and first King, Stephen. Roman Catholic, it’s the largest church in Hungary. If you are up for it, climb the 364 stairs for a panoramic view from the bell tower. Second only in height to the nearby Parliament building, It’s a great way to get your bearings.

The Great Market Hall is a top culinary destination in Budapest. Completely restored in the 1990s, it gets high marks for the scope of its offerings including lángos, Hungary’s version of Pizza—deep-fried flatbread made with mashed potatoes and flour. But if you’re looking for a more local experience, close to St. Stephen’s you’ll find the Hold Utca market at Hold Utca 13, Budapest 1112. Fresh fruits and vegetables dominate the main level. The second floor is given over to food cart fare. In the center of the ground floor is Stand25, a not-to-be-missed bistro featuring the cooking of award-winning chef Tamás Széll. It’s also a great place to sample Hungarian wines and handcrafted beers.

A short walk from Hold Utca, past the American Embassy, you can take in modern Hungary’s history in Parliament Square. The building may look familiar. It was designed by the same architect as London’s Parliament Buildings.

Another moving pilgrimage is up next: The Shoes on the Danube Banks. Commemorating the thousands in the city killed by the Hungarian fascist group Arrow Cross Party during WWII, are 60 pairs of shoes made of iron. It’s a somber and moving reminder of the city’s history. 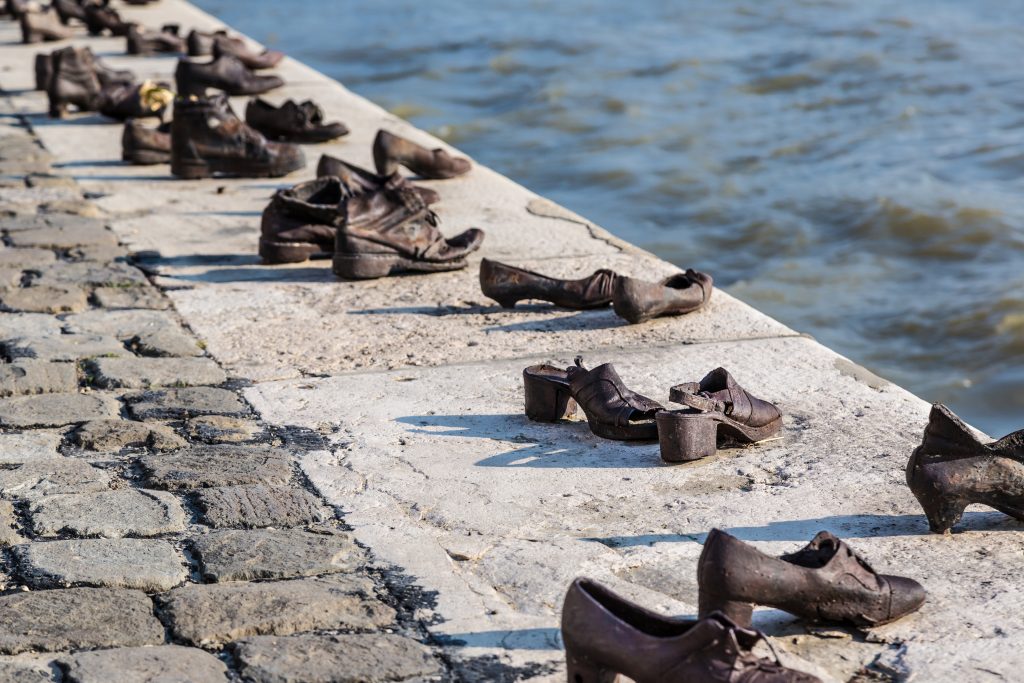 Shoes on the Danube Bank

Happier sights await across the river. Unless you’re in spectacular shape, hop on a bus to go up the hill to your second spectacular church of the day. It’s Matthias Church, named for yet another Hungarian King, Matyas. He has the distinction of having been married in this church–twice. The first thing you’ll notice is the diamond-patterned roof tiles. Don’t miss the interior where stencils cover every surface.

The church sits in front of the Fisherman’s Bastion. These seven towers represent the seven tribes of Magyars who settled the country in 895 AD. The views from here are among the city’s best with Pest laid out at your feet. 2 Szentharomsag Square Budapest 1014.

Time for a break? It’s a short walk from Matyas to one of Hungary’s best and oldest pastry shops, 200-year-old Ruszwurm at Szentháromsag St 7, 1014 Budapest. The tearoom looks like it hasn’t changed since Ruszwurm opened. If the weather is good, sit outdoors at their sidewalk café. Order their amazingly well-priced cakes, coffees or perhaps it’s time for a beer? If you only have room for one cake, a square of the eponymous Ruszwurm Cream Pastry explains why Ruszwurm is considered the best confectionary in Hungary. 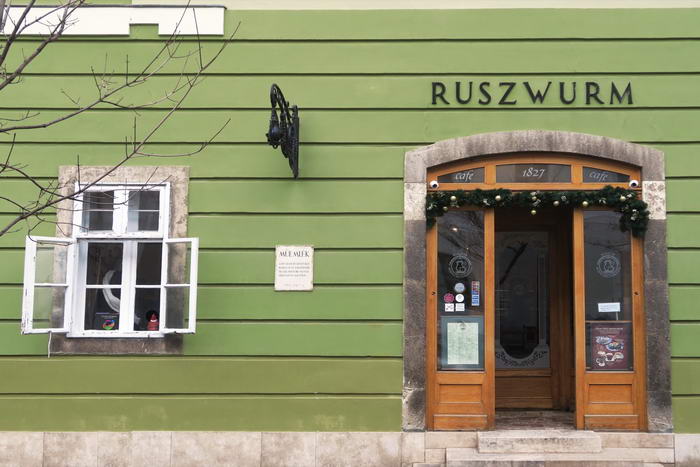 Stop in for the best pastries in Budapest | Photo: Ruszwurm/website

A short stroll from Ruszwurm, is Buda Castle, now home to the Hungarian National Gallery and The Budapest History Museum. Visit either one or take in the magnificent Castle Gardens, a World Heritage Site all on their own. The National Gallery’s collection brings Hungary’s vivid history to life. European masterpieces are also on view and rotating shows feature International artists like Mexico’s Freda Kahlo. The Royal Palace, Szent Gyorgy Square Budapest 1014. 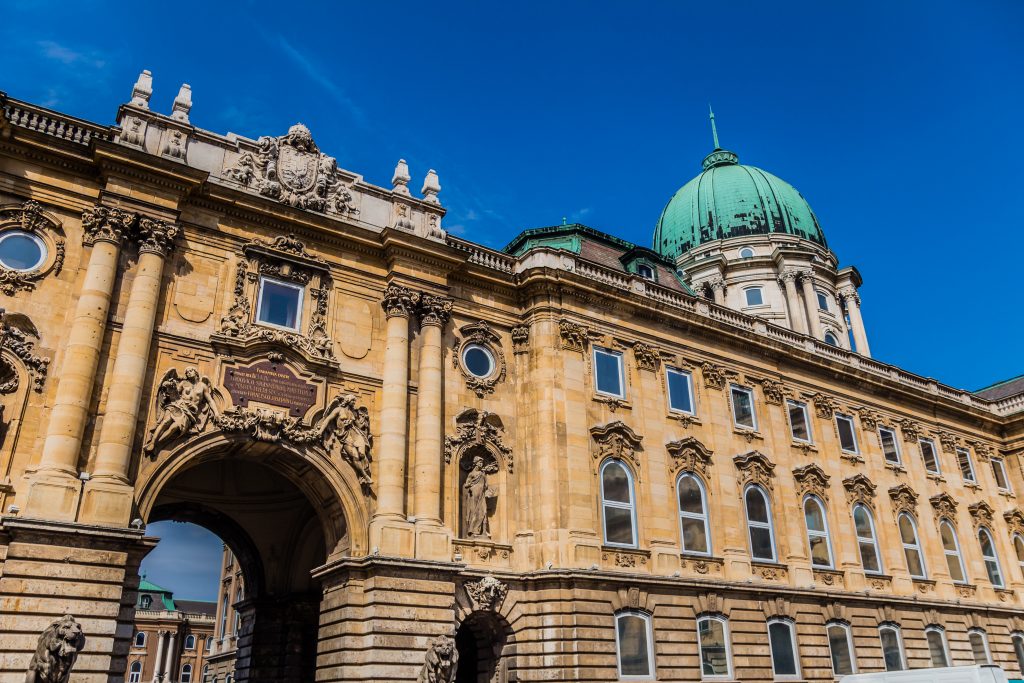 Have you visited Budapest on a Danube River cruise? Let us know your favorite parts of the city in the comments below! I’ve been writing about Budapest ever since I came back from there in August.  I was completely captivated by the place.  Of course, staying in the #1 Hotel in the World (Trip Advisor 2017) was a great deal of the reason why.  And it was […] My latest Travel Adventure has just been published…Come along for the ride!

8 Reasons You Should Take a Scenic Cruise Along the Danube River August 22, 2018. I am very pleased to introduce you to a new outlet that I am working with. It’s called Travel-Wise and it’s a compendium of original travel stories that I think […]